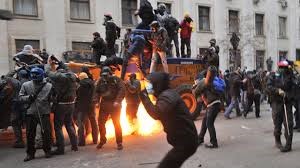 US, Ukraine or Middle East? Ferguson Images Made It Hard to Tell The images out of Ferguson, Missouri, looked more like what one sees in Middle Eastern hot spots than in a Midwestern town: peaceful protesters from an alienated minority brutally dispered by law enforcers armed with military-grade weapons.

To many Americans, the disregard for fundamental constitutional rights shown by Ferguson cops laid bare a deep-seated racism in at least one community in the U.S. heartland. But many observers around the world saw an even more disturbing dynamic at work.

In their eyes, Americans were exposed as hypocrites on human rights—promoters of a strict standard of behavior abroad while harboring the most egregious violations at home.

Countries with their own histories of human-rights abuses are now pointing at the treatment of blacks and protesters of all races in the U.S as proof of a self-righteous double standard. Even though the story is fading from the headlines, it is likely to have much longer-playing impact on foreign perceptions of the U.S.—and a profound role in the propaganda wars. (For our earlier coverage of Ferguson, please click here and here.)

IRAN: The U.S. has frequently denounced Iran’s violent suppression of dissent. After Ferguson, Iran’s Supreme Leader Ayatollah Seyed Ali Khamenei wasted no time in putting this on a Twitter account attributed to him:

Today like previous years, African-Americans are still under pressure, oppressed and subjected to discrimination. #Ferguson

RUSSIA: The Russian government, which rarely misses an opportunity to criticize the U.S., has said nothing official so far about the Ferguson unrest, but the Kremlin-backed TV network RT has covered the protests closely. “We’re currently in Ferguson, where tensions have been flying high ever since Saturday when 18-year-old Michael Brown was killed by multiple shots by police officers.” (Ironically,opposition figures in Russia worry that the police response in Ferguson will give Vladimir Putin—who often uses Western precedents to justify his own actions—an excuse to crack down on dissidents when it suits him.)        CHINA: China’s official Xinhua news agency said that Ferguson is an example of how America’s “racial divide still remains a deeply-rooted chronic disease that keeps tearing U.S. society apart.” It added: “The Ferguson incident once again demonstrates that even if a country that has for years tried to play the role of an international human rights judge and defender, there is still much room for improvement at home.” EGYPT: The U.S. has criticized this country for its brutal response to the Arab Spring, and the persecution of minority sects. Now its government is asking the U.S. to show “restraint and respect for the right of assembly and peaceful expression of opinion” Criticism From Allies Criticism from the world’s most democratic countries and institutions is harder to dismiss than the predictable gloatings and tut-tuttings of Iran, Russia, China, and Egypt. Media coverage from Britain—America’s staunchest ally, which suffered race riots after the shooting of a black teen by the London police in 2011—grew increasingly critical about events in Ferguson. The Guardian wrote that despite having a black president in office, “the use of armored vehicles and sniper nests in the height of a Missouri summer has exposed the extent and consequences of segregation in America’s heartland.” Another opinion piece was more explicit, describing Ferguson as a mostly black town “under occupation” by “a militarized police force that killed a black child.” The Telegraph newspaper sent one of its most experienced war correspondents, Rob Crilly, to cover the riots. For the first time in a career that has taken him to Sudan, Somalia, Afghanistan, Libya, the Middle East and elsewhere, Crilly was arrested for doing his job—in the middle of the U.S.A.

I have been arrested and am being walked away from the area — Rob Crilly (@robcrilly) August 18, 2014

European newspapers displayed the story on their front pages, and were critical of an ally that in years past pointed its finger at their own handling of civil unrest. Even the United Nations Secretary-General, Ban Ki-moon called on U.S. authorities “to ensure that the rights to peaceful assembly and freedom of expression are protected.” He also demanded that law enforcement officials abide by U.S. and international standards for dealing with demonstrators. Amnesty International, the global human rights organization, sent observers to Ferguson—the first time the group has ever deployed such a team within the United States.   Double Standard, Double-Edged Sword Of course, foreign observers are unlikely to appreciate the nuances of federal vs. local control of police forces under the U.S. Constitution. Just as few Americans are quick to grasp the theological differences between Sunni and Shiite Muslims or the historical twists and turns of the relationship between Ukraine and Russia. But Americans should have no trouble understanding how media watchers overseas might conclude that the U.S. is in favor of protests only when they happen far away and bring down hostile governments—especially if Washington has had a hand in lighting or fanning the flames of unrest.   So-called democracy-building campaigns funded by the U.S, have played a bigger role in fomenting anti-government activities around the world than is generally known.The Arab Spring, Syria, Libya and Ukraine all offer master classes in how the West creates “a people’s uprising.” Understanding how America is viewed from beyond its borders is essential to maintaining credibility in the eyes of friends and adversaries alike. In a world where military adventures carry demonstrable risks of blowback and out-of-control (even nuclear) escalation, a credible projection of soft power may be the best hope for defending legitimate national interests – not to mention advancing human rights wherever they are threatened. If media coverage of Ferguson teaches nothing else, it’s that images in the international marketplace are indeed worth the proverbial thousand words. The only way to amend such tell-tale pictures is to get serious about dealing with the reality of unremitting racism that lies behind them.   [box]WhoWhatWhy plans to continue doing this kind of groundbreaking original reporting. You can count on it. But can we count on you? We cannot do our work without your support. Please click here to donate; it’s tax deductible. And it packs a punch.[/box]