We originally published this in September, 2012. More relevant now than ever. Also be sure to see this other piece with views from Clark on oil and activism, and our other related stories by typing “Syria” in our search box. 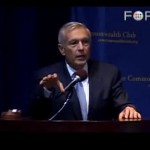