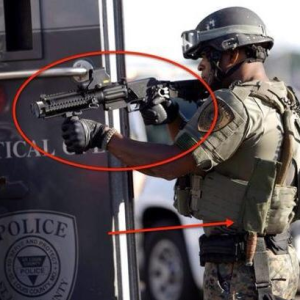 The Missouri National Guard’s deployment to quell rioting over the police killing of an unarmed black teen may mark the first time in U.S. history that putting soldiers on American streets isn’t an escalation of firepower.

The violence in Ferguson, Missouri, sparked by the death of 18-year-old Michael Brown is following the usual arc of a story about fraught race relations in America. Yet there is a big difference between this familiar tale and earlier ones, and it’s why Ferguson will make a different kind of history.

If accusations of excessive force by police, protests morphing into riots and deployment of the National Guard to quell the situation sound like parts of a familiar storyline, it’s because they are. The U.S. saw it most recently during the 1992 Los Angeles riots, set off by the acquittal of four white police officers in the beating of motorist Rodney King. The arrival of the National Guard is a regular feature in the history of American race riots.

This kind of event, typically, first sketches out the national racial divide in sharp relief, with the media cliché of “racially charged” setting up expectations for what’s coming next. Then the sides in the debate emerge and the narrative battle begins in earnest, alongside the street fighting. Sometime later, a unifying message like “Can we all get along?” surfaces, and around that, come the stories about unity and the process of healing.

It’s too early for that kind of closure in Ferguson, and there’s a big reason why that may not be how this ends.

Ferguson’s tale stuck to the race-riot script until the police responded to the protests, the rioting and the looting ignited by Brown’s death. The police show of force shocked the nation: huge armored vehicles on patrol, with officers in camouflage, body armor, helmets and gas masks, wielding battlefield hardware like assault and sniper rifles. The images drew visual comparisons of soldiers on patrol in Iraq and Afghanistan—comparisons too striking to ignore.

Attorney General Eric Holder, usually firmly on the side of expansive government power, expressed a deep concern “that the deployment of military equipment and vehicles sends a conflicting message.”

The public outcry over what’s happened in Ferguson hasn’t been marked principally by the usual polarizing racial divisions. The flashpoint has been by color-blind fury at the military weaponry and police heavy-handedness on display. Former soldiers have expressed anger, and pointed out that even if the police have the arsenal, they don’t have the training and discipline to operate like the military.

Ferguson is not an isolated example of this phenomenon. The flood of free surplus military weapons into police departments large and small is a problem that’s been growing nationwide since the drawdowns in Afghanistan and Iraq. The Department of Defense program that hands out the weapons has been in operation since 1990, when it was conceived to ensure police weren’t outgunned in the drug war.

It’s under a similar conceit of exaggerated threats that the program blossomed during the “war on terror.” The billions of dollars in Homeland Security cash-cow programs have given license to police departments to snap up everything they can. (For our earlier coverage of this issue, please click here and here)

To see how easy it is for police to score military hardware like the Mine-Resistant Ambush Protected (MRAP) vehicle (shown below), take a look at this website where the law enforcement agencies patrolling Ferguson may have gotten their battle gear. 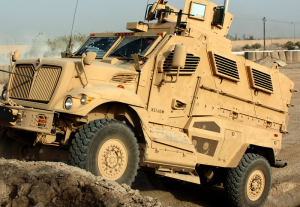 The deployment of equipment like that is why Ferguson has more in common with the near-martial law lockdown in the aftermath of the Boston Marathon Bombing than it does with the L.A. riots. In Boston, there was a glimpse of the Homeland Security-industrial complex in the form of the presence of private security contractor Craft International, which trains law enforcement in military tactics.

Yet in Ferguson the police went further than just rolling out with battlefield equipment and a military mentality. They arrested and attacked journalists, and peaceful protesters alike.

The response and violation of civil rights drew widespread criticism from ordinary people and President Obama, who said there was “no excuse for police to use excessive force against peaceful protests, or to throw protestors in jail for lawfully exercising their First Amendment rights” or journalists for doing their jobs. (New York Times reporter James Risen has something to say about that last contradiction.)

There is no reason to think that the confrontation isn’t also about race, the still-lingering effects of segregation and the feeling among American blacks that police and courts treat them unfairly. Ninety-three percent of Ferguson’s 512 arrests stemming from a vehicle stop last year were of blacks, according to data from Missouri’s Attorney-General. That’s against a black population of about 63 percent.

Nor is there any reason to think that it isn’t about economic inequality caused in part by the political control of Ferguson’s patronage by whites and the situation of enmity and disenfranchisement that creates.

That’s why the circumstances of Michael Brown’s shooting, subject of an FBI civil rights investigation and a state probe, will matter to a lot of people. For that reason, the question of his image as either a good boy or a strong-arm robber who had marijuana in his system will be much discussed. So, too, the results of the three autopsies on him will be debated until the justice system renders its verdict.

However, there is every reason to think that the confrontation in Ferguson will eventually be remembered more for its demonstration of the growing American police state and erosion of civil liberties since 9/11. Even President Obama, not one to routinely challenge the security apparatus, has proposed a second look at the Defense Department program:

“It’s probably useful for us to review how the funding has gone, how local law enforcement has used grant dollars, to make sure that what they’re… purchasing is stuff that they actually need. Because, you know, there is a big difference between our military and our local law enforcement, and we don’t want those lines blurred. That would be contrary to our traditions.

So whether military hardware stays on Main Street is to be decided by the same federal government that has been putting it there for a quarter-century. It remains to be seen if Obama’s nascent initiative, and other Democratic-led efforts in the House and the Senate, will have a practical effect before the headline-driven political will for action dies down.

The outcome will determine if Ferguson is remembered as another stain on the history of U.S. race relations, or as a landmark event in the struggle against the post-9/11 expansion of the American security state.

8 responses to “Missouri Burning: When the Army Isn’t More Firepower”