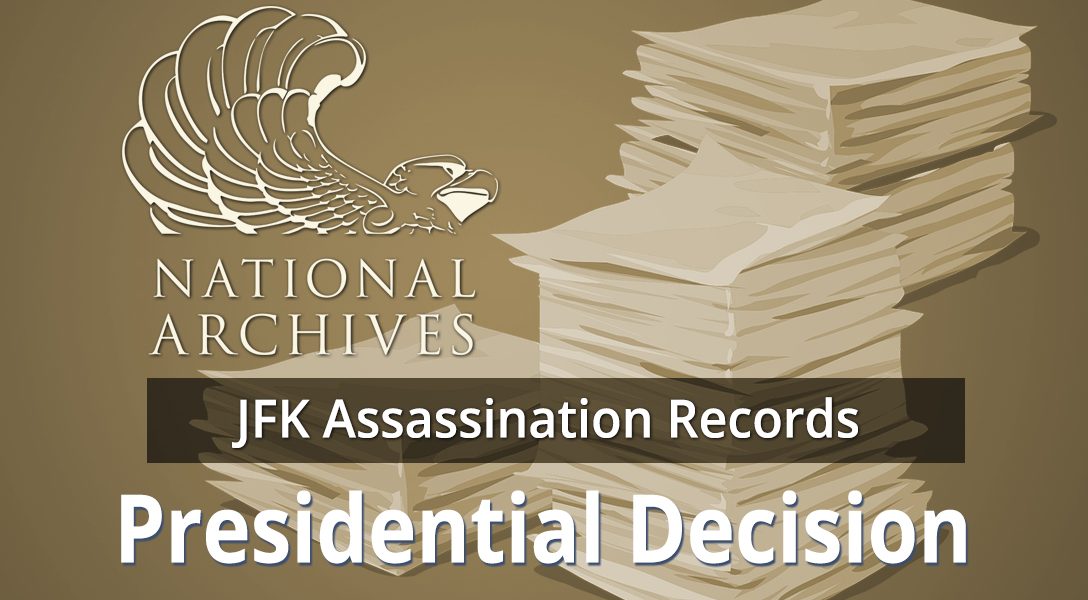 Time’s Up: Trump to Decide If JFK Records Remain Hidden

Nearly 55 years after the assassination of President John F. Kennedy, the drama and mystery surrounding that dark day in Dallas is still unfolding — in large part because the government has for many years refused to release all relevant documents.

That was supposed to change last year. The John F. Kennedy Assassination Records Collection Act of 1992 gave the US government 25 years to release most of the documents that had either not been seen by the public or had been heavily redacted. The original deadline was October 26, 2017.

However, while President Donald Trump had initially indicated that he would release all of the documents the disclosure law covered, he made a U-turn at the last minute. Instead he announced that, even though they have already had a quarter century to review all assassination-related records, he would give various agencies, including the CIA and the FBI, an additional six months to examine the documents to determine whether any of them should be withheld for reasons of national security.

That new deadline is today. In theory, either Trump or somebody else in the US government should announce what will happen with the remaining tens of thousands of records. However, if history is any guide, anything is possible.

For decades researchers and enthusiasts have been searching government documents for clues and confirmation about who killed Kennedy. Most establishment media have repeated the narrative of the Warren Commission — the first government investigation into the assassination — that 24-year-old ex-Marine Lee Harvey Oswald was the lone-nut assassin. But another government body, the House Select Committee on Assassinations (HSCA), found that the president was killed as the result of a probable conspiracy, while many competent researchers over the years have expressed doubts about the conclusions of the Warren Commission.

The president’s October decision came as somewhat of a shock to researchers and interested citizens. Anticipation was high leading up to the decision, as the president himself helped stir interest. When he did not deliver as expected, some claimed that the president had folded to “deep state” pressure.

In the following months, the National Archives and Records Administration (NARA) released approximately 30,000 records in a handful of batches. About 10 percent of the files had never been seen by the public, while most of the rest were previously released in the 1990s, but in redacted form.

However, even in those files released last year, a majority still contained redactions. Some of the files only have certain words blocked out, while others have paragraphs and even entire pages hidden.

(For examples of important files with major redactions, see here, here, and here.)

Researchers were pleased that NARA released all of the files online in pdf format, as well as some audio files, making the files instantly accessible to a global audience. This was certainly an improvement over releases from previous decades, which necessitated a physical trek to the archives building, requesting specific documents, and time-consuming photocopying.

But many were disappointed in the delay by the Trump administration, as the agencies had 25 years to prepare since the original law was signed in 1992.

Dan Hardway, a former staffer on one of the original congressional investigations into the Kennedy assassination, expressed his frustration with the release process and its lack of full disclosure:

These files are not in compliance with the law no matter what the mainstream media says. They are an in-your-face flipped bird to the American public. They basically tell us that the CIA is saying that it doesn’t have to comply with the law of the land and that it will not tell us its secrets and that there is nothing we can do about it.

Attorney Jim Lesar, president and co-founder of the Assassination Archives and Research Center (AARC), told WhoWhatWhy he is pessimistic about the chances for full transparency.

Congress and the establishment press need to come to grips with the fact that we’ve been promised that the JFK Act would provide the information that would enable people to answer questions about the Kennedy assassination, and we’re not going to get it. We haven’t gotten it, and it’s quite clear that there are going to be a ton of unresolved issues after more than 50 years.

There were other hiccups as well. As WhoWhatWhy exclusively reported, approximately 3,000 previously redacted or non-public files were missing from the 2017 releases. It’s still not yet clear why all of those files were not included or if they will be released today.

For those skeptical that Lee Harvey Oswald was the lone-nut assassin of the president, there has been as yet no smoking-gun document produced proving a conspiracy. Many researchers, even those skeptical of the official narrative, doubt that such a document exists, if it ever did.

But there have been important revelations, such as WhoWhatWhy’s exclusive story showing  that Earle Cabell, the mayor of Dallas at the time of Kennedy’s assassination — who was instrumental in the planning of the motorcade route that exposed the president to astonishing risks — was a CIA asset.

There have also been important discoveries of new facts and confirmation of suspected information regarding CIA operations in Cuba, as well as its spy networks, cryptonyms, and connections to the mafia.

The work is painstaking and ongoing, as researchers and historians try to meticulously fit together pieces of a larger puzzle with many missing pieces.

Can we accurately predict what the president will do today? Probably not. Lesar makes clear that we don’t really know what kind of negotiations are happening behind the scenes. “You don’t know to what degree he is willing to accomodate with the intelligence officials. … We don’t really know the extent to which his personal survival is affected by the declassification.” He speculated that, considering the ongoing investigations into the Trump campaign and talk of impeachment in the press, it’s possible that the president could be using the releases as a bargaining chip.

Whatever happens, we’ll be watching closely. Please check back with us today as we bring you the latest news from the White House.