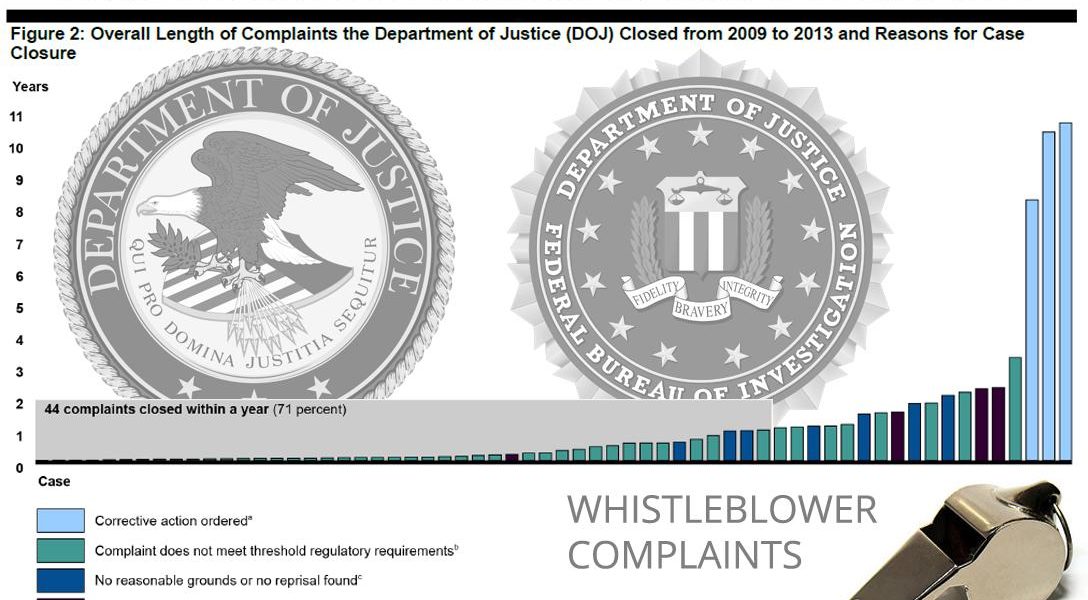 There are few things in Washington that garner bipartisan support these days. Protecting Federal Bureau of Investigation (FBI) whistleblowers is now on that short list.

On Thursday, the chairman of the Senate Judiciary Committee and the ranking Democrat on the panel jointly introduced legislation to better shield from retaliation Bureau employees who report waste, fraud or misconduct. FBI whistleblowers are among the most poorly protected in the federal workforce.

“Inconsistent and confusing disclosure rules and perpetual delays in retaliation investigations have left well-intentioned whistleblowers without adequate protections from reprisal.”

Former agent Michael German, a 16-year veteran of the Bureau, is one of the best-known FBI whistleblowers and his case illustrates that retaliation against those speaking out could weaken national security.

“I experienced two years of sustained and collaborative retaliation that pushed me out of the FBI, despite a career of superior performance and an unblemished disciplinary record…”

“I know the toll exacted on whistleblowers because I resigned from the FBI after this system failed to protect me from retaliation for internally reporting a mismanaged terrorism investigation,” German testified before the committee earlier this year.

After reporting the problem, he was ostracized from further participation in that investigation (which was in Tampa, Florida) and, it was threatened, he may never be allowed to work undercover again. Not long afterward, German was informed that he was being investigated for unauthorized travel and for spending $50 in case funds — a probe that was apparently bogus, and was later dismissed.

“In effect, the Inspectors had performed a retaliatory investigation against me on behalf of the Tampa managers involved in my complaint,” German testified. “I believe the only reason they told me they did this investigation was to warn me they would entertain even the pettiest allegations against me if I continued pursuing the whistleblower complaint.”

In addition, the FBI officials German had complained about were informed of the complaint — and who made it.

And, after he began working on a different terrorism probe, in Portland, Oregon, an assistant director of the Bureau’s Office of Professional Responsibility (OPR) told the case agent and the supervisor that German’s involvement in the investigation was “problematic” — because he was a whistleblower. OPR is the entity supposed to handle whistleblower complaints.

“While these concerns might seem cynical, I experienced two years of sustained and collaborative retaliation that pushed me out of the FBI, despite a career of superior performance and an unblemished disciplinary record,” German testified. “High-level FBI officials who had nothing to do with the original complaint initiated adverse personnel actions against me because they heard I was a whistleblower.”

Grassley hopes his legislation — the FBI Whistleblower Protection Enhancement Act — will help agents like German who have the courage to come forward and report problems. It would not only expand outlets for protected disclosures but also improve the process to halt reprisals.

Earlier this year, the Government Accountability Office determined that the FBI awarded corrective actions in only 3 out of 62 whistleblower retaliation complaints.

Some of the complaints were dismissed in part because the whistleblowers had reported a problem to somebody in their chain of command who “was not one of the nine high-level FBI or DOJ entities designated under DOJ regulations to receive such disclosures.”

In other words, whistleblowers were not protected from retaliatory actions simply because they went to the wrong person with their complaint.

The new bill would change that by extending whistleblower protections to FBI employees who make disclosures to their supervisors. It would also make clear that Bureau staff can take their complaints directly to members of Congress.

“Whistleblowers serve an essential role in providing transparency and accountability in the Federal government,” said ranking Judiciary Committee Democrat Patrick Leahy (VT). “It is important that all government employees are provided with strong and effective avenues to come forward with evidence of government abuse and misuse, and that they have protections from retaliation.”

The bill would also end the practice of the Bureau itself investigating FBI whistleblower complaints. Instead, all cases will be investigated by the Inspector General of the Department of Justice (DOJ), which will issue annual reports on the outcomes.

Even FBI Director James Comey appeared to agree that Bureau employees blowing the whistle must be protected.

“I think it’s very, very important that we create the safe zones that all of our people need to raise concerns that they might have,” Comey said at a December 9 committee hearing; he pledged to work with the lawmakers on strengthening those protections.

With the various problems that have plagued the FBI over the years, and which have been detailed by WhoWhatWhy (for example here, here, and here) as well as by Grassley, stronger whistleblower protection will improve accountability at the Bureau and give the public more confidence in the justice system.