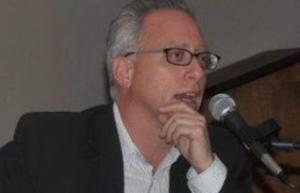 Double and Even Triple Government: Russ Baker on Deep Politics and the Bushes My guest today is Russ Baker, forensic journalist, author and founder of WhoWhatWhy. Welcome back to OpEdNews, Russ! Last week you wrote a piece called The “Double Government” Secret Gets Out. What can you tell any readers who might have missed it? And why is this such an important story?

RB: Well, no reason to “miss it.” Please click the link and then I’ll just assume anyone here has read it and I’ll proceed to expand upon it.

JB: Thanks for that!

RB: I think it is an important story because for very, very long, the media in the U.S. has by and large denied the reality of the degraded state of democracy and freedom. Its nature is to be simplistic and incremental. At WhoWhatWhy, we’ve felt a bit like outcasts trying to get people to see what is happening to our country. Now, we’re pleased to see some elements of the “establishment” beginning to move, ever so slothfully, to acknowledge the crisis.

JB: Why has the Boston Globe finally, suddenly decided to jump into the fray? They’ve been pretty quiet on this issue up to now, correct?

RB: They have not actually been quiet on the issue—they’ve been on the wrong side. Their coverage of the “9/11 of Boston”—the Marathon bombing—has been little short of disgraceful. They quickly accepted whatever law enforcement told them, even when there were signs everywhere that a cover-up of some kind was afoot. (Be sure and see our ongoing series on the Marathon bombing, for example http://whowhatwhy.org/2014/10/02/boston-update-fbi-war-on-marathon-bombing-witnesses-continues/ )

JB: I stand corrected. In that case, though, isn’t it even more surprising that the Globe is suddenly open to reason? How do you account for the shift, Russ?

RB: Well, I don’t know if we can claim total credit, but WhoWhatWhy has, as of my most recent count, published 18 articles questioning the conventional narrative on that incident. And a poll from a few months ago showed 40 percent of Bostonians skeptical. That’s a fair amount of pressure, even for a big dominant local player like the Globe.

JB: So, did they do some long-overdue serious investigative journalism? And what is this secret “double government” exactly? Whatever it is, it doesn’t sound good, that’s for sure.

RB: Naw, but they did run a couple of pieces about a book by a “respectable” person starting to edge into the territory we’ve been blazing for several years—the idea that while we put all our attention on what the president and Congress do and don’t do there’s a whole other apparatus calling the shots. It’s that old combo Ike warned about—the one percent and their allies in the permanent part of government—intel agencies, Pentagon, bureaucracy throughout.

JB: Tell us a bit more about the “respectable” book and author that launched the Globe’s about-face. We need something to sink our teeth into, beyond generalizations about the evils of the 1%.

RB: A Tufts professor wrote a book on the “Double Government.” I haven’t read it yet, but his thrust is that a president’s will can easily be thwarted by the non-elected part of Washington. The point for me is that the mainstream media is willing to embrace critiques that get beyond the fantasy of a viable democracy where we choose our leaders and they do our bidding. What’s generally missing, even probably from his book, is the notion that it is not really the “double government” that drives things, but private capital. And then we begin to come to terms with why we never seem to get what we want—or what we are promised by the pols.

JB: Is there a tie-in between this reputed “Double Government” and the Bushes, the subject of your 2010 book, Family of Secrets? If so, what is it?

RB: Well, I haven’t read the professor’s book yet, but I highly doubt he mentions the Bushes in any detail. Academia generally shies away from anything too controversial. But I’d say the Bushes themselves embody the notion that elected officials are only successful to the extent they have deep links into the Double Government—and funding and support from…ahem…the Triple Government. My research for Family of Secrets really underlined the extent to which secret events and alliances shape our country’s course constantly.

JB: Well, that’s certainly a teaser, Russ. What are you referring to? Can you give us something more concrete to sink our teeth into, to mix a metaphor? It could ultimately cause a groundswell of interest in your book, you know!

RB: Well, what I found is difficult to sum up in just a few sentences, because the facts are so incredibly disturbing, and run so counter to what we’ve been told up to this point. There’s a fantasy in this country that our politicians, as occasionally criticized as they are, fundamentally are gentlemen and gentlewomen. We treat them like celebrities or royalty. But power accrual and wielding is an ugly business, more akin to other lines of work that are about ruthlessness. Anyway, handicapped by not being able to present my thousand-plus footnotes here, I’ll just present a few particulars on the Bush clan:

Bush 41, HW Bush, was in the secret employ of the intelligence services decades before he was appointed as a supposed newcomer, to the CIA directorship. Among other things, he was part of a group, inside and outside CIA, that felt threatened by JFK and furious at him. He hid the fact that he was in Dallas the day Kennedy was shot. He was a good friend of Lee Oswald’s mentor. He was mentioned in FBI documents related to the assassination and to Cuban exiles who were enraged at Kennedy.

He and his family were, secretly, principal sponsors of Richard Nixon’s career. But when Nixon tried to buck his handlers, they turned on him. The real story of Watergate is the framing of Nixon by others in the Republican camp.

JB: Hold on a second, Russ. Why did Bush and Co. want to get rid of Nixon? Didn’t they like him initially?

RB: I devote three chapters of Family of Secrets to unraveling the mystery of the relationship between Nixon and George H.W. Bush. I spent a long time investigating—discovered they anointed him to be the pawn of banking interests, but over the years he chafed at being dominated. Then he began seriously challenging the corporate folks. And then he was out.

JB: I had no idea. That’s quite a backstory. Sorry for the interruption. I was just curious. Nixon was such a nemesis in American history.

The Bushes, including George W., were up to their elbows in bizarre massive money movements and odd companies that never seemed to be about actually turning a profit—populated by the Shah of Iran, the Saudis, Ferdinand Marcos, Harvard University, and other rogues and mainstays.

Much more on this in Family of Secrets—about 600 pages of this kind of stuff. Enjoy!

JB: Yikes! 600 pages of “this kind of stuff”? I’m not sure that “enjoy” is the operative word here. What happens with all these explosive revelations? The Bushes seem pretty impervious to major scandal or outrage which this might have engendered in years past. How has your blockbuster been received? Has the corporate media just ignored you? Does everything just get swept under the rug?

RB: The corporate media—and so-called “progressive” and “alternative” news sources as well—have almost completely ignored these discoveries. Why? Laziness and discomfiture with major openings that could fundamentally shift our understanding of how things work. Everyone’s in on the game of “left-right” that keeps members of the public at each other’s throats while the one percent of one percent of one percent keeps on driving the train. The good news is that Family of Secrets has sold close to 100,000 copies, is in libraries across America, and likely has been read by half a million people.

JB: Good news, indeed. I had no idea!

RB: The web and some radio outlets have made it possible to go around the gatekeepers. And more and more people get that there is a giant con being perpetrated year after year, with elections the “bread and circuses” we all demand as a substitute for real introspection. More WikiLeaks, more Snowdens, more of the kind of work being done by “renegade” journalists and a growing army of activists, and we’ll get to critical mass. JB: Based on what you’ve said and what I’ve read, how are things shaping up with the Bush Co. vis a vis 2016? Are we in for, God forbid, a permanent Bush-run, Republican dynasty?

RB: I would say that, due in large part to a complacent and docile media, plus a public with little long-term memory, we are very likely in for a third President Bush, aka Jeb. And, if I were to peer into a crystal ball, I’d say that in a dozen years or so we might see a fourth President Bush, in the person of Jeb’s son, George P. Bush. Just elected overwhelmingly to state office in Texas! Half-Hispanic! That will wow the same media that brought us Barack Obama.

JB: If that’s the case, do you worry that your work will be some day burned, banned or outlawed? Has everything you’ve learned so far caused you to pretty much given up on our restoring any semblance of a true democratic system or do you somehow hang on to a bit of cautious optimism?

RB: I am always alert that things can go very bad very quickly in any society. I do see signs of that possibility here. The Boston Bombing with the related apparent cover-up, harassment of witnesses, passivity of the media, tolerance of disappearing public rights to privacy and inquiry into law enforcement actions—this kind of situation is deeply disturbing. At the same time, I see the rise of a vigilant opposing sector, and remain both hopeful and energized—because, what option do we have?

JB: Agreed. Anything you’d like to add before we wrap this up?

RB: In the end, we are only as good as what we know—and what we do, armed with the information. At WhoWhatWhy, we’re a nonprofit, non-commercial outfit devoted solely to digging for the truth and providing it to the public. We hope your readers like what we’re doing. We welcome their ideas, and their support.

JB: While much of what you had to say today was not easy listening, Russ, keeping our heads in the sand is just not a viable option. I’m glad so many people have been reading Family of Secrets. Thanks so much for talking with me again. Keep up the good work over at WhoWhatWhy! RB: Thanks, Joan. You are a delightful conversation partner.

JB: Why, thank you! Likewise!

My other interviews with Russ: