The “Double Government” Secret Gets Out - WhoWhatWhy
Reading Time: 4 minutes

You know something is going on when the cautious Boston Globe publishes not one, but two, pieces dealing with the “double government.”

This cryptic phrase encapsulates a serious claim about the American body politic: That a permanent and largely unaccountable bureaucracy keeps on doing what it wants to do, no matter who the voters elect to the White House.

Both of the Globe articles refer to “National Security and Double Government,” a book by Michael J. Glennon, professor of international law at Tufts University. From the descriptions of its contents (we haven’t read the book yet, but we will—and perhaps excerpt), the author is talking, with due academic caution, about an out-of-control security/military apparatus.

The fact that the Globe thinks this book is important enough to warrant not one but two analytical pieces is significant, because Boston was the scene of the mysterious Boston Marathon Bombing.

In the aftermath of that tragedy, the national security apparatus and its allies in the media, academia and corporate America (including, significantly, the Globe itself) rushed to discourage us from looking deeper at what happened—while at the same time the nat-sec folks used the event to further expand their influence at the expense of civil liberties.

One of the Globe’s pieces was a highly favorable review of Dr. Glennon’s book by former Republican Congressman Mickey Edwards. Edwards, a co-founder of the staunchly conservative Heritage Foundation, has over the years become more and more of a maverick—and more outspokenly alarmed by the path America has taken.

The other piece, which appeared in the Globe the same day,was a Q&A with Glennon. The astonishing headline was:

Vote all you want. The secret government won’t change.

The sub-headline wasn’t much tamer:

The people we elect aren’t the ones calling the shots, says Tufts University’s Michael Glennon

The genesis of the book was a question that confounded Glennon about President Obama: How did a man who won election pledging to change the national security policies of his predecessor effect so little of that? Here’s what Edwards wrote in his review:

The answer Glennon places before us is not reassuring: “a bifurcated system — a structure of double government—in which even the President now exercises little substantive control over the overall direction of U.S. national security policy.” The result, he writes, is a system of dual institutions that have evolved “toward greater centralization, less accountability, and emergent autocracy.”

The paradox, Glennon says, is that this barely accountable government machinery actually arose from President Harry S. Truman’s attempts to reduce the military’s growing and unchecked power. The unforeseen outcome was the growth of an unaccountable civilian power center.

No Secret Conspiracy (Or Theory)

Glennon’s was hardly the first well-reviewed book to deal with this topic. In 2009 Janine Wedel, an anthropology professor at George Mason University, published Shadow Elite, which received lavish praise from Arianna Huffington and the endorsement of her “book club,” despite the fact that the Huffington Post itself has a strong aversion  to  publishing “conspiracy” stories. 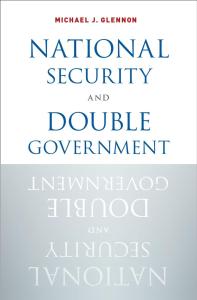 Perhaps Wedel avoided being tarred with the hackneyed “conspiracy theorist” because she argues that the shadowy networks she describes are not necessarily criminal or in cahoots with multinational corporations, but merely the outgrowth of powerful and self-replenishing (if often incompetent) elites.

Glennon will likely avoid the damaging label as well, with extensive research and more than 800 footnotes in his book to back up his thesis. The author “is hardly the sort to engage in such fantasies,” Edwards wrote:

This is no secret conspiracy nor a plot to deprive Americans of their civil liberties. It is the unintended consequence of a thoughtful attempt to head off the very threats that those attempts have inadvertently created. But if Glennon’s book is enlightening it is also scary. And it’s not fiction.

Glennon turns to a familiar explanation—that every nation gets the government it deserves—to bolster his argument as to why the double government has been able to flourish:

“The ultimate problem is the pervasive political ignorance on the part of the American people. And indifference to the threat that is emerging from these concealed institutions,” he told the Globe.

Of course, the notion that the American political process and a largely compliant and docile media keep focusing attention on the wrong people and institutions is one of WhoWhatWhy’s central themes. This heretical insight is typically pooh-poohed in the corporate media and even in the so-called alternative media. Any attempt to raise the lid on what’s been called Deep Politics is routinely disparaged and condemned as the droolings of the deranged.

Well, everyone has his or her own comfort level with uncomfortable material. Some may need a credentialed professor or two to start the conversation, and a major newspaper to weigh in favorably, before they dare open their minds.

We won’t complain. We’re just glad to know that we were sane all along.

Next (though we aren’t holding our breath for this) we hope to see the Boston Globe publish an in-depth investigation of that sub rosa “Double Government” and its peculiar handling of the Boston Marathon Bombing—which to our eyes has, at best, the hallmarks of a security-fail cover-up. And an incident that considerably expanded the rationale for, and power of, the same NatSec establishment that has belatedly so alarmed the Globe.

37 responses to “The “Double Government” Secret Gets Out”