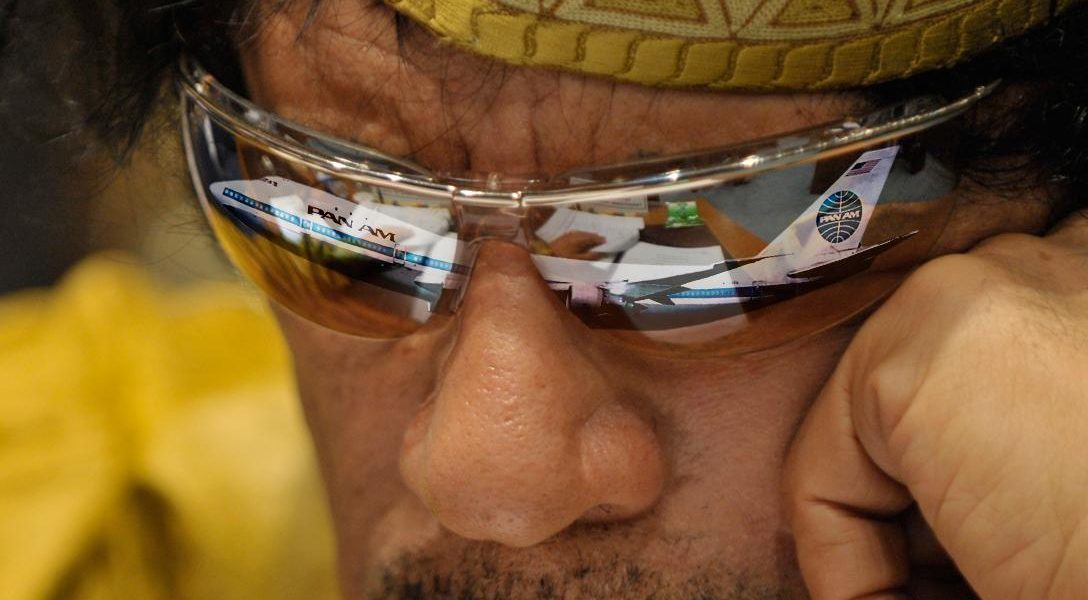 This originally appeared in 2012 I first learned about the death of the “Libyan bomber” Ali Megrahi from a television screen. The sound was off, but I could see the closed captioning on CNN. Newspeople and guests were talking about the terrible thing Megrahi had done, and the closure or lack thereof from his passing. One man was noting that the perpetrator was a high official of Libyan intelligence, and that the 1988 bombing of Pan Am 103 had been ordered at the very top—by Muammar Qaddafi. The deaths of 270 people, 189 of them Americans, it was implied, justified last year’s removal of Qaddafi, and the dictator’s own abrupt and horrible death.

But there’s something wrong with that scenario.

How do I know? I read the New York Times. Especially the best part…..the fine print.

The Times Opens A Door…and Shuts It

Check out this article, from Robert McFadden, the Times’ septuagenarian obit writer and rewrite man extraordinaire. Under the appropriately neutral headline, “Megrahi, Convicted in 1988 Lockerbie Bombing, Dies at 60,” McFadden nailed the true import of Megrahi’s death in the second paragraph:

The death of Mr. Megrahi, who insisted that he was not guilty, foreclosed a fuller accounting of his role, and perhaps that of the Libyan government under Col. Muammar el-Qaddafi, in the midair explosion of Pan Am Flight 103, which killed 270 people, including 189 Americans.

Most of the front half of the article lays out the conventional line on the plane that blew up over Lockerbie, Scotland. But anyone getting to the latter part will notice that it is dominated by evidence casting doubt on the official story.

Thus, if you read those second-half paragraphs carefully, you see what the reporter (and perhaps his bosses) may actually wonder: whether Libya was framed by some enemy, with hints on who that might be.

The trial lasted 85 days. None of the witnesses connected the suspects directly to the bomb….The court called the case circumstantial, the evidence incomplete and some witnesses unreliable…Much of the evidence was later challenged….The court’s inference that the bomb had been transferred from the Frankfurt feeder flight was also cast into doubt when a Heathrow security guard revealed that Pan Am’s baggage area had been broken into 17 hours before the bombing, a circumstance never explored….Hans Köchler, a United Nations observer, called the trial “a spectacular miscarriage of justice”…. Many legal experts and investigative journalists challenged the evidence, calling Mr. Megrahi a scapegoat for a Libyan government long identified with terrorism. While denying involvement, Libya paid $2.7 billion to the victims’ families in 2003 in a bid to end years of diplomatic isolation.

But the Times was not finished with the story. It would have more to say, though not pursuing the line developed by the desk-bound McFadden, a 1996 Pulitzer Prize winner. Someone apparently decided that “more reporting” was needed, this time from another Pulitzer Prize winner, the longtime war correspondent John Burns.

His article, headlined “Libyan’s Death Brings Up Debate Over His Release,” focuses in part on the fact that Megrahi was given early release from prison because he suffered from cancer. But it also expanded on McFadden’s theme of doubts about Libya’s involvement. It actually goes a bit further in that direction, raising the theory that Libya was not involved.

Then it suggests that the true sponsor is…Iran.

The Times’s John Burns focuses on one relative and his theory.

In the aftermath of Mr. Megrahi’s death, his defense was taken up anew by the most persistent — and most controversial — of Mr. Megrahi’s defenders in Britain, Dr. Jim Swire, a 75-year-old retired family doctor whose 23-year-old daughter, Flora, died in the bombing. Years before Libya handed Mr. Megrahi and another man, Al-Amin Khalifa Fhimah, over for trial, Dr. Swire voiced strong doubts about the Scottish case, and he fainted in court when Mr. Megrahi was convicted and Mr. Fhimah acquitted.

In the years since, he has been a vociferous advocate of a new independent inquiry into the bombing, saying that there was no reliable evidence that Mr. Megrahi was involved, and much that pointed to Iran, not Libya, as the culprit.

If Swire is so “controversial,” why give his claims such attention?

By citing Swire, Burns, wittingly or not, pulls out one of the oldest tricks in the book. He seems to be himself advancing legitimate inquiry by proposing an alternative theory that is not alternative at all. Indeed, what he does is redirect criticism from a former enemy of the United States establishment to a current one. The “controversial” disclaimer is also an old trick. It insulates the Times from any accusations that it has fallen into its predictable role of advancing the agenda of the American establishment. (Remember The Times’ former star reporter Judith Miller and all those Weapons of Mass Destruction that served as the Bush administration’s justification for the Iraq invasion?)

Even better, Burns cites “broadcast interviews” in which Swire had just repeated his assertions. Thus, it’s not The Times that is responsible for this. It is just “reporting on reporting.” Of course, those who trust the Times for their understanding of the world will not likely focus on any of these implied disclaimers at all. What they will remember is this: it was either Libya….or it was Iran.

Been Here Before, Ladies and Gents

Anyone really interested in figuring out who bombed that plane, and why, cannot ignore history. It is a history of our own government’s playing hardball, sometimes even doing (or at least contemplating) crazy and evil-seeming things in the service of a perceived greater cause. One example of this, and not the only one, is Operation Northwoods, a proposal from the Joint Chiefs of Staff, rejected by an incredulous John F. Kennedy, which would have involved committing acts of terrorism on US soil that could be blamed on Fidel Castro’s government. It was seen as regrettably leading to the loss of innocent life. But the proponents argued that the ends—setting the stage for an American invasion and the removal of Castro—justified the means.

This kind of thing is unpleasant, to put it mildly—almost too awful to contemplate. And discussing it is to invite tremendous hostility from those who don’t know better (and from those who do as well). But raising these uncomfortable truths is called….journalism. History shows us that US and allied intelligence operations will go to almost any lengths to gain the upper hand psychologically, to defame enemies of the state in order to persuade the public to go along with more overt moves, ideally by surrogates. (See Iran 1953, Guatemala 1954, Congo and Dominican Republic 1961, Vietnam 1963, Indonesia and Congo 1965, Cambodia 1970, Chile 1973…may we stop here?).

Meanwhile, governments like Libya under Qaddafi, or Iran under the mullahs, despicable though they are in many respects, have little real incentive to commit such acts against much more powerful countries. They gain nothing and stand to lose everything. Indeed, we can see strong indications that Qaddafi was railroaded over many years (but the effort was put on a bullet train last year) using Lockerbie as well as allegations of mass rape and mass murder, among other issues, as laid out here.  If getting rid of the irksome and fiercely independent Qaddafi was a priority, Iran is much, much more important. The effort to remove the current leadership of Iran and bring it back into the Western political, military and corporate fold is one of the highest priorities of the US, its allies, and their spinmasters. (Read this and this to learn more)

Burns’s Times piece is yet another in a long string of unsupported claims of Iranian nefariousness, which are practically a staple of the Western news diet. But reporters needn’t be complicit. One can accept that the Iranian mullahs and their cohorts are brutal and contemptible without being willing to traffic in falsehoods about them.

If the repositioning from McFadden’s good work that Burns’ piece represented wasn’t enough, we get this, from the Times-owned International Herald Tribune and republished by The Times, headlined “Lockerbie Bomber Dead, Conspiracy Theories Survive.”  The message is, “If you don’t have time to read this, and you probably don’t, just remember: when anyone tries to tell you there’s more to this story, just dismiss them and their notions with the back of your hand.”

Every time we see a journalist use the term “conspiracy theory,” let’s add one of two thought bubbles: Either “I’m lazy” or “I’m worse.” It usually means the reporter is not actually looking into any of the assertions, just taking five minutes to type out references to them, and then subtly undermine the whole train of thought. Because the term “conspiracy theory” immediately telegraphs to readers that they can safely ignore the claims contained therein.

A proper headline, based on the cumulative facts, would be, “Lockerbie Bomber Dead, Big Questions on Bombing Sponsors Unresolved.” (Message to Times and IHT: Happy to help you with headline accuracy—and even headline buzz!)

The Plot Thickens—and Another Person Dies

If you’re still not convinced that dark forces of a particular sort have a deep interest in how this all plays out, consider this development: the mysterious death Sunday of Sukri Ghanem, Libya’s former Oil Minister. Ghanem’s early defection turbocharged the effort to unseat Qaddafi. What’s so interesting, besides his ending up floating in the Danube, is that he had long insisted that Libya had no connection to Lockerbie, nor to the 1984 shooting of a British policeman outside the Libyan embassy in London, four years before Pan Am 103, that was cited as the basis for severing UK-Libyan ties.

Call Ghanem the man who knew too much. And please compare to a fellow defector, the Libyan Justice Minister Mustafa Mohamed Abud Al Jeleil, who, unlike Ghanem, was perfectly happy to stoke the fires against Qaddafi—by announcing, after he had switched sides, that Qaddafi personally ordered the bombing, and promising to produce evidence.

He…..never has. It is now more than a year since the media ran its Jeleil headlines that were so damaging to Qaddafi, and no one, including the Times , has bothered to go back and see if he kept his word. (Background on that can be found  here.)

The Pan Am 103 story could provide crucial linkage to the invasion of Libya and removal of Qaddafi—and lead to a real understanding of why some “accidents” happen, of why some “unavoidable interventions” happen. And no, it’s not always, or even usually, for the stated reasons. Just as the isolation of Libya over Lockerbie was, it seems, not really motivated by justice, the Western support of an externally-planned and -stimulated “indigenous” uprising was not really motivated by a concern for the human rights or the lives of the Libyan people.

This is not to pick on any particular reporter. On some level, all but the very stupidest journalists know how things really work. But they aren’t permitted to tell the rest of us. Thinking of digging deeper when that’s strongly (albeit implicitly) discouraged? There’s a simple choice: your conscience or your job.

To read Megrahi’s claims of innocence, go here.  (If you are in the UK or just want to read the more extensive British reader comments, go here)

WhoWhatWhy plans to continue doing this kind of groundbreaking original reporting. You can count on it. But can we count on you? We cannot do our work without your support.  Please click here to donate; it’s tax deductible. And it packs a punch.