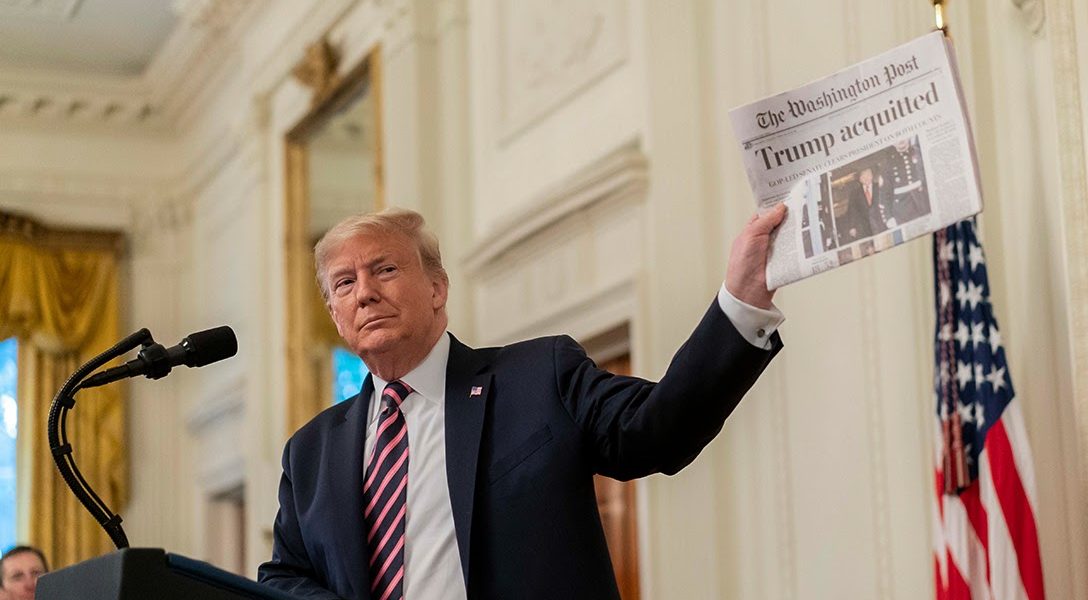 President Donald Trump shows a newspaper headline during his address February 6, 2020 in the East Room of the White House, in response to being acquitted in the US Senate impeachment trial. Photo credit: The White House / Flickr
Government Integrity

One of the most edifying aspects of the recent impeachment process has been the sheer, magnificent variety of Republican approaches to denying reality and avoiding accountability, for themselves and their president. Putting aside the creativity, the bottom line is that not a single Republican made a compelling or coherent case for acquitting the president. There just wasn’t one to be made.

That didn’t stop them from rolling out a range of tactics, from distortion to dissembling.

Sen. James Inhofe (OK) took the traditional (and widely imitated) approach of just making up the facts to fit his predetermination to defend the president no matter what. “The House hasn’t even accused the president of a crime,” Inhofe claimed, adding: “Presidents should be held to the highest standard.”

Inhofe, who voted to convict President Bill Clinton in 1999, dishonestly characterizes the charges against President Donald Trump. The House articles don’t use the words “bribery” or “extortion,” but the evidence supports charging the president with both. Inhofe just ignores the reality of Trump’s other law-breaking.

Sen. Susan Collins (ME) produced the funniest — or most pathetic — explanation for acquitting the president on both counts. She told CBS News she believed the president had learned a “pretty big lesson” from the process:

Later, when reporters asked the president what he thought about Collins’s comment, Trump told them that he’d done nothing wrong. Referring to his July 25 phone call with Ukrainian President Volodymyr Zelensky, in which each president described the same quid pro quo, Trump added, “It was a perfect call.”

With the exception of Mitt Romney (UT), none of the Republican senators demonstrated much intellectual integrity or principled argument during the impeachment sham trial, where party loyalty was pretty much all that mattered. Kentucky Sen. Mitch McConnell, the Senate majority leader, captured the suffocating zeitgeist with exquisite, albeit perhaps unintentional precision. Speaking ahead of the vote, McConnell urged on his fellow Republicans:

“We must vote to reject the House abuse of power, vote to protect our institutions, vote to reject new precedents that would reduce the framers’ design to rubble, vote to keep factional fever from boiling over and scorching our republic.”

This is cynical and manipulative rhetoric, and one assumes McConnell deploys it deliberately, with malice. Referring to “the House abuse of power” is divisive, coded language blaming the Democrats for responding to the president’s illicit actions. Republicans deliberately failed “to protect our institutions” when they supported the presidential stonewall of House inquiries, and when they voted to have a Senate trial without witnesses. The witness-free trial was indeed a new precedent that could help “reduce the framers’ design to rubble.” McConnell and his fellow Republicans have been working toward that end for a long time, precisely by boiling over the factional fever and scorching our republic. McConnell admitted as much when he said:

“Washington Democrats think President Donald Trump committed a high crime or misdemeanor the moment — the moment — he defeated Hillary Clinton in the 2016 election. That is the original sin of this presidency — that he won and they lost.”

That is the language of factional fever in full demagoguery. It is impossible for a person to commit a high crime or misdemeanor before he has been sworn in as president. But McConnell’s dishonesty also harbors grains of truth. There is certainly a large portion of the American public that has never fully viewed Trump as an acceptable president.

There is another grain of truth that McConnell omits: that Trump has allegedly run afoul of the Constitution (emoluments clause) since his first moment in office. Trump continues to use his office to enrich himself (and his cronies, including McConnell’s wife, Elaine Chao, who serves as secretary of transportation) even now.

Factional fever has been with us for quite a while now and it’s hard to think of a time when Republicans weren’t busily keeping it at least on low boil. During the 1990s, the endless investigations of the Clintons eventually produced a partisan impeachment based on constitutional offenses less substantive than those Trump has committed.

A Sense of Decency, at Last

Impeachment: Round One. Kangaroos Win.

McConnell has the chutzpah to ask his colleagues to “vote to keep factional fever from boiling over and scorching our republic.” Well, it’s way too late for that. Our republic has been scorched multiple times over. That is one measure of Republican scorched-earth politics over three decades or more. It’s hard to imagine McConnell seeing this as anything but a pattern of success.

What might keep Republicans awake at night is that this impeachment effort, however flawed, was a sign of Democrats finally waking up to the reality that they need to fight back or get rolled. This time they fought back and still got rolled, in the sense that Trump is still in office. But removing Trump was never going to be a panacea, since all the Trumplings would remain in government, but with a sympathy factor. Having Trump impeached and still in office may be the better outcome among unpleasant choices. And if Democrats can manage to continue to fight in more organized, effective, principled ways, our scorched republic might still survive as an honorable, functioning democratic government.

For now, the present moment is appropriately memorialized by bestowing a Medal of Freedom award on one of the more fevered factionalists of our age, Rush Limbaugh.