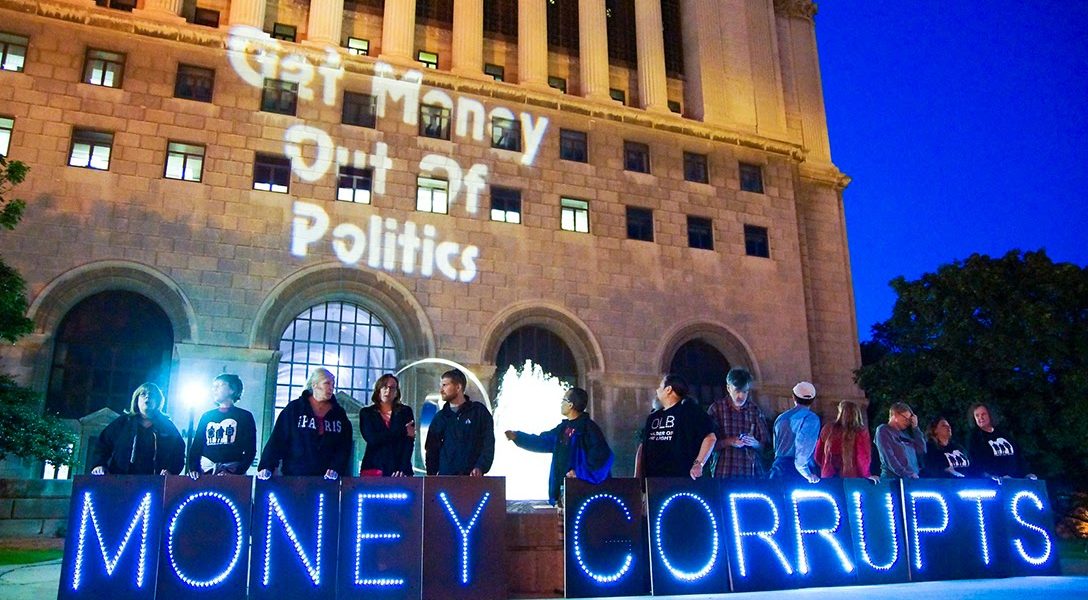 Most Americans agree on background checks for gun purchases, lower prescription drug prices, and the need to take on climate change. But for years, an army of lobbyists and unrestricted outside political spending by corporations have blocked nearly every attempt to make these things happen.

A big reason for this, argues Rep. Steve Cohen (D-TN), is the the Supreme Court’s 2010 Citizens United ruling, which he says has resulted in “the corrosion of our democracy.” The Supreme Court’s ruling notably allowed corporations to create super political action committees (PACs), which are not required to disclose their donors, and spend billions of dollars in US elections.

A growing number of Americans want to get money out of politics. Nearly seven in 10 Americans support a constitutional amendment that overturns Citizens United, according to a 2018 study by the University of Maryland School of Public Policy’s Program for Public Consultation. Now that almost 20 states and more than 800 local governments have called for a constitutional amendment that places reasonable limits on corporate campaign contributions, some members of Congress appear to be listening.

Democratic lawmakers on the House Judiciary Committee’s Subcommittee on the Constitution, Civil Rights, and Civil Liberties made the case during a hearing Thursday that Citizens United must be overturned, while the panel’s Republicans praised the ruling as a way for Americans to pool their resources and have a greater voice.

Rep. Jamie Raskin (D-MD) argued that Citizens United did not strengthen anyone’s right to free speech. Instead, Raskin contended, the ruling worked to transform “every corporate treasury in America into a potential political slush fund, and thereby authorize and empower the CEOs of corporations to spend whatever they wanted of other people’s money … in political campaigns.” In fact, corporate spending has come under greater scrutiny since the 2016 election because some of the largest corporations in the United States are partially owned by noncitizen foreign nationals.

Perhaps unintentionally, the issue of big-dollar donors resulted in the referencing of Democratic presidential candidate and former mayor of New York City Michael Bloomberg. When asked to name 10 of the 25 biggest spenders in US elections, Robert Weissman, president of the watchdog group Public Citizen, said he could name the top two: Republican mega-donor Sheldon Adelson, and Bloomberg.

Ellen Weintraub, a commissioner on the Federal Election Commission (FEC), offered the committee a number of steps that Congress could immediately take to stop the bombardment of cash in US elections. These include extending the ban on foreign-national contributions to ballot measures and reforming the financing of inaugural committees. HR 1, known as the For the People Act, has been waiting for a vote in the Senate for one year. That bill imposes stronger disclosure requirements about donors from super PACs, and establishes publicly funded campaigns.

Coordination between political campaigns and outside organizations has long been a concern for campaign finance reform advocates, but Citizens United allowed the issue to escalate to new heights. The rules banning such coordination “have been rendered meaningless by a broken [FEC] that has not punished anyone for coordinating since the Citizens United decision,” according to a recent report by the political reform group Issue One.

Another idea long-championed by Weintraub is strengthening disclosure requirements for online political advertisements to highlight how the democratic process can be subverted. Notable examples include Russia’s intelligence agency’s purchase of Facebook advertisements during the 2016 presidential election with rubles — its own currency. Since then, Facebook has tried to make amends for the misinformation that campaign finance reform experts blame it for propagating. The social media giant has created an ad “library” so users can see who bought advertisements and the demographics targeted. The problem, however, is that the database is confusing and gives researchers more headaches than answers when trying to navigate it.

In her opening statement, Weintraub also took the opportunity to remind Congress that the federal election watchdog agency remains toothless. Because the Senate has failed to confirm a fourth commissioner, the FEC is without a quorum, rendering it unable to issue advisory opinions, vote on enforcement measures, or hold a meeting since September 2019. More than 300 cases are still pending at the FEC, and Weintraub argued that “the clock is ticking on a number of cases.”

“And, while I know this is not within the House’s purview, the FEC could really use some new commissioners to restore our quorum and let us do our jobs,” Weintraub said. “So, tell your friends.”