International Holocaust Remembrance Day — Why You Should Remember.

The United Nations General Assembly has designated January 27 International Holocaust Remembrance Day. On that day in 1945, Russia’s Red Army broke into Auschwitz, the notorious concentration camp in Nazi-occupied Poland. They encountered 648 corpses inside and over 7,000 starving survivors who were barely alive.

What they saw was incomprehensible horror that cannot be captured in words, but here are two videos that will give you an idea:

For tragic reasons, some people have remembered the Holocaust every day of what is left of their lives. But many others know little or nothing about that unfathomably horrific event. To remedy that unfortunate ignorance, here are a few facts about the final stages of the Holocaust.

Between 1941 and 1945, Nazi Germany and its collaborators exterminated six million Jews — two-thirds of Europe’s entire Jewish population — including men, women, children, and infants, the “final solution” that would purify the country of “inferior” races. They also murdered five million “undesirable” non-Jews — the disabled, homosexuals, Roma and Sinti, Slavs, political dissenters, and criminals. Those who were not worked to death died in mass shootings, inside gas chambers and gas vans, by beatings, by being ripped apart by dogs, and in sadistic medical experiments. 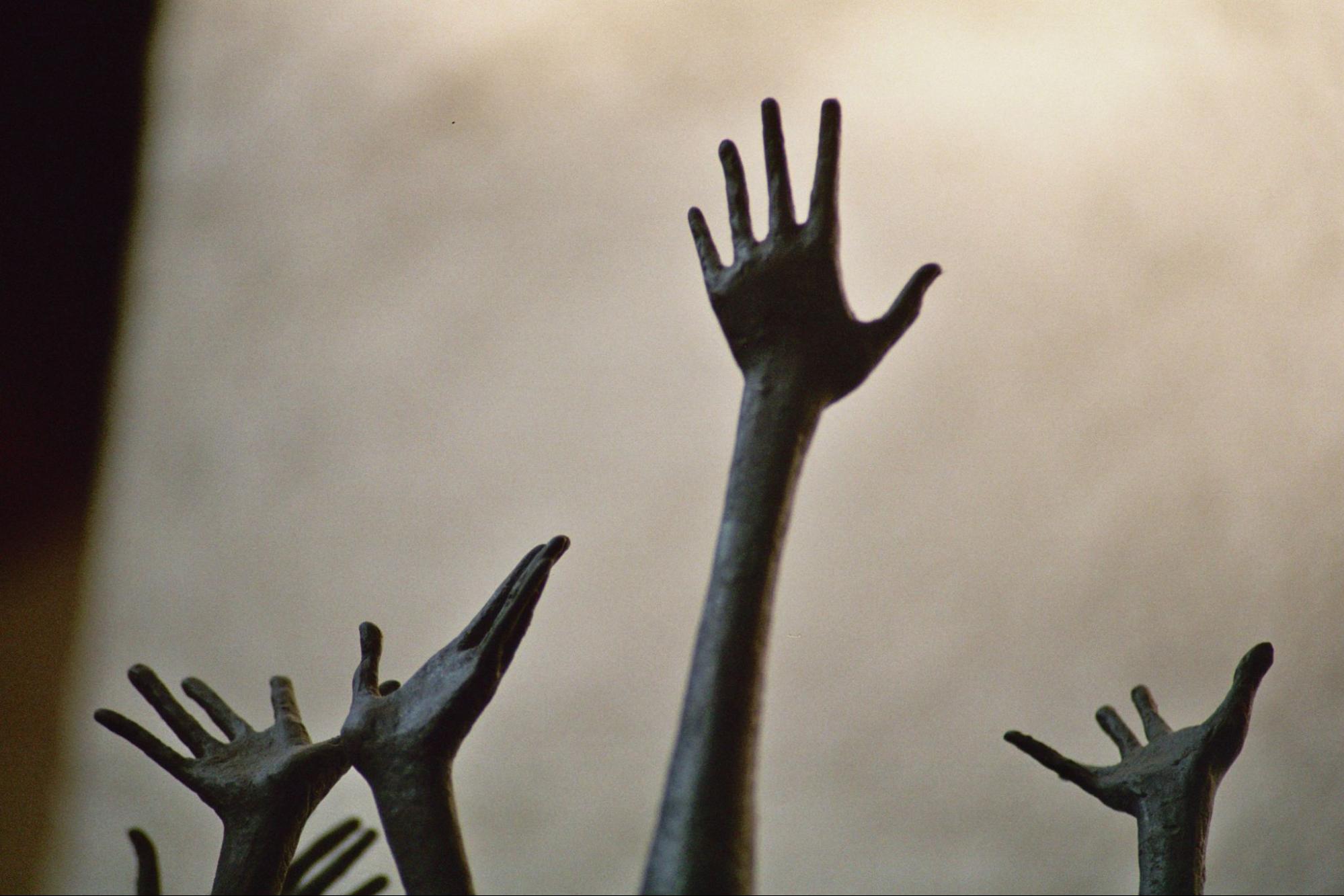 To understand how this could possibly happen, you can read various scholarly works on the period. But you can learn a lot about the fascism that led to the Holocaust by taking a look at what’s happening today.

In early August 2017, a violent gang of armed white supremicists chanting anti-semitic phrases marched on Charlottesville, VA, ostensibly to protest the removal of a statue of Confederate Gen. Robert E. Lee. They were met with counterprotesters — and one gang member in a car deliberately took aim at the counterprotesters in the street, injuring 19, and killing a 32-year-old woman. Go here to see the BBC’s photo essay “Charlottesville: Most Powerful Pictures of Protest and Violence.”

Two years later, in a campaign speech, Joe Biden said, “With those words, the president of the United States assigned a moral equivalence between those spreading hate and those with the courage to stand against it. And in that moment, I knew the threat to this nation was unlike any I’d ever seen in my lifetime.” 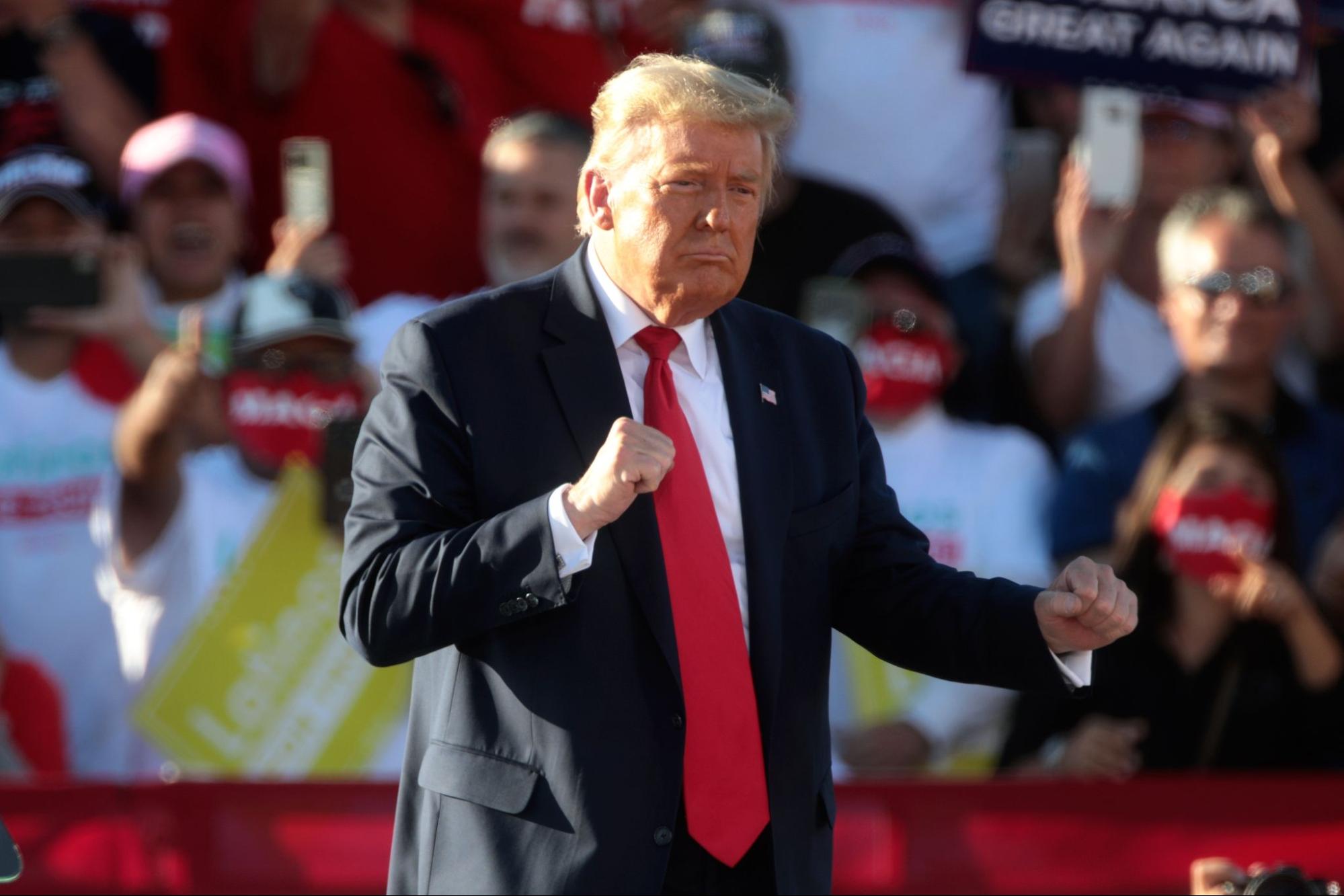 How to describe this grotesquerie, Donald J. Trump? He is as inflated as the balloon created in his image, but he is the Great White Hope for millions of people. He clearly relates to white supremacists, and anti-Semites. From time to time he reads the speeches of Hitler. He once said, falsely, that his father was born in Germany. He rants against the Jews, even though he has Jewish in-laws and advisers. He encourages violence against liberals. He incited the attempted coup on January 6, 2021.

He appointed white supremacist Stephen Miller to keep out as many brown people as possible. Miller, as Trump’s former senior policy adviser, is the man behind the forced family separation policy for migrants, the man responsible for the kids in cages. Emails released by the Southern Poverty Law Center revealed that Miller was profoundly influenced by President Calvin Coolidge, signer of the Immigration Act of 1924. This was legislation based on eugenics, something Hitler believed in. Coolidge said, “Biological laws tell us that certain divergent people will not mix or blend. … Quality of mind and body suggests that observance of ethnic law is as great a necessity to a nation as immigration law.” 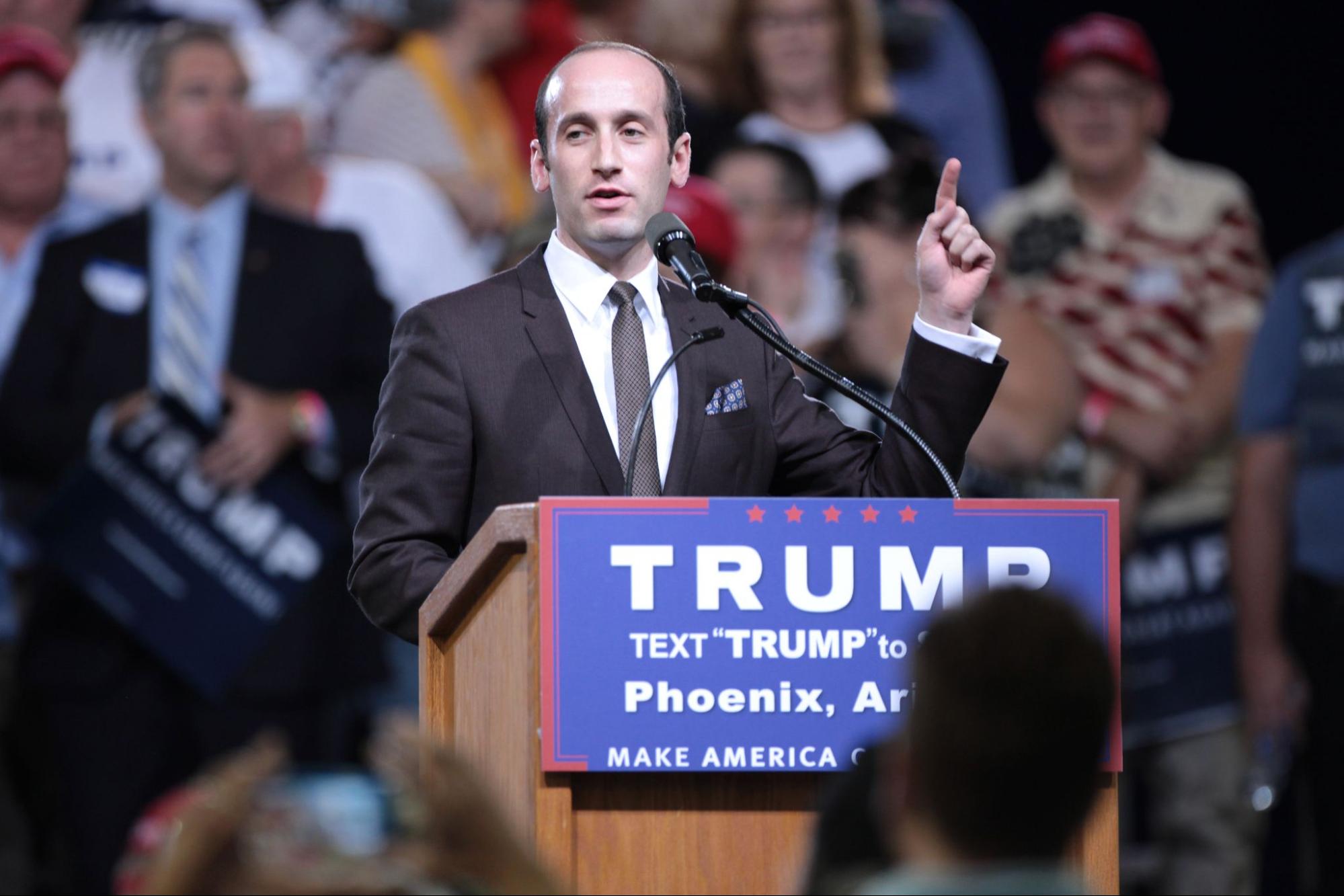 The Anti-Defamation League (ADL) has noticed an alarming pattern: “An expanding mainstream acceptance of extreme beliefs and ideologies” resulting in over 100 candidates for the 2022 midterm elections with extremist views — some with direct connections to the Proud Boys, the Oath Keepers, and other groups of white supremacists — according to the ADL’s Center on Extremism, which is tracking them.

Here’s a recent incident that’s possibly related to the “mainstream acceptance of extreme beliefs”: When 21-year-old Christina Darling walked up to an 8-year-old boy and his younger siblings playing in front of a synagogue, she seemed to have no fear of speaking her mind:

“Hitler should have killed you all. I’ll kill you and know where you live.”

The 8-year-old’s father, Aryah Fried, told CBS New York that after Darling made those comments, his son told her he would save his little sister. “I gotta teach him not to engage, but he engaged,” Fried said.

“And she came running back at him, spat in his face and told him, ‘We will kill you all, I know where you live, and we’ll make sure to get you all next time.’”

There have recently been thousands of anti-Semitic attacks in the US, some involving violence (for details, go here, here, and here), but this one — an adult spitting at and threatening small children with murder — is somehow especially cringeworthy. She has been charged with a hate crime. What on earth did she think would happen to her after doing such things?

There are people who are so lacking in imagination and intellect that, in order to add heft to a weak or invalid idea, they make it analogous to the Holocaust, or its perpetrators. Here are a few obscene samples.

Ann Coulter: Back in 2002, in her book Slander: Liberal Lies About the American Right, she refers to Katie Couric as “the affable Eva Braun [Adolf Hitler’s mistress] of morning television.” And, on Fox News, Coutler compared her to notorious Nazi propagandist Joseph Goebbels. Couric’s crime was to blame various ugly acts in America on right-wing Christian zealots.

Rep. Marjorie Taylor Greene (R-GA): She complained about Speaker of the House Nancy Pelosi’s requirement of House members to wear masks, “You know, we can look back at a time in history where people were told to wear a gold star, and they were definitely treated like second class citizens, so much so that they were put in trains and taken to gas chambers in Nazi Germany. And this is exactly the type of abuse that Nancy Pelosi is talking about.”

Robert F. Kennedy Jr.: Addressing a crowd opposed to vaccine mandates, he declared that such mandates are more totalitarian than Hitler’s Holocaust, saying, “Even in Hitler Germany [sic], you could cross the Alps into Switzerland. You could hide in an attic, like Anne Frank did.” 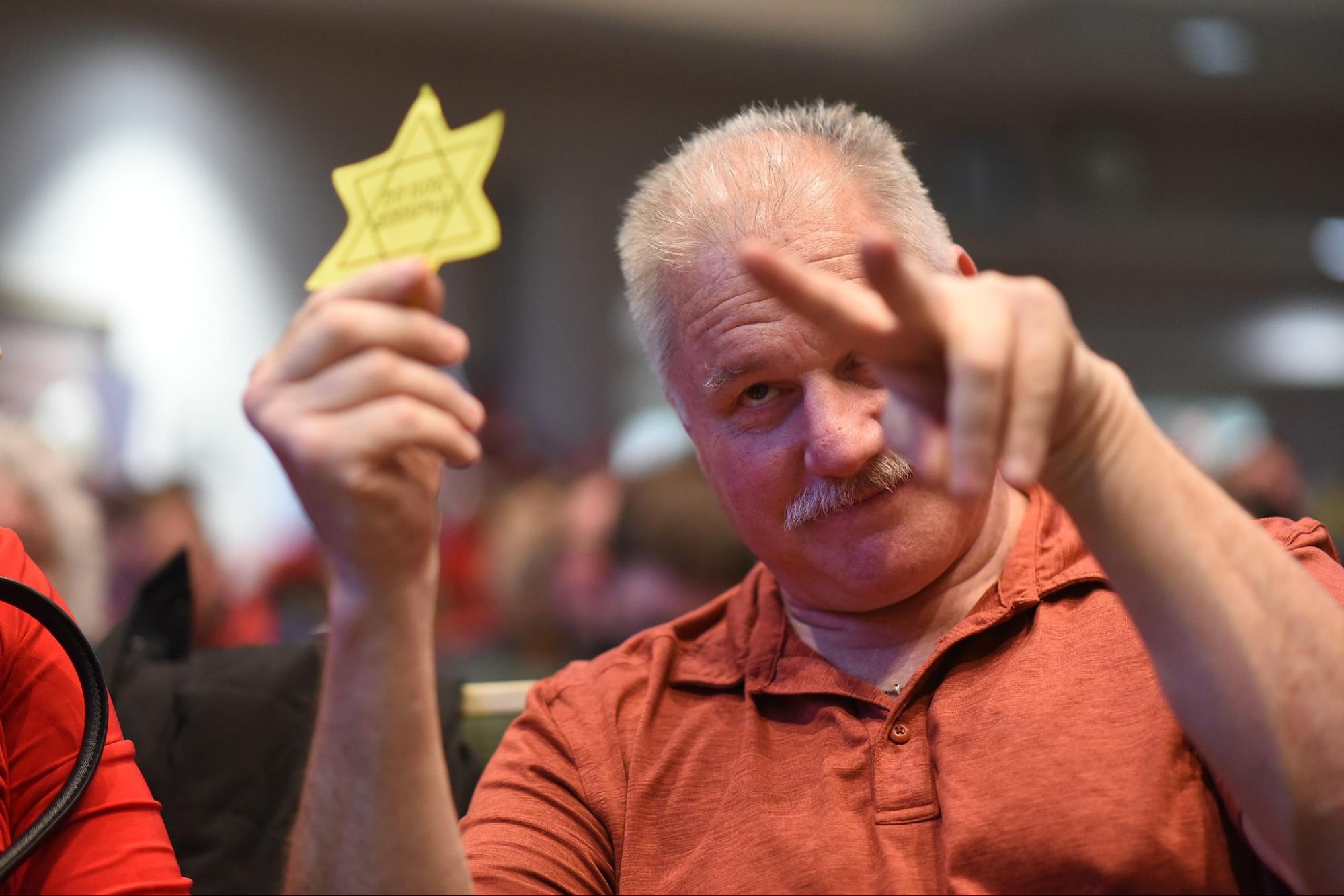 This is a dangerous practice. The Holocaust was horrific beyond words, but this frequent mindless weaponization of the event anesthetizes its shock value — and shock does have value: On normal human beings, it can act as a deterrent.

But, as a writer for The Jerusalem Post observed, “Antisemitism has shown amazing resilience; like coronavirus, its ability to mutate and develop new variants is simply remarkable; successfully infecting different populations, thriving in new environments, affixing itself to a range of conflicting ideologies.”

All kinds of very strange people, for sinister reasons, seem determined to create a memory hole in the history of the world: They say the Holocaust never happened. Some of these people have advanced degrees and, to the naive, they can appear credible. As I wrote in an earlier article:

At a time when the American public seems to be more ignorant and uninformed than ever, the tools of deception have become more sophisticated.

We live in an age of scams that trick the senses. Photos can be altered, films and videos can be manipulated to an exquisite degree of realism. …

Those who are savvy about these fancy tools are actually ignorant in their own way — because they often don’t know the truth when they see it. Young Holocaust skeptics are an example. …

Earlier generations grew up learning about these horrors from people they trusted. Soldiers returning from the war. A grim-faced president and his generals. A media they believed in, like their local newspapers; Life magazine; the gritty black-and-white documentaries shown on TV and in movie theaters; a somber-faced Edward R. Murrow, cigarette in hand, looking deeply into the camera, surrounded by smoke that somehow seemed related to what he was reporting.

Imagine living in a world where you can trust the news without even thinking about it.

Are We One ‘Trigger Event’ Away From the Next Holocaust?

Truth? WTF Is That?