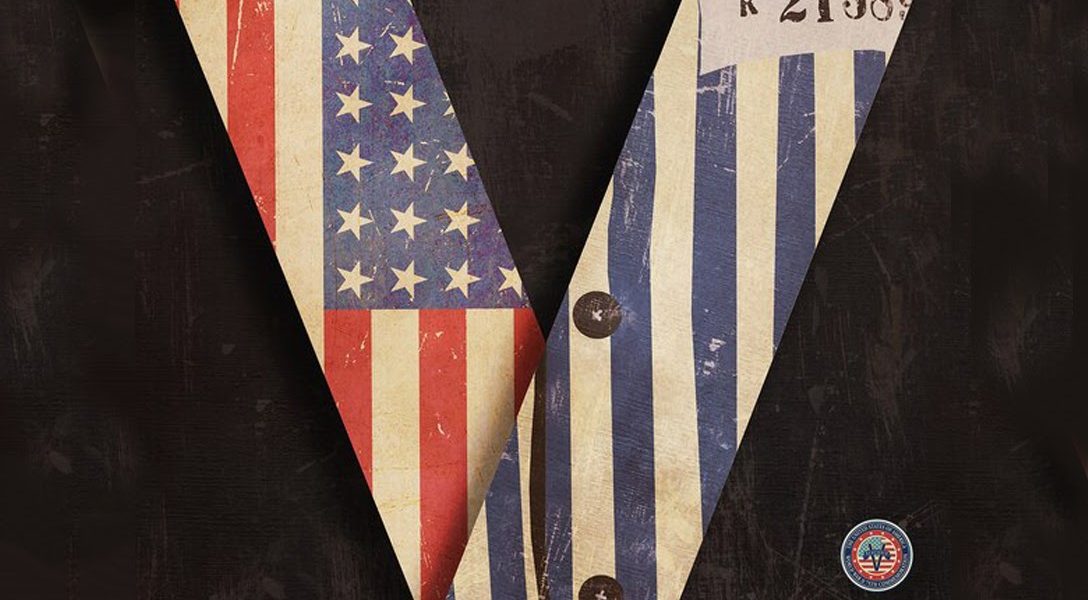 The Days of Remembrance poster designed by the Defense Equal Opportunity Management Institute reflects on the somber remembrance of the atrocities of World War II. Photo credit: DoD
Art

When US soldiers arrived at the Dachau gate on April 29, 1945, they were not prepared for what they were about to see inside.

“There were bodies on top of bodies, waist-deep, stacked like cordwood,” writes New York Times best-selling author Alex Kershaw in The Liberator, a World War II biography of Colonel Felix Sparks. “Several of the dead had open eyes. Their last moments of agony were etched on their faces.”

Located approximately 10 miles northwest from Munich, Dachau was the first concentration camp set up by the Nazis in 1933. Over 200,000 prisoners passed through the camp in just 12 years. And at least 30,000 died inside Dachau and its subcamps.

Sparks’s men, unprepared for the gruesome sight of 2,300 corpses piled up in the boxcars of a train, could not contain their emotions.

“Some began to cry. Others cussed. Most were dumbstruck. They couldn’t believe what they were seeing. It was unreal. Maggots. The smell. Naked people stacked in heaps,” Kershaw describes.

This traumatic moment soon escalated into violence. At the sound of gunfire, Sparks found himself in the middle of a coal yard, shooting his .45 pistol into the air, to stop his men from massacring SS guards in the camp.

Kershaw writes that at least 17 guards were killed, as many as 75 were on the ground, and many were wounded. Bearing Witness to What Happened in Dachau

Dan Dougherty, then a Staff Sergeant in C Company, told WhoWhatWhy that he remembers April 29 starting off as an easy day.

They had spent the night in the woods. And when they assembled to get their rations, their company commander asked them to gather around for special orders.

“I remember him saying that the division is in the vicinity of a concentration camp. And it was very important that all possible witnesses be kept alive. That’s all we were told,” Dougherty said in an interview with WhoWhatWhy.

But later that afternoon a company runner delivered a message instructing C Company to relieve I Company because soldiers at Dachau had “gone berserk.”

So Dougherty hiked with his company for one hour until they arrived at the camp around 3:30-4:00 p.m.

“The only preparation we had approaching the concentration camp was from our platoon leader who said ‘Guys, be careful about lice.’ But nobody mentioned corpses. God, there were more corpses than there were lice. That just knocked everybody out,” he said.

Dougherty also was unprepared for the sight of the dead SS guards.

“It wasn’t very long before my group came to the coal yard. And my God, this was another incredible experience because here are about 15 civilian reporters milling around the corpses of slain guards with nobody to explain to us what has happened,” he said. “We just assumed that this was I Company’s handiwork, and it turns out that’s what it was.”

“Here you have a family living supposedly a normal life and outside you have just total depravity. We couldn’t get over the fact that we were in this very nice apartment, and outside there was thousands of corpses.”

“One of my guys, a corporal, crawled over the corpses of the SS guards, whipped out his knife and cut off his finger because he wanted the guy’s SS ring for a souvenir,” Dougherty said. “In the investigation that happened about the killing of the guards at Dachau, there’s reference to the fact that in the coal yard there were 17 corpses, and two of them had fingers missing.”

Dougherty still remembers other lingering memories from the camp.

“That night, my platoon occupied a single family home that had obviously been occupied by a senior SS officer. It had lovely flower gardens out front, upholstered furniture, and framed pictures on the wall,” he said. “Here you have a family living supposedly a normal life and outside you have just total depravity. We couldn’t get over the fact that we were in this very nice apartment, and outside there was thousands of corpses.”

Kershaw writes that while the camp occupied approximately 5 acres, the SS barracks and complex were four times bigger.

Now, 75 years later, Dougherty is still trying to understand how one of the most advanced civilizations of his time could commit some of the greatest atrocities against humanity.

Can We Live Up to the Legacy of World War II?

Experts today see the Nuremberg Trials at the end of World War II as a crucial step for international law.

“The important thing about Nuremberg is the attempt to use principles of right and wrong in a universal way,” said Terry Lynn Karl, professor emeritus at Stanford University and expert witness in human rights and war crimes trials. “In other words, Nuremberg picked up the idea that it did not matter where a crime happens because it de-linked crimes from a particular geographic location.”

World War II became a ruthless stage for savage persecutions and mass killings. But after the Nazis were defeated, the Allies came together to set a minimum standard of rights for all human beings. And Karl says that this standard ultimately opened a path by which countries today can prosecute crimes against humanity, regardless of nationality and where the crime is committed.

But while Nuremberg established these principles of law, it did not set them into practice. So even after World War II, the pledge for “Never again!” rang hollow in the ears of millions of people who continued to die in atrocities around the world.

Karl points out that the United States today does not recognize crimes against humanity as a legal principle in criminal law, even though it was the country most responsible for introducing it in the Nuremberg trials.

“75 years later, US top officials are protected even if the US government supports the criminal trials of people like Saddam Hussein,” she said. “Crimes that shock the conscience of the world should be applied everywhere, even to our own leaders.”

Karl says that whether America can live up to its World War II legacy will largely depend on the country’s ability to align its ideals with its practices.

“The notion that all human beings are created equal, which was embedded in the Nuremberg trials and the Nuremberg law, is also part of our heritage but not the practice of our country,” she said.

Telling the Story of a World War II Hero

Alexander Kershaw wanted to write a book about the soldiers who liberated the concentration camps during World War II. So when he saw a photo of Colonel Felix Sparks firing a pistol in the air while standing in the middle of a coal yard at the Dachau concentration camp, he knew he had found a compelling story.

“He was firing his pistol in the air to basically stop his men from massacring the SS,” said Kershaw. “And it shows great moral integrity as an officer, that everything that he had been through, to still act with honor and decency.”

The picture was taken on April 29, 1945, when Sparks was only 26 years old. He was then the commanding officer of the first American unit that had entered Dachau. And as a liberator, Kershaw says, it was a powerful moment because it ended the longest standing concentration camp in the Third Reich.

Kershaw’s book has now been adapted into a four-part live action animated series, which premieres on Netflix on Veteran’s Day. It focuses on the 157th Infantry Regiment, commanded by Sparks.

“The first day that the Allies began to liberate Europe was the 10th of July 1943 with the invasion of Sicily,” he said. “And Sparks went from the very beginning of the liberation of Europe to the very end.”

By following Sparks from his boyhood in the deserts of Arizona to the battlefields of Salerno and the coal yard at Dachau, Kershaw not only maps out the 500-day combat odyssey of his unit but also tells a broader story about the liberation of Europe.

“In a way, the story of the 157th Infantry Regiment, at the beginning, is the story of the American West going back to liberate the Old World from the Nazis,” the author said. “So you have Native Americans, cowboys, and Mexican Americans all wearing the thunderbird patch on their shoulders and fighting Nazis.”