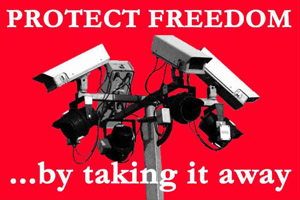 Why Obama Cannot Undo the Surveillance Society—But We Can President Obama, taking a smart political tack in the uproar following several explosive disclosures on NSA domestic spying practices, said he was all in favor of a vigorous public debate—that it would be a “healthy” thing. But calling for a public debate is one thing; actually doing anything to facilitate a truly open discussion, much less acting on what such a discussion might reveal, is quite another.

Today, the New York Times, in a news/analysis article, essentially declared that there was no hope for any kind of restraint of growing government spying on the public. Not if it is up to the people’s representatives.

The Times noted that secrecy rules will prevent robust and open discussion in Congress. It also pointed out that Republicans will mostly stay in line with their traditional allies in the intelligence services—and that Democrats will too, both because they will want to show they did the right thing in voting to authorize the Patriot Act and other relevant legislation, and because during this round, the leader is Obama, a Democrat.

But that’s just the beginning of the difficulties in the way of achieving reform of our incipient surveillance state. The Times goes on to say:

Nor is it clear that political pressure from either Congress or the public will be sufficient to prompt the administration to open the door wider on government surveillance.

When even an establishment-serving entity like the New York Times virtually concedes that there’s no hope for reform even when the vast majority might want it, this is a signal that something is deeply amiss in this society.

Of course, there is more to the story.

What the Times and other media will not and perhaps cannot say, is this: not only is Congress impotent in these matters, but it wouldn’t even matter if the president himself chose to act. Here’s why.

As history shows us, when it comes to the overall direction of American governance, absent generally minor tweaks of foreign policy and somewhat more robust swings on certain domestic issues that rouse voting bases (notably things like gay and reproductive rights and, lately, immigration) presidents of both parties rarely deviate from a kind of “consensus” cobbled together by people in academia, media and government, a consensus that almost always serves the interests of a fairly small number of wealthy people and interests. (If you’ve never heard this notion, a visit to one of our remaining public libraries might be in order.)

This is not a partisan issue. It doesn’t matter who is president. No “ordinary American who can dream of one day becoming president” is in a position to alter the basic equation, which would involve bucking the vast military-financial-industrial-academic complex that drives the American economy, funds our political elections and keeps people in line through any means necessary. That’s as true of Obama as it was of Kennedy or Nixon or…fill in the blank. For more on this, see our 2010 piece “What Obama is Up Against.”

“A Bullet For Your Thoughts?”

President Obama, who presumably believed in and hoped to achieve some of the promises he made as a candidate, has no choice but to try and keep people complacent, for he is essentially helpless. This is in part because of the power-brokers to whom he owes his political success—figures from the liberal end of the same status-quo-benefiting money spectrum—bankers, investors, corporate attorneys—who always run things. He has almost no wiggle room.

As we previously reported (see this and this), his efforts to assert himself have not gone well. Notably, when he tried to reduce troops substantially in Afghanistan, a campaign of leaks from high-placed military sources, accommodated by their friends in the media, immediately neutered him. Once it became clear that virtually no one would actually tell the public what had happened in this instance (or bring to the spotlight the tremendous financial stakes in Afghanistan for corporate interests), Obama must have understood what history has in store for him: the legacy of a Carter or a Clinton or perhaps a Ford, followed by the rewards heaped upon a Bill Clinton in the long years remaining in his life.

Steven Aftergood of the Project on Government Secrecy told the Times, “If President Obama really welcomed a debate, there are all kinds of things he could do in terms of declassification and disclosure to foster it. But he’s not doing any of them.”

And indeed, he could do them in principle, but he cannot do them in reality. One of the many things he supposedly could do, but inexplicably has failed to do, is to declassify the remaining files on the JFK assassination.

If he were to release records on the national security apparatus during this, the fiftieth anniversary of the assassination of another president, what a powerful statement that would be. And it would perhaps open doors to greater understanding of exactly how and when a military-intelligence clique answering to moneyed interests seized de facto power in this country.

From his first moments in office, as we have reported in the past, Obama has been sent plenty of unsubtle messages himself about the need to tread carefully. (See this and this.)

Once you read those, please think about why the establishment invests so much effort in persuading us that anyone who dares speculate on these matters, or inquire, is a nut to be shunned, ridiculed, penalized.

The preferred and most comfortable roles of the media, Hollywood, publishing, and academia are to get us to focus on individuals and personalities, and to exaggerate their significance—not to focus us on recurring patterns that render those individuals largely irrelevant.

Guess Who “Has the Power”? Surprise!

We all like to believe we are free, and that we determine the direction of this country, but it has seldom been true in the past and it is even less true now.

Many of us find this too upsetting to contemplate, or, given the comforts that financial security affords, confuse economic with political freedom. Either way, blinders are the preferred apparel.

And yet there is real reason to wake up, and pay attention.

The truth is that the “powerful” individuals in whom we invest our hope have little power. But, paradoxically, the individuals who actually have power—or rather could have power—are….ourselves.

Most of us feel better believing we cannot do anything, because then we do not have to do anything. But if each of us did something, even a little, and got a few others to do something, before you knew it, we might actually have democracy.

I remember covering the fall of communism in East Germany. I personally witnessed individuals take action to make sure that the window of opportunity got wider—holding covert meetings, getting onto buses with ski masks to hand out leaflets, signaling resistance to the authorities in small ways so that the establishment workers would themselves begin letting go of the status quo.