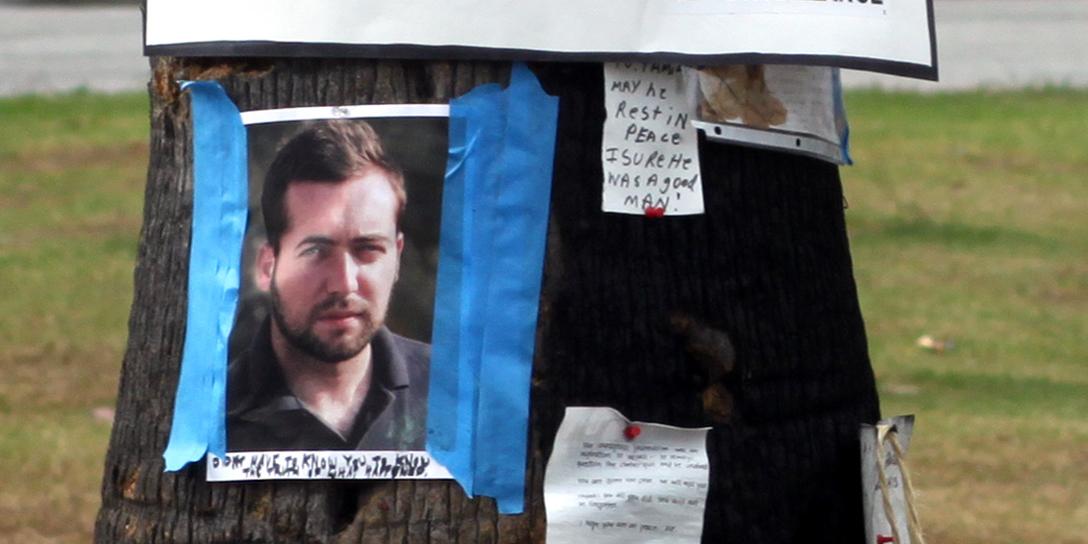 Investigative journalist Michael Hastings died in a mysterious car accident two years ago this month. Will we ever know the truth about his death? Photo credit: Lord Jim / Flickr
Journalism & Media

Hastings’ Lessons From the Grave—Have We Learned Anything?

Two years ago this month, the young and ambitious investigative journalist Michael Hastings died in a mysterious, fiery car crash. Investigators and journalists have uncovered some startling revelations regarding the accident in the past two years, though the full truth of what really happened to Hastings could have been buried with him.

Hastings was known for challenging conventional wisdom and investigating authority at the highest levels. With a Polk Award-winning article in Rolling Stone, he brought down General Stanley McChrystal, commander of NATO’s International Security Assistance Force and US Forces-Afghanistan.

At the time of his death, Hastings had been working on a story about CIA Director John Brennan. The president of Strategic Forecasting Inc. (“Stratfor”), a CIA contract global intelligence firm, has described Brennan in secret emails as someone on a “witch hunt” of investigative journalists. Brennan, of course, has denied these claims: a CIA spokesperson told reporter Kimberly Dvorak in an email that notwithstanding WikiLeaks, “any suggestion that Director Brennan has ever attempted to infringe on constitutionally-protected press freedoms is offensive and baseless.”

Is it possible that Brennan felt threatened by the content of Hastings’ would-be story? If yes, how would the CIA have responded to such an expose ?

At the time of Hastings’ death, counterterrorism expert Richard Clarke told The Huffington Post that it was possible that Hastings’ car had been hacked; that the known details of the crash were consistent with a car cyber attack.

“There is reason to believe that intelligence agencies for major powers”—including the United States—know how to remotely seize control of a car, Clarke said.

At the time, however, Clarke’s suggestion received little attention from the mainstream media. In the past two years, the issue of automobile cybersecurity has entered the mainstream arena.

Since 2013, scientists have proven the possibility of hacking a car, and lawmakers are revealing the lack of cybersecurity against these types of threats built into today’s digital cars.

“Your car may have as many as 30 separate electronic control units, some of them built for wireless access. Hackers have shown that they can disconnect brakes, kill acceleration and more—although most hacks currently require direct, wired access to the car’s systems. Even so, a lab technician turned off our test car while we were driving it—from a cell phone,” Chris Meyer, Vice President of Consumer Reports, said in an email to WhoWhatWhy.

Video demos pre-recorded for the conference showed Miller and Valasek able to jerk the steering wheel, disable the car’s brakes, accelerate, manipulate the seat belt, turn off the engine, mess with both interior and exterior lights, honk the horn, and program the console to read that the car had a full tank of gas when it didn’t, according to CNET.

After this successful demonstration of a computer-generated car hack, lawmakers sent inquiries to car manufacturers about the cybersecurity of their automobiles. The results do not provide much of a sense of security—or cybersecurity—to drivers on the road today.

Here are the four trends found in the report:

• Nearly 100 percent of vehicles on the market include wireless technologies that could pose vulnerabilities to hacking or privacy intrusions.

• Most automobile manufacturers were unaware of or unable to report on past hacking incidents.

• Security measures to prevent remote access to vehicle electronics are inconsistent and haphazard across the different manufacturers.

The information on the very real possibility of carhacking raises the question: was Michael Hastings’ car hacked? Is it possible that someone was trying to shut him up? “This was not an accident.” In the immediate days leading up to his death, Hastings was sure that his car had been tampered with and was scared for his life. Photo credit: Lord Jim / Flickr

Hastings’ friends and family time and time again described him as “fearless.” In the week leading up to June 18, 2013, however, Hastings was panicked, and openly expressed concerns to his friends and colleagues that his Mercedes had been tampered with.

Hastings showed up at a neighbor’s apartment just 24 hours before his death and “urgently asked to borrow her Volvo,” saying that he was afraid to drive his own car but that he wanted to leave town, Hastings’ friend and neighbor Jordanna Thigpen told LA Weekly.

Sixteen hours before his death, Hastings alerted friends and colleagues, including WikiLeaks lawyer Jennifer Robinson, that the FBI was investigating him.

“The Feds are interviewing my ‘close friends and associates,’” Hastings wrote to colleagues at Buzzfeed, at 12:56pm on June 17.

“Perhaps if the authorities arrive ‘BuzzFeed GQ’, er HQ, may be wise to immediately request legal counsel before any conversations or interviews about our news-gathering practices or related journalism issues. Also: I’m onto a big story, and need to go off the radar for a bit,” he wrote. He signed the email that he “hoped to see you all soon.”

“As soon as I got [that email] I was nervous my whole body was shaking, I had goosebumps,” friend Joe Biggs told WhoWhatWhy.

And then, at 4:20am on June 18, on Highland Avenue in Los Angeles, Hastings’ silver Mercedes C250 exploded and hit a palm tree. There were no apparent attempts to brake before the collision.

“The whole surrounding circumstances still eat away at me all the time,” Biggs told WhoWhatWhy. “A car doesn’t just have a flash underneath before it crashes. The neighbors said that they heard an explosion—a loud explosion—then the car hit the tree. If a car hits a tree, it will pin the engine going into the trunk of the tree into the base or frame of the car. Instead, the engine was ejected, at the path of travel, heading down the road,” he said.

“I’ve never seen an explosion like that,” Terry Hopkins, a former US Navy military policeman who served in Afghanistan, told WhoWhatWhy two years ago. “I’ve seen military vehicles explode, but never quite like that. Look, here’s a reporter who brought down a general. He’s sending out emails saying he’s being watched. It’s four in the morning and his car explodes? Come on, you have to be naive not to at least consider it wasn’t an accident.”

In the days immediately following his death, the FBI promptly responded to inquiries from the press about whether or not Hastings had been under investigation—a rare instance of punctuality and seeming transparency from the agency.

“At no time was journalist Michael Hastings under investigation by the FBI,” said agency public affairs specialist Laura Eimiller.

This is clearly inconsistent with what Hastings himself thought and wrote about in the email to his friends and colleagues. VICE News investigative reporter Jason Leopold and MIT Doctoral Candidate Ryan Shapiro also thought the FBI’s official position was questionable. In 2013, Leopold and Shapiro spearheaded a Freedom of Information Act (FOIA) lawsuit to open documents that could reveal whether or not Hastings was under investigation by the FBI.

The lawsuit revealed that the FBI had misled the public: Michael Hastings was on the FBI’s radar—if not under complete investigation—for “controversial reporting.”

Investigating reporting threatens investigative reporting, Leopold believes. The revelation that law enforcement agencies will investigate journalists’ reporting has a “chilling effect on newsgathering and on the ability for journalists and sources to speak” Leopold said.

Leopold said he thinks that’s why even two years after Michael’s death there are still government officials investigating journalists. “Unfortunately,” Leopold said, “it’s really unclear what these government agencies are doing behind the scenes… That’s kind of scary.”

“I believe Michael Hastings died in a car crash, I want to make that clear, I have absolutely no thoughts about if there was anything suspicious.” Leopold said. “I’m well aware that people try to make the connection ‘oh he’s investigating Brennan and then he died,’ I’m not on that page.”

Officials from the LAPD have also publicly stated that there had been no indication of foul play in their investigation of the crash, but, requesting anonymity, a family member of Hastings previously expressed dissatisfaction with the LAPD’s investigation to WhoWhatWhy.

“The LAPD has done a really sloppy job investigating his case, and they were hoping for a mother lode of drugs in his system. When they didn’t get it in the toxicology lab results (science!), they had to insert speculation throughout their field report to compensate for their lack of an investigation. It’s so irresponsible,” the family member wrote in an email.

Investigators did consider the possibility of suicide, according to the Los Angeles County Coroner’s Department report, although Hastings was not known to have had any past suicide attempts or ideations, the report said. In response to the suggestion of suicide as the cause of death, friends of Hastings told WhoWhatWhy that they highly doubt it.

“No, he had a good family, he loved everybody in his family. I don’t think he would allow himself to do something like that because he knew that would affect so many people,” Biggs told WhoWhatWhy.

“The world lost a great reporter, he was a fearless journalist who had bigger balls than most people could ever imagine,” Biggs said. “I think the whole case should be revisited honestly.”