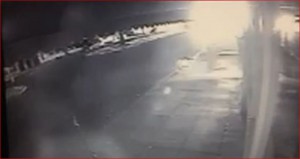 Two weeks ago, WhoWhatWhy wrote about the mysterious high-speed, single-car crash that ended the life of journalist Michael Hastings. Here’s that surveillance camera video we mentioned, from the pizza place adjacent to the crash site.

98 responses to “The Crash Video”