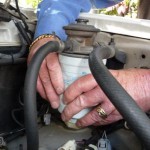 A coroner’s report that found traces of narcotics in the remains of journalist Michael Hastings has helped frame the prevailing story of his death as a tragic, troubled-soul narrative.

He apparently had relapsed into drug use, and just hours before the muckraker was killed in a car crash in Los Angeles, a sibling had arrived to urge him into rehab.

But in the broadest post-mortem profile to date, Gene Maddaus writes in the LA Weekly that Hastings told a neighbor he feared that the rental Mercedes sedan he died in had been tampered with. Maddaus writes:

“One night in June, he came to (neighbor Jordanna) Thigpen’s apartment after midnight and urgently asked to borrow her Volvo. He said he was afraid to drive his own car. She declined, telling him her car was having mechanical problems.

“He was scared, and he wanted to leave town,” she says.

“The next day, around 11:15 a.m., she got a call from her landlord, who told her Hastings had died early that morning. His car had crashed into a palm tree at 75 mph and exploded in a ball of fire.”

The profile said Hastings was depressed and feared he was being watched by the government. “His behavior grew increasingly erratic,” Maddaus writes. He added, “Interviews with friends as well as the coroner’s report suggest that Hastings’ mental health was deteriorating.”

Hastings, 33, was a crusading journalist who died when his speeding Mercedes slammed into a palm tree at 4:20 a.m. June 18 on a 35 mph stretch of North Highland Avenue in L.A.’s Hancock Park neighborhood.

In its report released this week, the Los Angeles County Coroner’s Department concluded that the death was an accident.

Ribe said Hastings died of “blunt force trauma consistent with a high speed front-end impact” and that narcotics were “unlikely contributory to death.”

The report’s narrative included several mentions of Hastings’s alleged use of various narcotics, apparently based largely upon comments from the brother who was attempting to intervene.

But another Hastings family member told WhoWhatWhy that the coroner’s report was “irresponsible.” The family member said via email, “The LAPD has done a really sloppy job investigating his case, and they were hoping for a mother lode of drugs in his system. When they didn’t get it in the toxicology lab results (science!), they had to insert speculation throughout their field report to compensate for their lack of an investigation. It’s so irresponsible.”

Dr. Ribe, who signed Hastings’s autopsy report, has been on the L.A. County coroner’s staff for more than 25 years. Like many big-city pathologists, he has been involved in a number of high-profile cases and controversies.

But Ribe is the rare coroner whose credibility has been officially called into question by a panel of judges.

In 2003, a California appeals court dismissed a murder conviction because prosecutors had failed to disclose to the defense that Ribe, a trial witness, had “credibility problems” and “a history of changing his testimony,” according to an account in the Los Angeles Times.

The ruling cited five instances in which Ribe changed his findings in homicide cases.

In addition, Ribe was involved in a controversy concerning the 2005 death of Eliza Jane Scovill, age 3. The coroner ruled that the child died of AIDS. Her mother, Christine Maggiore, is an HIV-positive activist–and a controversial figure in her own right–who has vehemently questioned Ribe’s ruling on the cause of death.