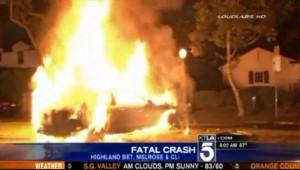 Toxicology tests showed traces of amphetamine in journalist Michael Hastings’s body after his fatal car wreck in Los Angeles on June 18, the Los Angeles County Coroner’s Department said Tuesday, though it said the drugs were “unlikely contributory to death.”

The coroner also released previously undisclosed details of the Los Angeles Police Department’s investigation, which showed that the journalist apparently had relapsed into narcotics abuse after years of sobriety. Two of Hastings’s siblings had arrived in California the day before the fatal wreck, the report said, and “the family was attempting to get decedent to go to detox.”

The coroner said small amounts of methamphetamine and marijuana were found in Hastings’s blood.

But a Hastings family member had a surprising reaction when contacted by WhoWhatWhy, calling the coroner’s report “irresponsible.”

“I can honestly say with absolute certainty that he wasn’t doing meth,” the family member, requesting anonymity, told WhoWhatWhy in an email. “‘Methamphetamine’ can be nasal spray, Sudafed, one of those upper drinks at the gas station, prescription amphetamines, etc.”

The family member continued, “The LAPD has done a really sloppy job investigating his case, and they were hoping for a mother lode of drugs in his system. When they didn’t get it in the toxicology lab results (science!), they had to insert speculation throughout their field report to compensate for their lack of an investigation. It’s so irresponsible.”

Like the LAPD, the coroner ruled without equivocation that the death was an accident. Hastings’s widow, Elise Jordan, also called his death “a really tragic accident” in a recent TV appearance.

The post-mortem was conducted on June 20 by Dr. James K. Ribe, L.A. County’s senior deputy medical examiner. It was released Tuesday, four days after the coroner’s department received results from the toxicology tests.

Dr. Ribe concluded, “The cause of death was massive blunt force trauma consistent with a high speed front-end impact…Death was very rapid, within seconds. Loss of consciousness was likely instantaneous upon impact.”

He added that the carbon monoxide level in Hastings’s body “was consistent with instantaneous death.” The body was scorched, but the CO detail was a small kindness amid the gruesomeness: It means that he did not inhale combustibles; the body burned after he was dead.

Hastings, 33, was a muckraking journalist who won the prestigious Polk Award for his 2010 take-down of Stanley McChrystal, “The Runaway General,” in Rolling Stone. The spectacular nature of the high-speed, fiery one-car crash that killed him—at 4:20 a.m. on a 35 mph stretch of a four-lane city street in L.A.’s Hancock Park neighborhood—has led to speculation by some that he had been targeted for murder.

But the police and coroner’s reports give a sad narrative glimpse of recent troubles in Hastings’s  life that have been hinted at but never publicly confirmed by his loved ones.

The coroner said police had learned from his brothers that Hastings, sober for 14 years, “had started to use drugs again the past month or so.” He was using medical marijuana to treat post-traumatic stress disorder, a residual of his work as a war correspondent in the Middle East. (After the crash, authorities found in Hastings’s wallet his medical marijuana ID card, issued by the State of California.)

The police report said Hastings’s “social HX,” or medical history, included “polysubstance abuse.” It said Hastings had used marijuana the night before the crash and was also known to be using Dimethyltryptamine, the hallucinogen known as DMT.

Although names were redacted, the coroner’s report indicates that two of Hastings’s brothers had grown so alarmed about his narcotics abuse that they traveled to Los Angeles to urge him into rehab the day before the crash.

One of the brothers, apparently staying next door to Michael’s rental home, told police he visited there at between 12:30 and 1 a.m., about four hours before the wreck. He said Michael was “passed out,” and he left him there.

The police report said, “He [Hastings’s brother] had no idea where decedent may have been traveling to or from at the time of the collision.”

The brothers learned of the fatal crash when police went to the Hastings residence soon afterwards, seeking next of kin for the grim duty of death notification.

Dr. Ribe said in his autopsy report that the amphetamine found in Hastings’s blood sample was “consistent with possible intake of methamphetamine many hours before death.” He said traces of marijuana metabolite also indicated “intake hours earlier.”

In one incongruous detail, the coroner’s report said Hastings was wearing a seat belt when he crashed. It took firefighters 30 minutes to extricate his charred body from the scorched wreckage. Among many other injuries catalogued during the June 20 autopsy, Hastings’s skull was fractured at the crown of his head—presumably from contact with the steering wheel.

WhoWhatWhy has reported that video evidence showed Hastings’s speeding car, a 2013 Mercedes sedan, careen out of control and strike a towering palm tree in the median of North Highland Avenue near its intersection with Melrose Avenue. The car exploded in flames. The newly revealed details said police found “a couple of apparently empty alcohol bottles” near the car, but it wasn’t known if they had come from the Mercedes.

Investigators considered the possibility that the crash was a suicide:

“Upon inquiry, decedent’s history was not known to include any past suicide attempt/s or ideation/s; however, (name redacted) added decedent believed he was ‘invincible,’ believing he could jump from a balcony and would be okay. He added he would not be surprised if any stimulants were found within the residence, including cocaine.”

The report revealed that Hastings survived an eerily similar wreck when he crashed into a pole “several years ago,” during a period when he was abusing Ritalin. The location of that wreck was not specified in the report. The report said Hastings went through drug rehab for Ritalin abuse in 1999, at age 19.