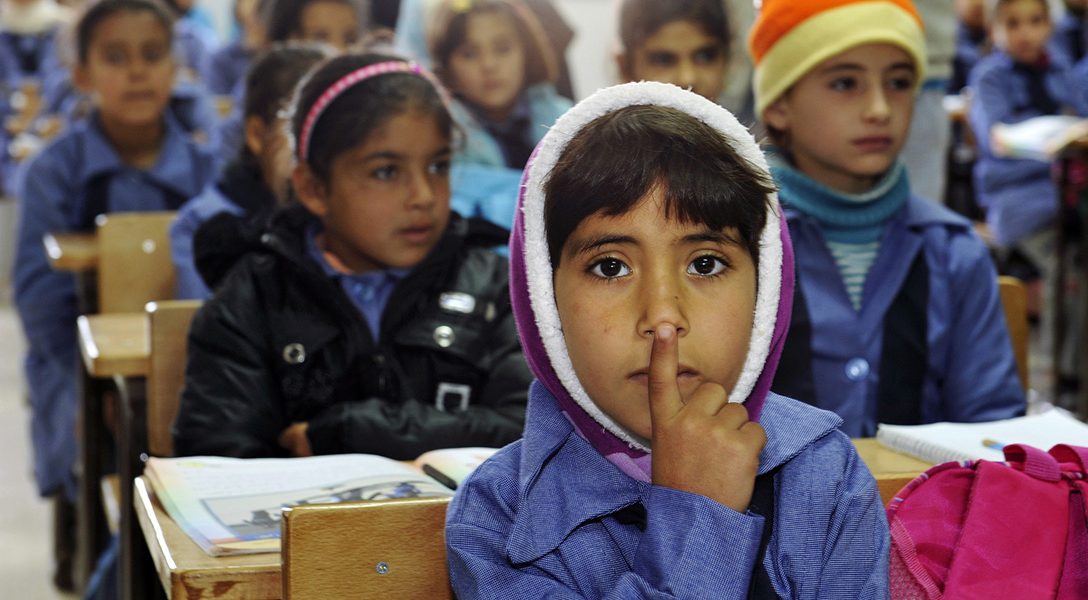 Refugee children come together in a classroom while coping with life as a child of war and conflict. The Za’atri refugee camp near Mafraq, Jordan hosts tens of thousands of Syrians displaced by the violence unleashed by Assad.   Photo credit: United Nations Photo / Flickr (CC BY-NC-ND 2.0)
Journalism & Media

Cries From Syria, a Scorching Documentary

The ongoing carnage in Syria is impossible to ignore for anyone who makes the least effort to keep up with world news. Yet it is hard to react with sustained outrage to an ongoing tragedy so remote. Or perhaps it is simply too painful for us to contemplate — especially if we feel there is nothing we can do about it.

But film can bring the reality home like nothing else. Several recently released documentaries warrant high praise for doing just that. One is Cries from Syria, which I saw during the Sundance Film Festival — jarringly up close, in a private home, at a screening hosted by the organization FiReFilms. By the time the final credits roll, one feels, well, violated. And that’s the intent.

Unbearable to Watch, Impossible to Turn Away

Cries from Syria is the most harrowing depiction of violence and tragedy I’ve seen in a long time. It is so horrific that at multiple points it seems almost impossible to continue watching, yet few would dare get up and leave. And that’s a good thing.

Taken from hundreds of hours of war footage shot by Syrian activists and citizens, Cries from Syria is a comprehensive account of the brutal, intramural five-year conflict. This documentary, aired by HBO,  illustrates a side of the war to which very few viewers have been exposed. From the moment early on when we see a closeup of a drowned child, we know the filmmakers will not stint on showing us the unvarnished truth.

Perhaps worse than seeing the aftermath, we see horrors — in the process of happening. It is almost unbearable to watch a father as he tries to save his children on a rickety boat and sees them drown one by one. Next, a school is destroyed by a missile, followed by a town that is wiped out by a chemical attack.

Before our eyes, one atrocity after another is visited on the populace, each more appalling than the last.

Who is doing what to whom? In this multi-sided war of attrition, it is difficult to identify the players. Almost overnight, old alliances dissolve and new ones form. Members of one anti-government faction often hate those of another rebel faction even more than they hate the pro-Assad forces. And the hate is as searing as a blow torch.

Some groups seem to favor a particular style of atrocity. There’s the astonishing savagery of Assad’s forces, who appear responsible for unleashing poison gas (sarin) and barrel bombs (cheap, crude kegs filled with explosives, oil, and shrapnel). ISIS seems to specialize in beheadings.

And then there is the general mayhem created by all the rest —  rebels backed by Saudi Arabia and other Sunni Arab states, Iran-backed Shia, pro-Assad Hezbollah, members of Al Qaeda and Al Nusra, and of course Russia and the unconscionable, relentless air strikes we are told are its handiwork. None seem to spare women, children, babies, the wounded, ambulances, or hospitals.

To be sure, one must be cautious about affixing blame or intention in such a complicated, fluid situation with so many unknowns. Nonetheless, the Russian angle is especially interesting because the film was made by the well-respected Evgeny Afineevsky, who was born in Russia, and then lived in Israel and now in the US. He also made a powerful film about the “Maidan” uprising in Ukraine, Winter on Fire: Ukraine’s Fight for Freedom.

What makes Cries from Syria so potent is the combination of verite footage, as the bombs drop and the people die, and the heart-rending stories told by victims — remarkably resilient, articulate, stoic people who recount kidnappings and torture, and the fallout from those chemical attacks and barrel bombs.

Narrated by renowned English actor Dame Helen Mirren, the film features Syrian journalist and activist Kholoud Helmi. The 33-year-old Helmi, who now lives in Turkey, shares her personal story of watching her brother being arrested and taken from their home. Five years later, Helmi does not know if he is still alive. But she has learned that an uncle and many cousins and friends have been killed during this seemingly endless conflict. Helmi had been brought to the screening in beautiful and serene Park City, Utah, where the contrast between film and setting could not be more pronounced.

A problem with this production, as with so much movie-documentary storytelling, is that the connections between the on-screen human story and the geopolitical backstory remain invisible. Yet the backstory is the cause of the human story.

What’s missing is any sense of the US’s role in opening the floodgates, creating the conditions whereby Assad, his back to the wall, has nothing to lose by inflicting the heaviest possible damage on rebel areas. For another perspective on the backstory, please read these previously-published WhoWhatWhy articles: here, here, here and here.

Yet the film’s powerful presentation of the on-going horrors of war reminds us that we need to do much more to learn what our government is doing in the world with our tax dollars — and that “out of sight, out of mind” on matters like this is not acceptable. If Cries from Syria makes more people see the Syrian victims of the war as fellow human beings to whom attention must be paid, if it makes clear that the refugees from this monstrousness are in fact deeply our responsibility, then it has served its purpose.