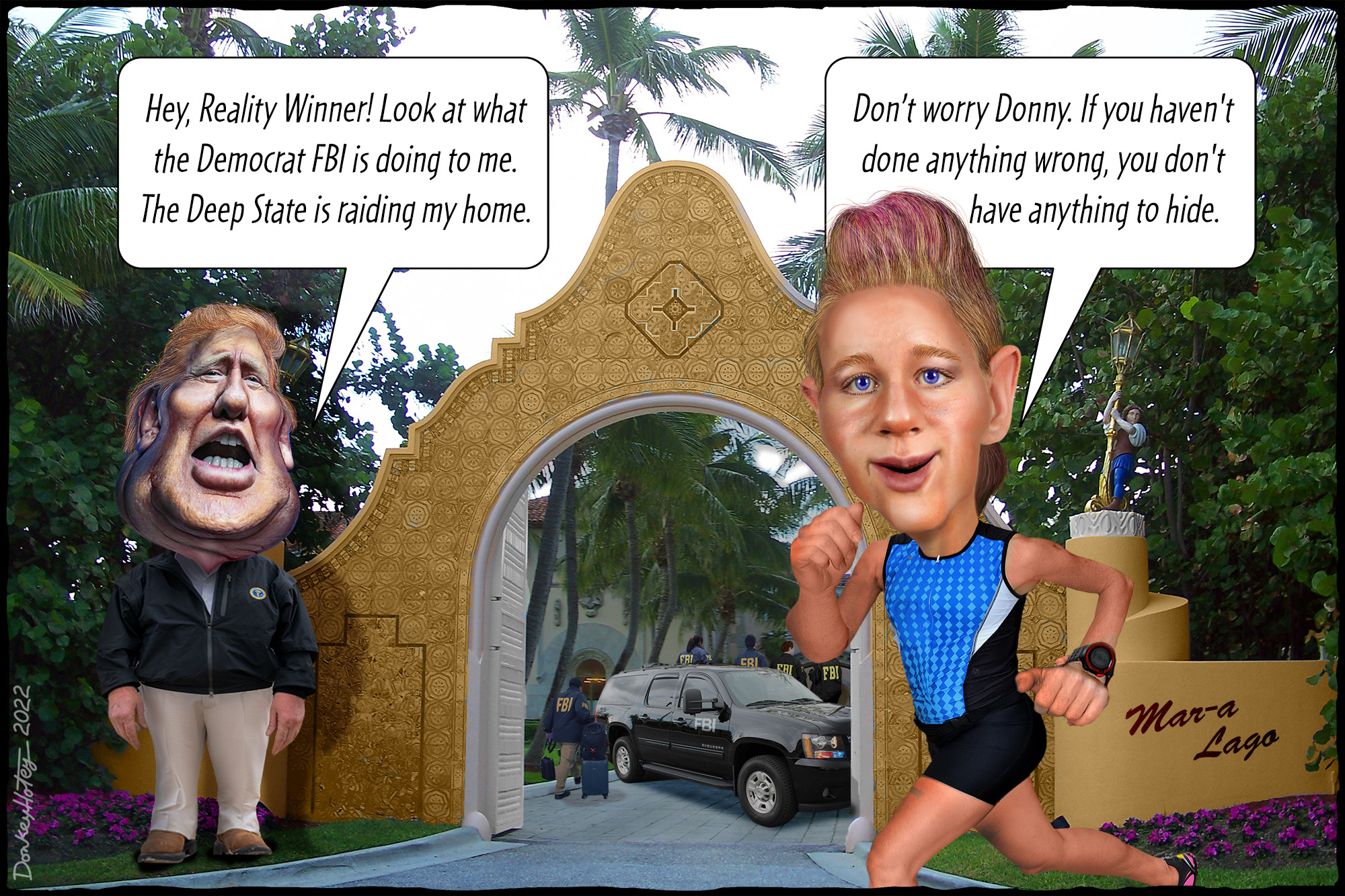 We are sure that Attorney General Merrick Garland and FBI Director Christopher Wray are avid readers of our column, so it should come as no surprise that the FBI (finally) raided former president (and coup initiator) Donald Trump’s Mar-a-Lago compound the day after we wrote about his federal records violations and other criminal behavior.

What is surprising (and, quite frankly, refreshing), however, is how many Republicans are finally coming around to the idea that Trump should be treated like any other American who commits crimes.

Just look at this tweet from the Republicans on the House Judiciary Committee who, in the past, were among Trump’s most loyal lapdogs.

It almost moved us to tears that Trump sycophants like Reps. Jim Jordan (OH), Louie Gohmert (TX), Matt Gaetz (FL), and Andy Biggs (AZ) have put Americans on notice that they, too, could expect the FBI to raid their homes if they staged a coup and illegally mishandled classified records.

What is especially remarkable in their case is that several of them may well be in legal jeopardy for their own roles in the coup attempt and, in the case of Gaetz, also for having sex with a minor.

But do these brave lawmakers care?

Nope! What they seem to be saying here is that they would gladly welcome the FBI when it comes kicking down their doors for the parts they played in the attempt to overturn the 2020 election (or sleeping with an underage girl). Just like any other American would be if they committed the same crimes.

Does this tweet mean that these lawmakers will end their own obstruction of justice of the investigations into Trump’s failed coup? One can only hope.

By the way, thanks to the actions of (actually courageous) Reality Winner — and what happened to her — we do not have to “imagine what they can do to you.” Because we already know.

Let’s have a look, shall we?

Winner was arrested in 2017 for leaking a classified National Security Agency document to the press. This document described Russian attempts to interfere in the 2016 election by hacking voting technology. It does appear that this effort was less successful than other attempts of the Putin regime to intercede on Trump’s behalf.

Should Americans know about this attack on democracy? Winner certainly thought so (while the Trump administration apparently — and perhaps understandably — felt differently).

What did she get for her attempt to alert the country to Russian interference, aka “mishandling classified information?”

Four years behind bars; that’s what she got.

So, if Trump were treated like an average American, then he can look forward to serving yet another term… this time in prison.

And, while Winner was convicted of mishandling one classified document, it’s believed that the list of classified documents Trump failed to turn over, i.e., “mishandled,” is three pages long. Oh, by the way, Winner never tried to overthrow the duly elected government.

But back to our proud “law and order” Republicans on the Judiciary Committee. Here is another tweet from them (it’s been quite the couple of days on Twitter):

This is what happens in third world countries.

Not the United States.

Doesn’t the FBI have better things to do than harass the former PRESIDENT? https://t.co/XoP6hz5hDR

Indeed! Even in developing nations, former wannabe dictators are (sometimes) held to account. As the lawmakers note, that has not been the case in the US, where Republicans previously acted as though Trump was above the law — whether he admitted to serial sexual assault, sought Russia’s help to win the 2016 election, tried to extort Ukraine’s president for political gain, or staged a coup attempt.

But apparently no longer.

It’s also nice to see that they are ending the tweet with a rhetorical question. Of course, the FBI doesn’t have anything better to do than to show the American people that nobody is above the law — and that this bedrock of US democracy also applies to such a notorious crook as Trump.

What could be more important than that? And Jordan, Gaetz, et al. seem to agree.

One can only hope that their courage will spread to other Republicans and/or their propaganda outlets.

So far, it’s not looking promising. In just the initial hours after the raid, the fine folks at Fox “News” focused on the real criminal here: No-good first son Hunter Biden, who will likely be a target of numerous congressional investigations if the GOP takes over either chamber of Congress this fall. And by “take over” we don’t mean like their last attempt on January 6, 2021. In this case, we mean by winning the upcoming election that they are trying to fix through gerrymandering and voter suppression.

Focusing on Hunter Biden isn’t the major own Fox News hosts and guests seem to think it is. Because the answer to the question, “Should Hunter Biden, as an American citizen, be held to account for any crimes he committed, even if they do not rise to the level of treason and insurrection?” is obvious:

Duh, of course he should be. That’s the whole point of “nobody is above the law.”

We, for example, have called him out at various times… because that’s how this works. If his behavior rises to the level of criminal activity, he should be prosecuted and his dad should stay out of it. As we have argued before, even if that behavior were not criminal and instead “just” shady, he should still stop it.

And that’s how easy it is… or at least it should be.

But when everything is a political deathmatch to you — like it is for the modern GOP — then the rule of law is one of the first casualties.