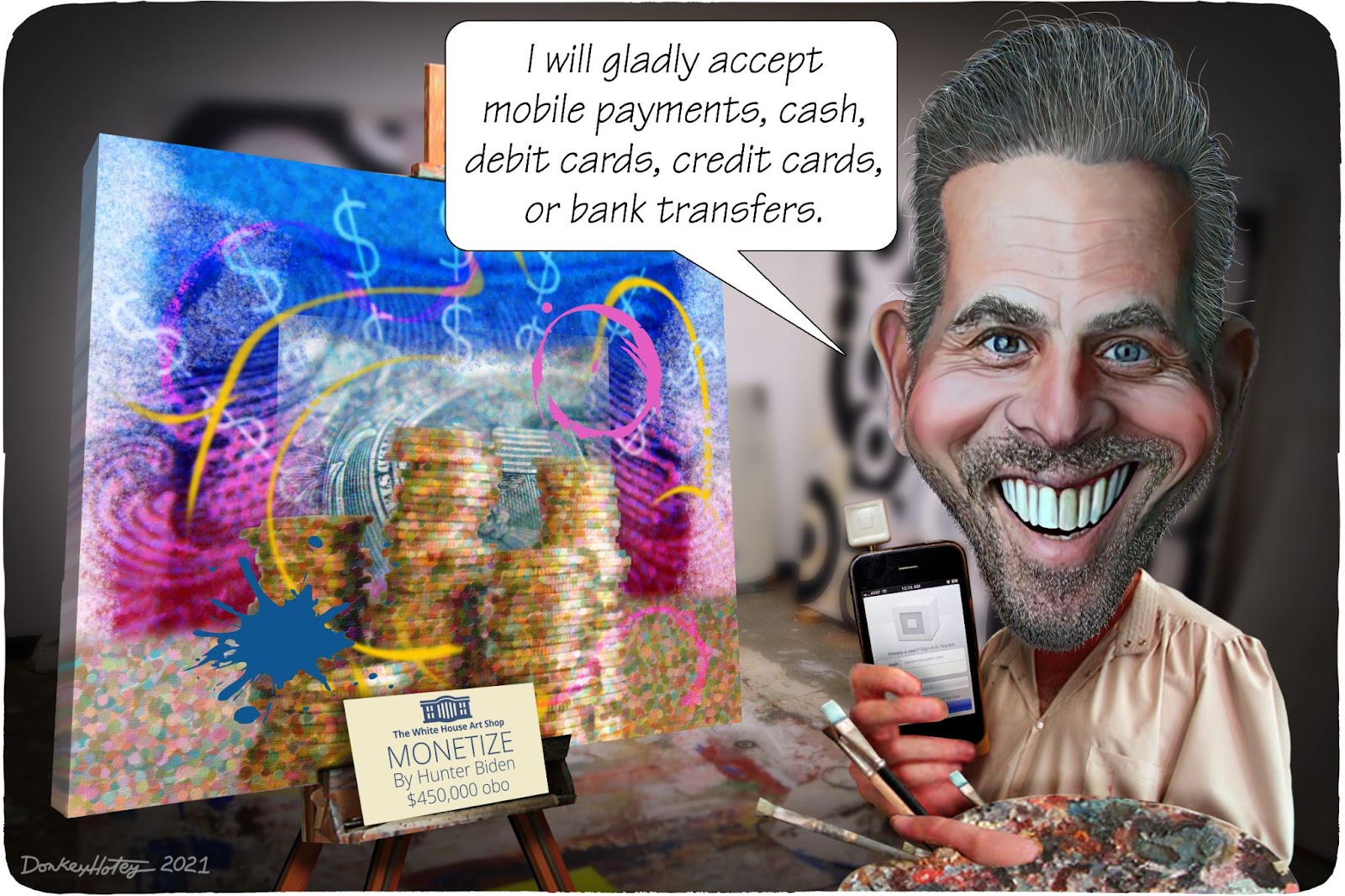 If giving the appearance of corruption were an art form, Hunter Biden would be a maestro. Since it is not, however, he is just an amateur painter trying another hustle to make a buck (or a million) off his dad’s name. And, let’s be honest, if that last name were Trump, a lot of people biting their tongues now would be calling it a scam.

They would be right.

If you are unfamiliar with the story, Hunter Biden has been creating art for some time. His hobby took a serious turn, and he is trying to sell some of his paintings this fall. They are expected to be priced between $75,000 and $500,000, which seems ridiculous. After all, who would pay that much money for the works of a former board member of Burisma Holdings? Maybe people, groups, or countries trying to curry favor with his dad?

While ethics experts acknowledge that this is not illegal, it sure seems like a very sketchy way for the son of a president to funnel large sums of money into his own pockets. Hunter Biden may not be much of a painter, but he sure seems to be a Trump-level con artist.

Worst of all, his dad isn’t putting a stop to it.

And that gets right to the heart of the matter: Joe Biden was supposed to be different. After four years of having a truly contemptible, immoral person in the White House, Biden cast himself as the decent, moral alternative.

The incoming president was supposed to put an end to the nepotism and corruption that had become so routine in the previous four years. But now, faced with a clear opportunity to do so, he is failing miserably.

Biden’s supporters might argue that, due to the many family tragedies in his past, it is understandable that he is turning a blind eye toward the transgressions of his son. And this, anyway, is very different from the type of self-dealing Trump & Co. was routinely guilty of.

They may be right about this being different. In many ways, it’s worse.

First of all, there is the scam itself. This isn’t one of those clumsy schemes of the Trump clan and its hangers-on to enrich themselves off taxpayer money, campaign donations, or bribes from individuals and governments.

Because the good thing about those run-of-the-mill cases is that people from Donald Trump’s orbit keep getting caught, like his friend and adviser Thomas Barrack just last month.

Instead, this is something creative (certainly more so than the art itself). It’s clever, it doesn’t break any laws, but it sets a very bad precedent. If this is allowed, what’s to stop a foreign sports team from signing Hunter Biden to a $20 million contract, or a film company from offering him a highly paid role in a movie?

It doesn’t even matter whether the art is good, which is an entirely subjective matter. Hunter Biden could be the next van Gogh, and it would still look off-color. If he is that good, and his art is worth that much, surely he can wait until his dad is out of office and just paint in the meantime. It’s not as though he is poor.

Or he can display his works anonymously like Banksy, the elusive street artist, who could be the queen of England for all we know.

It also doesn’t matter whether the buyers ever ask for a favor. Ultimately, this art sale looks highly inappropriate and as though there ought to be rules against this type of thing.

Joe Biden should know this, especially because corruption and lawlessness were such hallmarks of Trump’s term in office. While putting the country first was never an option for Trump, it should be the highest priority for his successor.

There should be a true zero-tolerance policy when it comes to members of the president’s family — especially Hunter, who was always going to be his greatest liability.

Instead, the White House put out a laughable statement saying that “the president has established the highest ethical standards of any administration in American history, and his family’s commitment to rigorous processes like this is a prime example.”

Say what? The only message this statement — and the president’s inaction — is sending is this: “All politicians are the same and just want to line their own (or their family’s) pockets.” And it’s understandable why people would feel this way.

Needless to say, this has provided welcome ammunition for whataboutists, and an opportunity for right-wing media to talk about Hunter Biden… and in this case, it wasn’t even manufactured outrage.

Finally, let’s look at the president’s son and what painting means to him. When The New York Times published its first article on Hunter Biden the artist in early 2020, they quoted him saying that painting “is literally keeping me sane,” allows him to put his “energy toward something positive,” and keeps him “away from people and places where I shouldn’t be.”

His battle with addiction has been well documented and, as the Times story points out, cocaine and booze were his constant companions for years. So, it’s laudable that he is trying to do something to exorcise those demons. However, it’s painting that keeps him sane, not selling paintings. And, news flash, if you want to stay away from alcohol and cocaine, then the art scene may not be the best place to be.

If he really wants to do something positive, then he should donate all proceeds — maybe to fund art programs in schools or to help others kick their addictions. Now that would be a pretty picture.