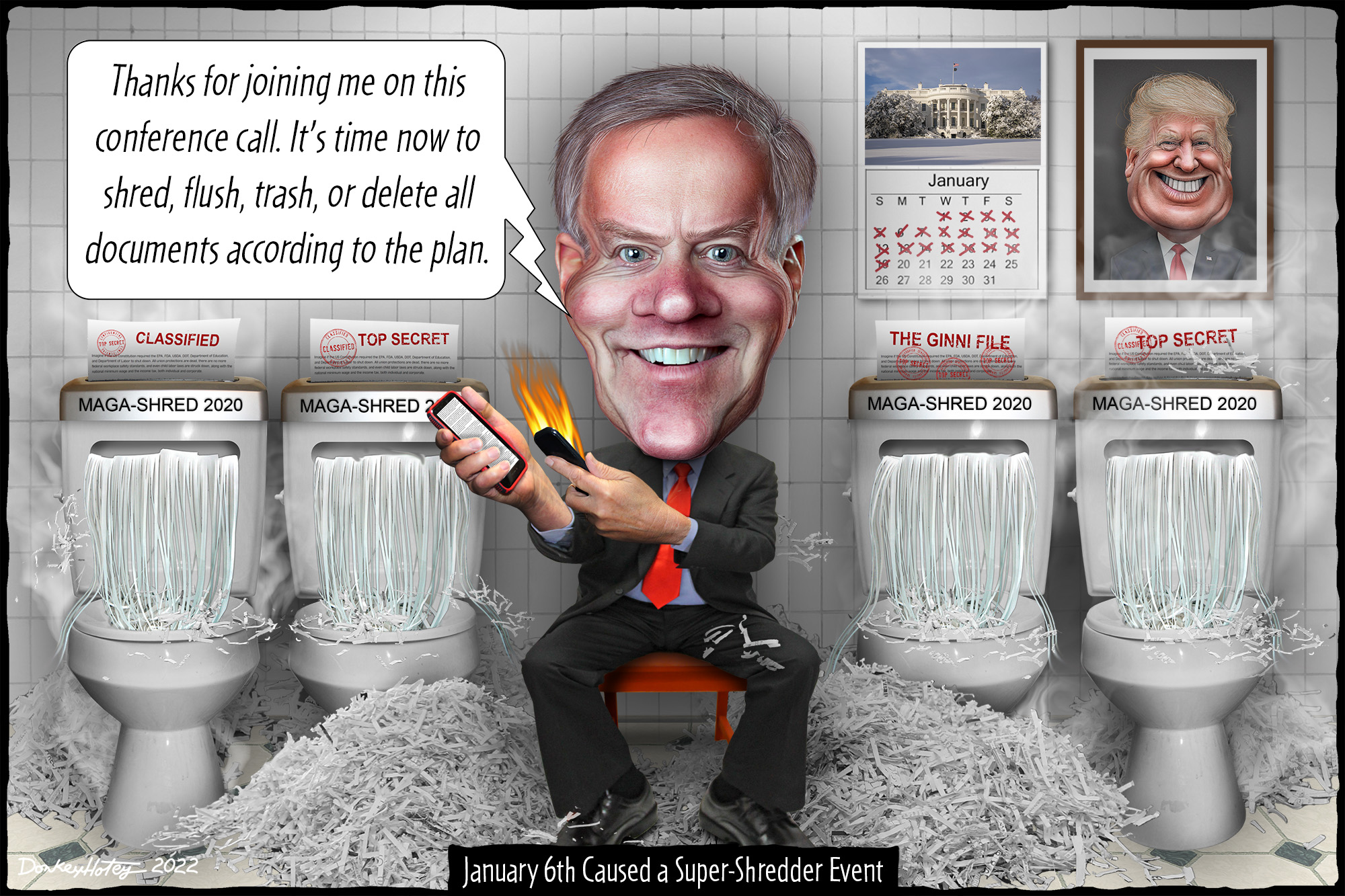 Lock Them All Up

The American justice system is imperfect, which is a charitable way of saying that it’s a real mess. If you are an unarmed Black man, for example, you might want to take your chances running from the cops even if you only committed a minor crime or are innocent altogether. At least that way you’d be more difficult to hit when they start shooting.

If you are a well-connected rich white guy, however, there really is no reason to run from the law, plead the Fifth, destroy evidence, fight subpoenas, perjure yourself, or seek pardons.

Well, unless you did it, of course.

In that case, you might do all of these things and take your chances that justice truly is blind.

Which brings us to the people who are now trying to cover up their attempt to overthrow the duly elected government of the United States.

Initially, we wanted to compile a list of all of the individuals and agencies that have obstructed the various investigations in one way or another, but this is supposed to be an editorial, not a 500-page Dostoyevsky sequel entitled Crime and No Punishment (US Coup Edition).

Let’s just say that it appears as though more documents were destroyed by former President Donald Trump, his chief of staff Mark Meadows, the Secret Service, and the Pentagon (just to name a few) than in one of Florida Gov. Ron DeSantis’s (R) history textbook bonfires.

Mind you, in many cases, this destruction of government records is likely illegal. Of course, if you are involved in traitorous activities against that same government, you probably don’t care all that much about document preservation laws.

Then there is the seven-hour gap in Trump’s phone log on January 6. According to the official records, while his supporters successfully ransacked Congress and unsuccessfully looked for vice presidents to hang, Trump, who loves calling people, supposedly did not pick up his phone.

Some media organizations have referred to this as “mysterious.” We hate to break it to them, but there is no mystery here. Everybody knows that you cover your digital footprint when you are in the middle of committing a crime. This is especially true if that crime is attempting a coup, which is generally frowned upon (although not by a majority of Republicans).

If Trump weren’t one of three presidents in history to not have had a pet in the White House, he could have claimed that his dog ate the phone records and all those other documents and devices (he has claimed that he “lost” phones requested in another investigation into his criminal activities). Of course, we are talking about so many records here that he would have needed a pet the size of a hippo.

Add to that all of the people in Trump’s orbit who are in some legal trouble already or are trying to obstruct justice in various forms, and there is only one conclusion (unless you are a member of the MAGA cult or the timid attorney general of the United States): There was a whole lot of criming going on after the 2020 election.

In fact — and this should surprise nobody who has followed Trump — his White House often resembled a criminal enterprise more than anything else. Even his supporters talked about the ex-president like he was a mob kingpin.

On some level, it’s no surprise that the people involved are trying to cover their old white behinds. Like a good crime boss, Trump has shown that he will set his mob loose on anybody who isn’t on board with the Big Lie and the coup attempt.

Speaking out against him would undoubtedly lead to harassment and death threats from the faithful.

On the other hand, this would also be the best chance for the GOP to rid themselves of Trump in a somewhat elegant manner.

“What was I supposed to do? I was under oath,” would be a pretty good excuse for helping put away the big guy.

In addition, it certainly seems as though lots of people were engaged in serious crimes. Coming clean might just allow them to get off the hook.

And that’s the key to uncovering the entire conspiracy and punishing the perpetrators — not just the hundreds of foot soldiers who stormed the Capitol, but those who spent weeks trying to undo the will of the American people.

Because, while it is often said that the cover-up is worse than the crime, that’s only true if the crime is getting a BJ from an intern in the Oval Office, sending out a handful of classified emails from your Yahoo account, or even burgling the offices of your opposition. But it’s certainly not the case when you were plotting to overthrow the government.

Will any of this matter to the MAGA crowd that wanted to lock up Hillary Clinton* and throw away the key for… *drum roll*… violating federal records rules?

But this isn’t about converting them (although a slam-dunk case with people testifying against Trump would make it more difficult to create another Big Lie of his “innocence”).

The reason his co-conspirators continue to obstruct justice is that just about all of them have escaped any kind of accountability so far. If the Department of Justice finally gets serious about charging the higher-level people, and they are faced with the question of whether they would rather protect Trump than be with their family, then maybe we can tear down this mob-like wall of silence.

*This isn’t to say that Clinton’s behavior should be excused. The original offense was dumb, and the cover-up was even dumber. But if you were rabidly calling for her arrest for years, then you can’t possibly give Trump and his fellow lawbreakers a pass — especially because many different records laws were broken in their case, and that is the least of their crimes.