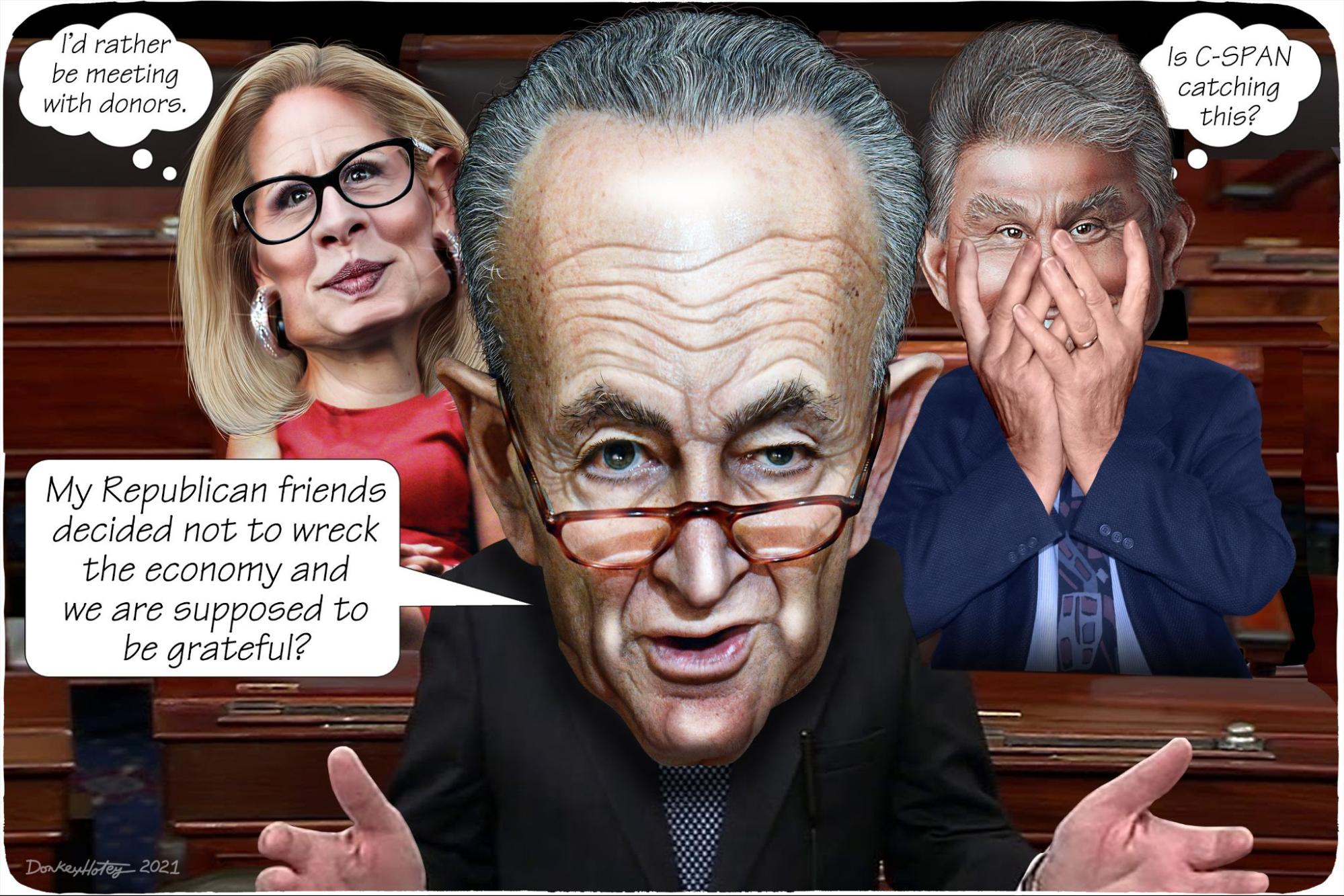 Every election, Democratic lawmakers are voted into office based on promises that they will make transformative changes to a society that increasingly favors only the rich and powerful while leaving everybody else behind.

And every time, they fail to deliver.

Now, however, with the party in full control of the White House and Congress — and therefore optimally positioned to make major investments in infrastructure, ward off a climate catastrophe, raise the minimum wage, improve the health care of all Americans, and pull millions of families out of poverty — a couple of Democrats are sticking up for their beliefs and their constituents.

Unfortunately, those two are Sens. Joe Manchin (WV) and Kyrsten Sinema (AZ)… and their constituents are corporations and lobbyists hoping to derail any attempt to make life better for ordinary Americans.

It’s a familiar script: After finding themselves in power, feckless Democratic leaders immediately proceed to waste even the most promising opportunities.

Instead of enacting any of the bold and popular ideas they ran on to get elected, they will bicker among themselves, bend over backwards to appease dissenters within their own ranks instead of strong-arming them, chase elusive Republican support, and, in the end, pass some sort of half-measure (if anything at all) that leaves the base frustrated and costs Democrats in the polls.

Scott perfectly followed the GOP’s playbook: Dangle a bipartisan compromise in front of Democrats, get them to make major concessions, and then end negotiations under some pretense.

Unsurprisingly, this is exactly how things are playing out once again this year. While the massive spending package that is at the heart of President Joe Biden’s Build Back Better agenda — and which Manchin and Sinema try to torpedo at every turn — is the most prominent example of the Democrats’ inability to get things done, the best one may be the effort to craft bipartisan police reform legislation.

After spending months claiming to be trying to find common ground, Sen. Tim Scott (R-SC) walked away from the negotiating table late last month. He falsely claimed that the reason he broke off talks was that Democrats wanted to “defund the police” when the truth is just the opposite — as noted by policing organizations, the legislation crafted would provide “additional funding to assist law enforcement agencies in training, agency accreditation, and data collection initiatives.”

Scott perfectly followed the GOP’s playbook: Dangle a bipartisan compromise in front of Democrats, get them to make major concessions, and then end negotiations under some pretense. And, just like that, six months have been wasted that Democrats could have spent on crafting their own bill. Of course, who knows under which pretenses Manchin, Sinema, or other conservative Democrats would have sunk that legislation.

But let’s go back to the Build Back Better Act because it perfectly illustrates the difference between the two parties and how they operate when they are in power.

First of all, it is legislation that Democrats absolutely must pass to have anything to show for before the midterms.

Even more importantly, the bill being considered now is desperately needed. Together with the slimmed-down infrastructure bill that has already passed the Senate, the spending package would invest billions in fixing crumbling roads and bridges, incentivize a switch to green technologies, and offer much-needed assistance to non-millionaires. These are essential investments that have been put off for too long and can no longer be delayed.

Finally, considering the results of another round of redistricting, the traditional advantage of the minority party in the midterms, and a favorable Senate map for the GOP, it is very likely that the Democrats will no longer control Congress after next year.

That means they must act now to deliver on their promises or squander yet another opportunity to do some good.

To be fair, most Democrats seem to understand this and be willing to reach a compromise that would result in a meaningful investment in the US. However, that is all for naught because a couple of senators and a handful of lawmakers in the House are putting themselves above party and country.

And here is the most baffling part: Most of what’s in the legislation is very popular, so it’s not as though they would be taking a great political risk by supporting it.

This is true for many Democratic policies. From taxing billionaires and raising the minimum wage to passing some gun control measures and investing in green technologies, even in a deeply divided country, Democrats generally champion the more popular ideas.

They just never get any of them done.

Republicans, on the other hand, seem to have no problem pushing through even the most unpopular ideas; they simply don’t care what majorities think.

Through gerrymandering and voter suppression laws, Republicans have been able to choose their voters — instead of the other way around.

A great example is the new Texas anti-choice law. Every single demographic group is opposed to it, including white evangelical “Christians.” Individual provisions of the law, such as allowing private citizens to sue abortion providers and the prohibition of abortions even in the case of rape or incest, are even more unpopular.

There are different reasons for this paradox: First of all, through gerrymandering and voter suppression laws, Republicans have been able to choose their voters — instead of the other way around. This is especially true in state legislatures, where the GOP gained hundreds of seats in 2010 just ahead of the last round of redistricting and then cemented that power by redrawing election maps.

In addition, the Republican Party is simply not as diverse, and its voters and representatives alike represent a much narrower worldview. Even the most “liberal” Republican in Congress is pretty conservative — or at least votes that way.

To pass a watered-down bill, they are willing to make tremendous concessions, thereby pissing off large parts of their base and denying many of the legislation’s benefits to the American people — all to indulge two narcissistic senators and their need for attention.

Manchin, on the other hand, is much closer ideologically to Senate Minority Leader Mitch McConnell (R-KY) than to Sen. Elizabeth Warren (D-MA) or any number of other Democrats. Therefore, it is significantly more difficult to get Democrats on the same page than Republicans.

Finally, the two parties have a vastly different approach to dissent.

Manchin and Sinema, who are single-handedly derailing Biden’s agenda — Manchin also stands in the way of a robust voting rights bill and reforming the filibuster while Sinema is thwarting efforts to reduce drug prices — are being coddled by the president and other Democratic leaders.

To pass a watered-down bill, they are willing to make tremendous concessions, thereby pissing off large parts of their base and denying many of the legislation’s benefits to the American people — all to indulge two narcissistic senators and their need for attention.

And when Senate Majority Leader Chuck Schumer (D-NY) called out Republicans for recklessly pushing the US to the brink of a debt default this week — and therefore needlessly endangering the livelihoods and savings of millions of Americans — it was Manchin who put his head in his hands as though to indicate that Schumer was wrong for pointing out the GOP’s recklessness.

That visual helped shift the narrative and allowed Republicans to play the victim even though they were the ones threatening to plunge the country into economic chaos for political gain.

As we have seen recently, these things are handled much differently in the GOP. Lawmakers who have the audacity to acknowledge the fact that Biden won the election, or to speak out against the January 6 attack on the Capitol, are punished.

The best example is Rep. Liz Cheney (R-WY). It doesn’t matter that she comes from a family that is GOP royalty or that the conservative Heritage Foundation is giving her a score of 96 percent this year for her voting record in the House. What does matter is that she dared to call out former president Donald Trump on the Big Lie and wants to get to the bottom of what caused domestic terrorists to storm Congress.

These are grave offenses in today’s GOP, which is why she lost her leadership position, drew a primary opponent, and was censured by her state party. Let’s face it, they probably would have stoned her, too, if they could have gotten away with it.

And that’s a key difference between the two parties: Democrats wring their hands and fail to use their power while Republicans twist arms and abuse theirs.