Warning: The story below includes a graphic autopsy photo of Jeffrey Epstein.

Going beyond quickly established “official narratives” is considered risky terrain for news organizations. But we started WhoWhatWhy for that very purpose: to pursue the truth no matter how much it exposes us to criticism from those who play it safe — and often too safe.

Thus, you have seen WhoWhatWhy move away from the pack — and in many cases ahead of it — again and again.

Such is the case of Jeffrey Epstein. The authorities announced quickly after his death that it had been a suicide — end of story. They announced it too quickly for many thoughtful observers. Yet legacy media organizations by and large dropped the story.

WhoWhatWhy continued to probe it, and even launched a newsletter, “Everything Epstein,” to aggregate whatever morsels we could find, even as the story rapidly disappeared from the headlines.

We’re glad we did. Because now comes 60 Minutes, the venerable television newsmagazine, with a report that — while it properly arrives at no conclusions — highlights exactly the kind of anomalies that made us reticent to embrace the official story.

When, on January 6, 60 Minutes interviewed forensic specialist Michael Baden, MD — who was hired by the Epstein family — on why he believed Epstein was murdered, Baden gave many reasons, all intriguing, though some are controversial. It seems especially suspicious that no photo was taken, so we are told, of the body as it was discovered. It was cut down, and soon after taken to an emergency room, even though he was clearly dead.

We recommend watching the whole show to get an idea of why so much skepticism persists.

But one reason for doubt seemed especially compelling, and it was anchorperson Sharyn Alfonsi — not Baden — who pointed it out. This is the focus of our report.

She asked if the bruised furrow in Epstein’s neck was too low to have been caused by hanging.

Baden agreed, and said that, in most hangings, the ligature mark is higher, right under the jaw bone. This made sense, but we wanted to see for ourselves, so we looked for a reliable source of photographs that we thought would not be too upsetting to view.

The European Society of Radiology’s database seems to fit the bill. In every case they present, the ligature mark is at the top of the neck, as high as it can go, just under the jaw. And, as the author notes, the mark is “bilaterally symmetric,” meaning that on both sides of the neck the mark slants upward toward the back of the neck.

Please compare these pictures with the one from Epstein’s autopsy. You can find it at 13:06 minutes into the video. 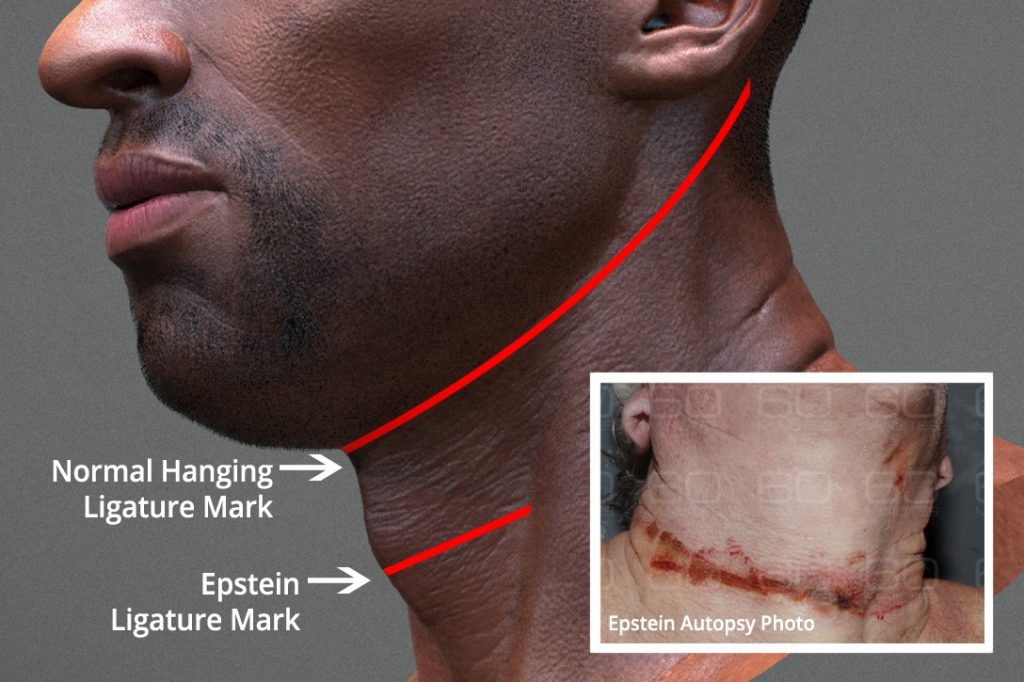 To our non-expert eyes, these marks seem to indicate pressure was applied directly from the front — and are not the result of a noose pulling the body upward as gravity pulled it downward.

The 60 Minutes report certainly raises questions and we would love to hear what readers, especially those with expertise on the subject, make of the new evidence.