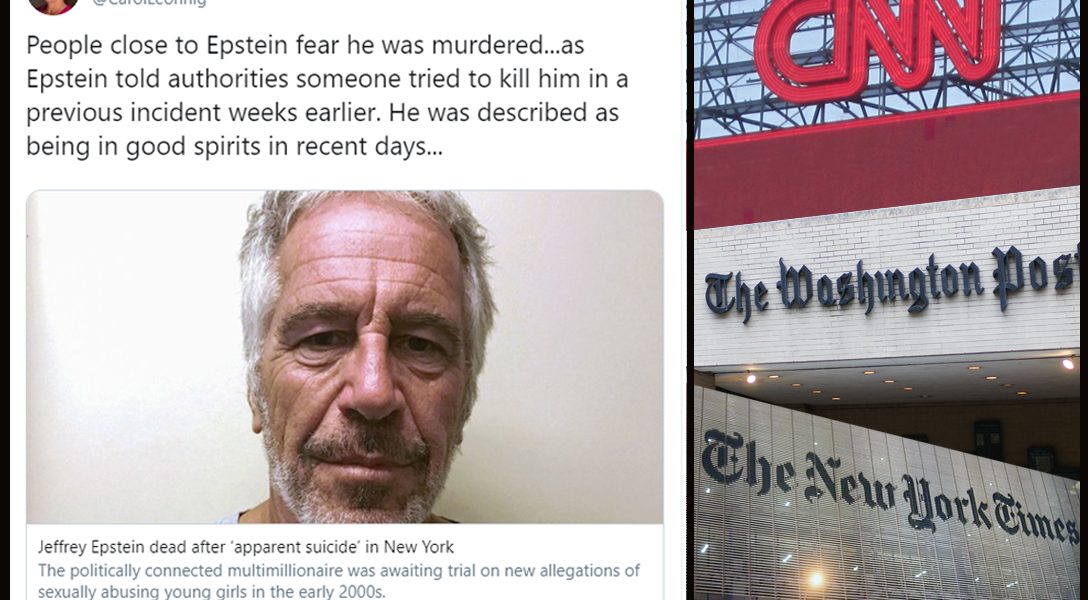 When news broke of Jeffrey Epstein’s death in prison, some corporate media were quick to assure the public — as they so often do — that whatever that was about, it should not be viewed as involving any sort of conspiratorial behavior.

They did question why Epstein was taken off suicide watch, especially since he allegedly attempted to kill himself in July, but few considered foul play.

Even before the medical examiner’s final report, they accepted the government’s statement that Epstein had killed himself. Epstein’s death was labeled a suicide, and, basically, that was that.

Some big media quickly criticized anyone who stepped out of line. Even a major competitor.

Although establishment media usually ignore or ridicule non-traditional media when the latter ask questions that don’t conform to a pro-system bias, they have a tougher time when it is one of their own breaking ranks.

People close to Epstein fear he was murdered…as Epstein told authorities someone tried to kill him in a previous incident weeks earlier. He was described as being in good spirits in recent days… https://t.co/J9QNSo1N2v

In a follow-up tweet the same day, Leonnig reminded readers:

Remember previous incident July 23: it was never cleared up whether Epstein had been attacked, as he said, or if he was covering up his own suicide attempt https://t.co/G7smVLAZqc

In a rare display, we saw other major news organizations take the Post to task. For instance, Rolling Stone. This progressive journal quoted Tim Gleason — a professor of journalism and director of the Payne Awards for Ethics in Journalism at the University of Oregon — who said “I don’t know why she would have tweeted this — what was she thinking? It’s hard not to read that and think she is suggesting something else happened.”

The thing is, many people find the “suicide” scenario suspicious. Of course, quite a few powerful people (even institutions and countries) would potentially be at risk if Epstein were to tell all he knew. Plus, a highly unusual set of circumstances in the jail had to dovetail for possible harm to come to Epstein in jail.

People get that. Which is why recent polls show that just 29 percent of the American public believe it was suicide.

Privately, among themselves, even many journalists whisper their doubts.

Publicly, however, journalism likes to see itself not only as a voice of authority, but as a source of stability and calm — even as we provide the public with a constant stream of revelations that generate anything but.

An unspoken (and occasionally spoken) rule is that the public needs reassurance: that there are limits to the evil that can be done by the powerful.

That’s an essential theme running through American media over the course of time. And it’s a fiction. It explains the gulf between long-running news narratives and what the public thinks or wonders about these narratives — from the assassination of presidents to the possibility of advanced life elsewhere in the universe. All that “crazy” stuff.

So when reporters at the Washington Post reported additional information and analysis that expressed further skepticism about the official line, the system came down hard. Writing in the CNN newsletter Reliable Sources under the headline “WaPo fuels Epstein conspiracies,” Oliver Darcy recounted his own efforts to debunk a Post piece that expressed doubt about the suicide verdict. He called a bunch of medical sources, including Sanjay Gupta, CNN’s chief medical correspondent, who essentially rebutted what the Post said.

The bottom line: “While Gupta rightly noted that there are not enough details to make a conclusion, conspiracy theorists were more than happy to use WaPo’s story as evidence Epstein was murdered.”

And in Darcy’s next sentence, he managed to suggest that only nuts doubted the official story: “InfoWars, for instance, declared that it was now ‘official’ that Epstein ‘was murdered.’ Other less-than-reliable sites and personalities behaved similarly.”

But look at the words of Gupta that Darcy quotes — but ignores: “not enough details to make a conclusion.”

If that is true, then why is it that Darcy has no problem coming to a conclusion? It seems that he is “more than happy” to use only part of the story to promote the official narrative.

Irrespective of the merit of the various claims — and reporters know that it is not hard to find sources to say almost anything, especially on medical and scientific topics — the message was clear: You’re not supposed to do this.

I emailed Darcy — who, along with his colleagues, frequently (and with justification) expresses concerns about reckless and false “conspiracy theories” — to ask him about his efforts on that front. As of press time, he has not replied.

(It should be noted that the New York Medical Examiner concluded that it was a suicide — but, again, journalists have to decide whether the assertions of government officials are enough to settle a matter.)

The real irony here is that, on a daily basis, major news organizations tell stories whose subtext is that the authorities cannot be trusted. Yet, when the rest of the population doesn’t trust the authorities’ line, and says so… Wham! Down comes the hammer.

It’s important to recall that, historically, journalism has not had such a great track record. Media did not report American involvement in foreign coups and assassinations. They did not report on MK ULTRA mind control experiments. They participated in the hagiography of J. Edgar Hoover and his invincible FBI for many years while people in the know understood the darker story. Add your favorite examples of failures to dig or be skeptical.

It was always outliers, “nuts” pooh poohed by the media as “irresponsible,” until the establishment media belatedly came around to the harsher truth. Typically, without having the decency to admit they were wrong, and others right.

This is what the media does — and another reason why the public does not trust them.