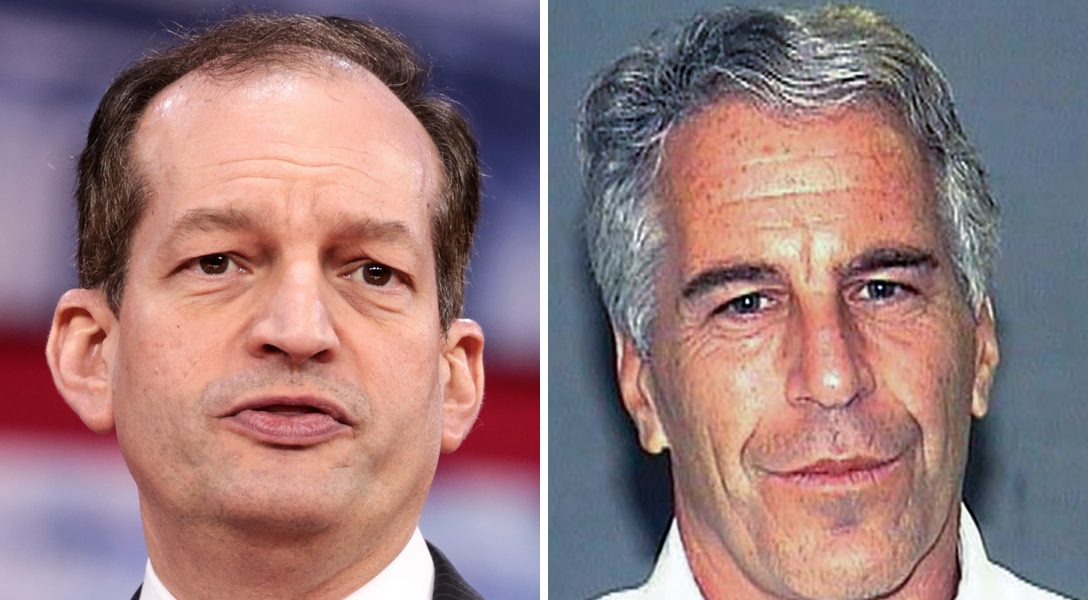 As the explosive Jeffrey Epstein saga recedes from the spotlight, the gap between what one reads in traditional news accounts and what is floating around in the ether grows.

The unspoken question is: Was the extraordinary tolerance accorded to Jeffrey Epstein for years, even after his nefarious activities were known, deliberate?

Specifically, was he allowed to exploit vulnerable minors to enable intelligence agencies to blackmail world leaders for what they did to those girls?

It sounds too far-fetched. But the government’s own top justice figure reportedly alluded to exactly that.

When Alexander Acosta was being considered for the position of secretary of labor, Donald Trump’s transition team was concerned about the fact that Acosta, as US attorney for southern Florida, made the secret non-prosecution plea deal back in 2008 with Epstein’s attorneys. Would it not cause problems at confirmation hearings?

Acosta reportedly explained that he’d cut the deal with Epstein’s attorneys because he had “been told” to back off, that Epstein was above his pay grade: “I was told Epstein ‘belonged to intelligence’ and to leave it alone.”

The only source for this bewildering, explosive comment is Vicky Ward of the Daily Beast and formerly of Vanity Fair, who said she heard this from a former senior White House official. (Ward has said that she was prepared years ago to write about Epstein’s crimes, but that Vanity Fair declined to publish her report.)

Acosta could not be reached for comment last week about his alleged quote, and he was evasive when asked by a reporter in July whether he was aware at any point that Epstein was an intelligence asset.

“There has been reporting to that effect,” he said. “I would hesitate to take this reporting as fact.”

But there is intriguing evidence elsewhere. In a recent interview with NBC’s Dateline, former Palm Beach Police Chief Michael Reiter described what happened as the police spent months quietly gathering and meticulously verifying evidence of what Epstein had been up to.

As the investigation wore on, Reiter told NBC, odd things began to happen. When detectives armed with a search warrant entered his home with a video camera, what they found made them suspect he had been tipped off.

“The place had been cleaned up,” Reiter said. A computer that contained all of the home’s surveillance footage was gone, “and all the wires were left hanging there.”

After six months of investigation, Reiter said, local police noticed a shift in attitude by the state prosecutors. They suddenly seemed dismissive of the case, telling Reiter that the witnesses were not credible. And they hindered their efforts by refusing to approve the use of critical investigative techniques.

Then, Reiter said, the investigation took another sinister turn. Epstein’s defense team seemed to know details about the probe before they were made public.

“We believed that the content of our probable cause affidavit eventually, sometime after we presented it to the state attorney’s office, ended up with the defense attorneys,” Reiter said. Because minute details that nobody else knew that were in those documents were being refuted and contrary information provided by the defense.”

Reiter was so frustrated that he took the unusual step of asking the state attorney, Barry Krischer, to remove himself from the case, citing the office’s “highly unusual” treatment of the investigation.

When that didn’t work, he turned his evidence over to the FBI. “And they said, ‘This is an easy case. This is a horrific situation. We’ll put him away for the rest of his life,’” Reiter recalled. “That’s what the US attorney, assistant US attorneys, told us as well.”

But Reiter’s renewed enthusiasm didn’t last long. In time it became clear that the federal probe was also stalling, though he believes the FBI agents working the case were personally committed to it.

Reiter met with the prosecutor in charge of the case, US Attorney Alex Acosta, whom Donald Trump would later name labor secretary. The conversation, Reiter said, did not get off to a promising start.

“He basically said in a very measured manner that the defense in this case has successfully delayed and frustrated their investigation and their prosecution of the case,” Reiter told NBC.

“I left that meeting thinking, ‘This guy hopefully is going to do his job,’” Reiter said.

It didn’t turn out the way Reiter had hoped. In 2007, Acosta decided not to charge Epstein in federal court. Instead, he sent the case back to local prosecutors.

The federal prosecution of Epstein for running a sex trafficking operation involving young girls ended on August 10, when Epstein was found dead in his New York City jail cell. The official story is that he committed suicide. But many people, including the victims of Epstein and his co-conspirators, suspect foul play.

These victims say they were recruited as minors to have sex with Epstein and his guests, including prominent American politicians, business executives, and world leaders. For years, they have sought justice. And they have good reason to suspect that their government has been lying to them in order to protect the rich and powerful. Victims of Jeffrey Epstein, from left, Sarah Ransome, Virginia Roberts Giuffre, and Marijke Chartouni find support in each other after having met at an emotional court hearing for victims of Epstein on August 27, 2019. Photo credit: © TNS via ZUMA Wire

The victims had already been deceived once by the federal government. That’s when the FBI took the case from Palm Beach Police, as described above by Police Chief Reiter, ostensibly to ensure that Epstein would not receive special treatment because of his wealth and status in the Palm Beach community.

At that time many victims came forward and cooperated with the federal investigation. In the end, the FBI identified dozens of credible victims, and prosecutors prepared a 53-page child-sex-trafficking indictment that carried a potential punishment of life in prison.

Then, in 2008, the victims were betrayed a second time, when Acosta entered into a secret and unprecedented agreement not to prosecute Epstein or any of his alleged co-conspirators.

The victims, many of whom were too young to consent at the time of the abuse, had a right to object to the agreement. But they were illegally cut out of the deal, a judge has ruled. Acosta’s office sealed the agreement with the court and misled the victims to believe that a federal prosecution of Epstein and his co-conspirators was still a possibility.

Acosta has given conflicting statements about the highly unusual and illegal deal he cut with Epstein’s lawyers. As mentioned above, he said he had “been told” to back off, according to one media account.

But when questioned in public about the Epstein deal, Acosta sang a different tune. In July of this year, he said he believed it was a good agreement based on the evidence he had in 2008 and that “new evidence and additional testimony … offers an important opportunity to more fully bring him to justice.”

Acosta’s July public statement is plainly a lie. In fact, the 2019 indictment mirrors the charges that federal prosecutors prepared in 2008 and then shelved; it alleges sex trafficking of girls between 2002 and 2005.

The 2019 case against Epstein actually arose out of investigative reporting by Julie K. Brown of the Miami Herald. Brown identified about 80 women who say they were molested or otherwise sexually abused by Epstein. Brown also told the story of the extraordinary non-prosecution agreement that was kept under seal and secret from the victims, contrary to federal law.

Embarrassed by the stories in the Herald, the feds sprang into action. Federal agents arrested Epstein on July 6 as his private jet landed at Teterboro (NJ) Airport near Manhattan, and they searched his town house. In court, federal prosecutors argued that Epstein was too much of a flight risk to be released on bond and must be detained at the Metropolitan Correctional Center in Manhattan, even though the feds had allowed Epstein to walk away from the same charges back in 2008. Two months after being denied bail on the new indictment, Epstein was found dead in his cell.

Despite Acosta’s conflicting stories and his transparently phony public statement, no one in the mainstream press or Congress has investigated the role played by US intelligence agencies in the Epstein case.

It appears that Democrats were initially willing to attack Acosta as a way to embarrass Trump. But apparently, once they realized that digging too deep would also embarrass their friends at intelligence — including the former agents who now work as analysts on cable TV promoting the story that Russia stole the election from Hillary Clinton — they decided to back off.

One reason foul play should be suspected is that any criminal trial of Epstein or his co-conspirators would have been highly problematic for the federal government:

Epstein’s lawyers would have been obliged to explore whether Epstein believed that government officials with actual authority sanctioned his crimes because he was providing them with sexual blackmail material on targeted leaders.

In other words, the government might have to reveal in court that Epstein belonged to intelligence.

This is called the “reliance on public authority defense.” It typically arises in drug cases where the defendant argues he was working as a confidential source for the Drug Enforcement Administration and therefore believed he was authorized to sell drugs.

Under the Constitution, the government is required to provide defense attorneys with all exculpatory evidence that could support any potential defense. Failure to do so can result in harsh sanctions against the prosecutors and even dismissal of the charges, as occurred recently in the federal prosecution of former Alaska Senator Ted Stevens (R).

A public criminal trial would have made it very hard to cover up Epstein’s relationship to intelligence agencies. These are the agencies that tell US presidents which countries to bomb, what leaders to depose, and which terrorists to assassinate by drone.

Many will recall the damage done to the credibility of the FBI when it was revealed that convicted mob boss Whitey Bulger — who died in a West Virginia federal prison last October — was committing extortion and murder while working as an FBI informant.

The Epstein scandal would be far worse for government officials, because it potentially involves exploiting minors to obtain dirt on world leaders.

Such a scandal would likely lead to major reforms and oversight of US intelligence, similar to what we saw in the wake of Watergate in the 1970s, with the Church Committee investigation of the CIA, FBI, IRS, and NSA.

And it’s the job of the press, and informed citizens, to keep talking about the case until we get truthful information about Epstein and about all his co-conspirators, including the ones allegedly working with US intelligence.

Leonard C. Goodman is a Chicago criminal defense attorney and co-owner of the Chicago Reader, in which a version of this article appeared.