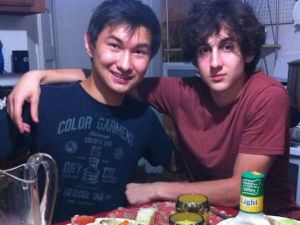 On January 30, U.S. Attorney General Eric Holder announced that the federal government would seek the death penalty against Dzhokhar Tsarnaev, the Boston Marathon bombing suspect. The media by and large did not seem to find the move worth scrutinizing.

At WhoWhatWhy, we disagree.  Since the first week following the tragedy, we’ve been raising issues about the way in which a story riddled with improbabilities, anomalies and question marks (see, for example, this, this, this, and this.) was turned quickly into a “solved crime” and a done deal—with nary a question about whether a government that has lied to the American people time and again over the years could possibly be up to something.

One thing we pointed out: We ought to be wary of claims that the brothers should be given the ubiquitous moniker of “lone wolves”—even if it is proven that they planted the bombs. This is especially true, given the confirmed pre-Marathon interactions between the Tsarnaev family and the federal government (including contacts with the FBI), an uncle tied to the CIA, Russian intelligence interest, complaints from the parents that their children were set up, and more.

We also noted how the only people who could shed light on what actually happened were being silenced, by fate or design. First, Tamerlan Tsarnaev died in a hail of gunfire. Then his brother Dzhokhar was nearly killed in a massive strafing of the boat in which he was hiding, unarmed. Then a friend of Tamerlan’s, Ibragim Todashev, was killed in a still-unexplained shooting while unarmed and in FBI custody. Then Todashev’s girlfriend and friends were told to stop talking about what had happened or be deported, and then harassed, and, in at least her case, actually deported.

The bottom line is that the official story put out through leaks to friendly media during the early hours and days after the bombing has become the unquestioned account, with no apparent serious and open-minded investigation having followed, as best as we can tell. Legal authorities have blocked public disclosure of documents that normally should see the light of day.

This leaves only Dzhokhar Tsarnaev to tell us his story and that of his brother and this remarkable set of events, one of the most bizarre, profound, and consequential episodes in recent American history, and the biggest “terrorist” incident since September 11, more than a decade before.

But will Dzhokhar ever get to tell his story? The government’s announcement that it is seeking the death penalty suggests that it wishes to bury the matter—figuratively, if not literally.

Dzhokhar’s options for avoiding the death penalty are to go on trial and try to beat the collective might of the US security establishment and predetermined public opinion or to simply admit guilt and plea bargain for a lesser punishment.  We wonder if he will ever be allowed to testify. Even if the death penalty strategy leads to a guilty plea on a lesser charge, Tsarnaev will most likely never be released from prison, and could be put into isolation where he can never tell his story—as has been done with the “American Taliban” John Lindh. This treatment is usually justified in such situations as necessary to either “protect” the prisoner or to prevent him from communicating with “other” terrorists—although the latter would be a stretch in the case of Tsarnaev, who is being presented as essentially “acting alone” with only his dead brother as a collaborator.

Even if he does testify, would it be a matter of dutifully confirming the official narrative in return for a lesser punishment?

The government holds all the cards, and so is unlikely to lose in any case. But its advantageous position is further enhanced by the nature of juries in capital cases. They are pre-screened so that all members are on record as being willing to vote for the death penalty under the right circumstances. Those citizens who believe the death penalty should never or rarely be used–or who worry aloud about the long tradition of wrongful convictions—are excluded from the start. The jurors therefore tend to be politically conservative, people who believe the testimony of law enforcement officials, who have an antipathy towards the notion of “innocent until proven guilty,” and who generally favor the prosecution at trial.

The only right thing, for the American people and for defendants in our system of jurisprudence, is a real trial, presented to a truly impartial jury of Tsarnaev’s peers, with the defense given every opportunity to tell an alternative story. But the federal government seems determined not to allow that to happen. Thus, the ploy with “death penalty or silence”.

As for Obama, his general position on the death penalty has “evolved” over the years since 1996, when he declared his unilateral opposition to it. He became more sympathetic to the method as his political star rose.

But as we have noted, some things are too big for mere mortals. And, given the indications that a massive cover-up of some kind is afoot yet again, it is clear that this is one of those situations.

0 responses to “Does US “Death Sentence” in Boston Case Equal Silence?”