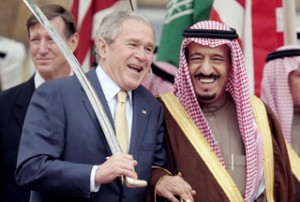 President Obama is apparently thinking about his presidential library. So now might be a good time to ponder whether anyone will want to visit it.

If he cared about revivifying his brief reputation as a good-guy outsider ready to shine light on the hidden recesses of our governing apparatus (remember his election-night victory speech that brought tears and rare hope to America?), Obama could certainly start at this late date by taking a stand for transparency.

Here’s how: Two Congressmen, a Democrat and a Republican, are asking Obama to declassify the congressional report on 9/11, which the Bush administration heavily redacted.

The two members of the House of Representatives have read the blacked-out portions, including 28 totally blank pages that deal largely with Saudi government ties to the alleged 9/11 hijackers.

This is apparently major connect-the-dots stuff—much more significant than what one may remember from Michael Moore’s film Fahrenheit 911, about Saudi royals and other Saudis studying and living in the US, who were allowed to go home without being interviewed in the aftermath of the attacks. This is about actual financial and logistical support of terrorism against the United States—by its ally, the Saudi government.

As a Hoover Institution media scholar wrote in the New York Post (normally no bastion of deep investigative inquiry):

The Saudis deny any role in 9/11, but the CIA in one memo reportedly found “incontrovertible evidence” that Saudi government officials — not just wealthy Saudi hardliners, but high-level diplomats and intelligence officers employed by the kingdom — helped the hijackers both financially and logistically. The intelligence files cited in the report directly implicate the Saudi embassy in Washington and consulate in Los Angeles in the attacks, making 9/11 not just an act of terrorism, but an act of war.

The two outspoken Representatives, Walter Jones (R-NC) and Stephen Lynch (D-Mass) would be violating federal law if they offered any specifics about what they know, or even named any countries mentioned—but did say they were  “absolutely shocked” by revelations of foreign state involvement in the attacks. Now, they want a resolution requesting Obama declassify the entire document.

If the media were to do its job and create the kind of wall-to-wall coverage it bestows upon, say, inter-spousal murder trials, Obama might feel he had to release the full 9/11 report. He’d have to concede there is a public right to know, or at least explain in detail why he doesn’t think so. Either way, there would be major fireworks. But we’re not betting on either the president or the media doing the right thing.

Mainstream Media: out to lunch, so far

How much publicity is this enormously significant story getting? Very, very little. A search of the Nexis-Lexis database turned up just 13 articles or transcripts. One was a very short, cautious piece from the Boston Globe. One was a transcript of TV commentator Lou Dobbs on Fox News. All of the others were specialty or ideological publications or blogs—Investor’s Business Daily, the Blaze, Prairie Pundit, Right Wing News, etc. (CNN’s Piers Morgan did interview Rep. Lynch). Nothing showed up from the New York Times, Washington Post, Politico, MSNBC or the broadcast networks.

That’s a remarkable oversight, given that the media did cover similar concerns expressed by former senators Bob Kerrey and Bob Graham almost two years ago. In an affidavit for a lawsuit by the families of 9/11 victims, Graham, head of the joint 2002 congressional 9/11 inquiry, said, “I am convinced that there was a direct line between at least some of the terrorists who carried out the September 11th attacks and the government of Saudi Arabia.” Kerrey, who served on the non-congressional 9/11 Commission, said in his own affidavit, “Evidence relating to the plausible involvement of possible Saudi government agents in the September 11th attacks has never been fully pursued.”

But two House members, one a Democrat, one a Republican, explicitly calling for the President to make the full report available? That’s certainly news.

What Will Obama Do?

If President Obama does declassify the records, that would be surprising, if not outright shocking.

Although he has belatedly (and under heavy pressure from his base) begun to shift more toward at least the rhetoric of openness, Obama failed to stand up for release of still-classified documents related to the John F. Kennedy assassination (a half century after that tragedy), and he has presided over myriad actions that take us further than ever from transparency. Meanwhile, the media has all but abdicated its responsibility to hold the administration’s feet to the fire on these and related matters.

At WhoWhatWhy, we understand how hard it is to get this kind of material into the hands of the American people. Our groundbreaking reporting on ties between prominent and powerful Saudis and the men said to have been on the planes attacking on September 11 (via a house in Sarasota, Florida) was almost entirely ignored by the establishment media, including many so-called “alternative” and “progressive” outlets, though it has nonetheless spread widely thanks to the Internet and social media. Even the above-mentioned New York Post only now has acknowledged our reporting on the Saudi-Sarasota connection, without mentioning our name or linking to us.

No matter. The significance is that others have come forward to ask tough questions about the daunting reach and self-protective reflexes of our government’s ever-expanding “secret sector.” With a related meta-issue—NSA surveillance—odd bedfellows like “leftie” Glenn Greenwald and “rightie” Larry Klayman (with a Bush appointed judge ruling in his favor) are going at the surveillance state simultaneously, mightily aided by former intelligence analyst Edward Snowden.

Whatever one thinks of the 9/11 story—and one needn’t buy the more extreme theories to be open to examining new, documented facts—there’s clearly more to that trauma than we have been allowed to know; and we suspect there are many more establishment figures with a hunger for the truth. And once more “respectable” Washington insiders like House (and Senate) members start saying shocking things—well, that’s a man-bites-dog story few news organizations can turn down.

As for the executive branch, representatives of the State Department, Department of Justice and FBI have repeatedly denied knowing anything about the Saudi angle. If those documents are ever declassified, the denials themselves—and those issuing those denials—should also be news.