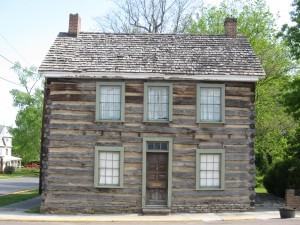 No, this house in Romney, WV, doesn’t tell us anything about America’s future, either.

Maybe it’s just me, but I’m feeling like I’ve read way too many articles about Mitt Romney without learning anything really useful. And that’s not just a reason to be annoyed. It’s a reason to be concerned about what this tells us about how our country actually works.

Here’s the latest example, from the New York Times:

In Real Estate Deal, Romney Made His Loss a Couple’s Gain

Look closely and it is there, sandwiched between Goldman Sachs Hedge Fund Partners II and D3 Family Bulldog Fund: the mortgage on Timothy and Betty Stamps’s modest home on Gentle Bend Drive here.

Nearly lost among the blizzard of hedge funds, thoroughbred horses and other gold-plated investments in Mitt Romney’s personal financial disclosures, the interest from the $50,500 mortgage is loose change to Mr. Romney, whose net worth has been estimated at close to a quarter-billion dollars.

Yet for the Stampses, who have been writing $600 monthly checks to “Willard M. Romney” for 15 years, the money they borrowed from him to buy their home in 1997 was life-changing.

The mortgage is the last vestige of a troubled, and previously unreported, investment by Mr. Romney in Texas real estate in 1982, before he struck it rich as the wunderkind of Bain Capital. And while the Stampses’ happy ending is a counterpoint to the image, seized upon by political opponents, of Mr. Romney as a cold, calculating financier, the episode also offers an early illustration of his appetite for deals promising low risk and high return. ….

That’s just the beginning, and it sounds intriguing, so you read on, waiting for insight. And then you discover there is none.

We really learn nothing new about Romney, and certainly nothing of significance. Even worse, we’re implicitly told we need to wade through these mind-numbing details in order to make intelligent choices for our democracy.

I’ll save you some time by supplying a short-hand version of the article: way, way back, in 1982, Mitt got into a real estate investment with a bunch of very unglamorous homes. He hung on to some of them for years and years, and was still collecting rent on at least one as late as 1997, before selling the home to the couple living in it. The tenants had almost no contact with him—but he did not come and torch their home, steal their baby, or downsize them. He also didn’t make money on the investment.

What this article does is (a) create the false impression that the details of Romney’s investment tells us a lot about him; (b) imply that the choices he made might tell us something about what is in store for the country; (c) tacitly suggest that presidents actually have tremendous freedom to innovate or do what they wish while in office—as if the country were a haberdashery or a peanut farm (or an investment firm).

Reading article after article about Mitt’s frugality, his wife’s horse riding, or even his Cayman Bank accounts gives us a sense that we have come to know this man, and therefore can make an intelligent decision of who we—and the country—would most like to live with for the next four (or eight) years.

But it’s been a very long time since the personal manner or even personal history of a president told us what would happen to the country if he was elected. Indeed, such biographical tidbits divert us from the real story of democracy today—the relatively small number of rich people and institutions which ensure that, no matter who is elected, the range of options on the table are distressingly narrow.

The only thing we should be looking at is: who’s really driving Romney’s train? Who, if anyone, has a real vision of what his presidency can or should be? Pretty clearly, that’s not Mitt. He’s another ambitious and lucky guy who wants to be president because he can be.

What we need is deeper digs that might predict what is in store for this country. After all, how useful was it to read all about Obama’s days as a community organizer, his basketball games or his minister—did that help us imagine that he would hire an establishment perennial like Larry Summers to help set economic policy, or go right along with a Bush-era plan to remove uncooperative leaders in one Middle Eastern country after another?

Of course, there are substantive differences between Obama and Romney, but they have a lot more to do with which influential constituencies must be satisfied than with Mitt going to the same barber for decades, or with Obama’s international background growing up.

We need less of the People Magazine-style focus on presidential candidates as fascinating (or frustrating) individuals of interest—and more study of the institutions that are always in the picture, shaping policy and making sure that no president deviates very much on the big issues of money and war.

One response to “Meaningless and Misleading Campaign Reportage: Landlord Romney”