Former AUI-S faculty member Mark Grueter recalls Mitchell peppering his in-class exchanges with biblical quotations, although in an interview with WhoWhatWhy, Mitchell emphatically disputed this. “I am involved in mainline discussions in political science and with respect to what I’m doing here, I do no proselytizing. It does not affect my work. I’m a little surprised you’re raising this and I would hope this is not something that becomes a central point in your story.” [Grueter, internal correspondence shows, was fired over his criticism of the university’s administration—but points out that just a few weeks before his termination, he had been offered a two-year contract extension and a raise based on his teaching performance.]

To be sure, the stated mission of the American University of Iraq is secular—and lofty. Its goal is to “promote the development and prosperity of Iraq through the careful study of modern commerce, economics, business and public administration, and to lead the transformation of Iraq into a free and democratic society, through an understanding of the ideals of liberty and democracy.”

The devil, of course, is in the details. One student we spoke with expressed resentment at being force-fed a kind of colonialist pap via the principal textbook in his American history survey class. “This book talks about Indians not very friendly[sic], like a bad people.” Seeking to recall the title and author, he went and pulled the book off his shelf, and read aloud: The Last Best Hope, by William J. Bennett—John Agresto’s mentor and perhaps the leading theorist of the neoconservative cultural movement that seeks to defend traditional interpretations of the American adventure. Bennett himself characterized his book as an attempt to make Americans feel good about their history.

The student, a bright Kurd with moderate mastery of spoken English, noted: “When William J. Bennett talks about the Indians he talks about them that they were hostile, they didn’t know anything, and all they learned how to live and how to behave was from the Europeans. This book is biased [toward] the Americans but that’s what we study.”

The student says that he was so troubled by the characterizations in the book that he turned to the Internet for other material. He said that many of his classmates, less motivated, did not read the book or seek out other material, but simply took notes on what the teacher—a Bennett sympathizer—said and then repeated it back for exams.

Someone seems to have considered this kind of work a high priority, for AUI-S got its academic accreditation in what is surely one of the fastest times on record. It usually takes years for a college to get up and running, and to graduate enough students to meet the criteria set by reputable accreditation institutions. For example, although the American University of Beirut has been registered and recognized by the New York State Education Department since 1863, it only received its accreditation in June 2004—following a lengthy process and more than a century after it had been established. 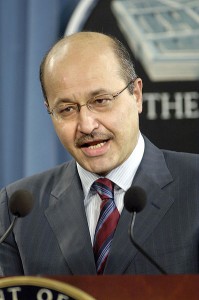 Barham Salih, Prime Minister of Kurdistan, raised $55 million for the university. Salih led the Kurdish lobbying effort in Washington, pushing for the ouster of Saddam.

By comparison, according to its own website, the American University of Iraq received a five-year unconditional accreditation in June 2010, less than three years after opening its doors. Under even ideal circumstances, this would have been unusually fast. But AUI-S does not enjoy ideal circumstances. First of all, the university is still under construction. Eventually, administrators hope to enroll 5,000 students. For now, largely on account of interminable construction delays, the student population, eventually envisioned at 5,000, has hovered around 650-750.

Meanwhile, the faculty, numbering around 40 in the past year, are overwhelmingly from the West; the vast majority do not speak Arabic. The students are all Iraqis, with the great majority being non-Arab Kurds, a mix of the poor and the more privileged. Generally, they arrive on campus with an English comprehension so low that few could take college level courses in English. The majority must therefore go through an English preparatory program which can last several years. This means that it takes longer for the students to pass enough required courses to earn their degrees, which is another reason why the university’s rapid accreditation seems odd.

The answer to the mystery seems to bear the name of Cheney. The body that gave AUI-S its seal of approval is the American Academy for Liberal Education, co-founded by Lynne Cheney, wife of the former vice president, during her tenure as humanities czar during George W. Bush’s father’s administration. The AALE specializes in accrediting conservative and religious colleges, and has received funding from the Olin Foundation, a leading supporter of the Right Wing effort to reshape American educational and cultural institutions. That’s the same Olin Foundation that funded chancellor Joshua Mitchell’s work before he came to AUI-S. 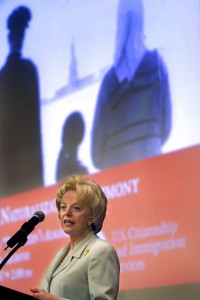 The body that gave AUI-S its seal of approval is the American Academy for Liberal Education, co-founded by Lynne Cheney, wife of the former vice president

AALE’s own credibility has been questioned before, even during the Bush-Cheney presidency. According to a 2008 ruling by Margaret Spelling, George W. Bush’s Secretary of Education, AALE had been “cited consistently since 2001 for either not having clear standards with respect to measuring student outcomes or not collecting and reviewing data on how institutions it accredits measure student outcomes.”

As with the invasion itself, a gap seems to have existed between the lofty, shining rhetoric and a far more tawdry reality. In a July 2008 article for the conservative magazine National Review, Agresto compared Americans working in Iraq to Asahel Grant, the early 19th century Christian missionary and doctor who lived and died in Iraqi Kurdistan. “Like Asahel Grant,” Agresto claimed, “none of them [people working in Iraq] is here for money or oil or politics or honor.” John Dolan, a former AUI-S professor of English Composition and Literature, begs to differ. “We went to Iraq to make money,” he says about his wife and himself, “And once we got to know our colleagues at AUI-S, we found that nearly all the faculty was there for the same reason…to make money.” Dolan describes one particularly incompetent history teacher who, after having received his first monthly paycheck, loudly announced, “Here I am walking along with $15,000 cash in my pocket!”

Other professors say they took jobs there thinking they’d be teaching at a well-run institution, only to find themselves pressured to push unprepared students into undergraduate programs by administrators worried about the university’s credibility. Some faculty and students claim to be afraid to speak over the phone, even off the record. We heard of alleged attempts to prevent former staffers from leaving Iraq, and several said they feared that if they talked they would not receive their salaries for their final months of work.

There are 40 comments Our Comment Policy: Keep it civilized, keep it relevant, keep it clear, keep it short. Please do not post links or promotional material. We reserve the right to edit and to delete comments where necessary.