Does Obama Leak More Than Others? - WhoWhatWhy
Reading Time: 3 minutes 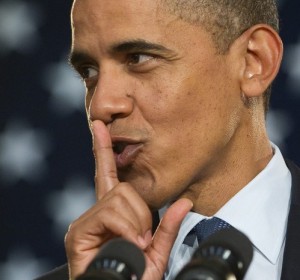 The other day, someone asked me whether I thought the Obama Administration was leaking information to the press. I had to laugh. Do they leak? Everyone leaks. It’s a staple of doing business in Washington.

The line that “Obama is a traitor because he leaks” is suddenly a refrain in this presidential campaign. Note this New York Times story:

On the eve of a trip abroad intended to burnish his qualifications to be commander in chief, Mitt Romney accused Obama administration officials on Tuesday of betraying the country by leaking national security secrets for their own political gain and failing to stand up to adversaries like China, Russia and Iran.

Mr. Romney’s address, at the Veterans of Foreign Wars convention here, was the most expansive foreign policy speech of his candidacy and opened a new and aggressive attack on President Obama on national security.

That’s a hoot. Without leaks, there would be hardly any “journalism.” Do you recall all those stories saying, “ABC News has obtained documents”, or “The New York Times source asked not to be named because of the sensitive nature of ongoing negotiations”?

The thing to remember is this: the whole business of leaking—and of using leaks in journalism—is a nasty and usually self-serving enterprise. Why? Because it is rare that the leaker is a true whistleblower, risking a job and safety for the public interest. That happens, but it is not common. Most of the time, leaks come from interested parties, making an authorized leak to serve the purposes of their bosses or their institution. It’s a variant on, say, an unnamed Romney campaign official disparaging Obama.

This process rarely benefits the public—and is made worse by the media, which often fails to make clear that the leaks are being used to gain an edge in some kind of struggle.

Also, when someone claims that a leak threatens national security, the complainant is more often than not puffing up a big nothing. Usually, all the key players already know the information, or have some sense of it, by the time it is put out to the public. And even opposing players understand that if something is being leaked, it should be taken with a grain of salt.

However, leaks can damage national security in one significant way: they can shape public opinion and force events in a direction that may not be in the true public interest.

Here’s an example of how leaks have been used, not by Obama, but against Obama:

In 2010, as Obama was preparing to pull troops out of Afghanistan, he was suddenly plagued by leaks…. from the military. They came via one of the Pentagon’s favorite and most reliable intermediaries: Bob Woodward of the Washington Post. As we explained at the time, here and here, these leaks had the net effect of preventing Obama from pulling out as many troops as he would have liked. In fact, it forced him to do the exact opposite: to actually send in more troops. Obama, bested by the leaks, could do no more than to make a smaller increase in troops than what the Pentagon was requesting.

In these leak-fests, there’s more at stake than just one-upmanship or short-term political gains. It’s about nothing less than who runs the country.

Obama seems to understand his narrow range of movement, and to be carefully picking his fights. He retained many of Bush’s top military brass, and even Bush’s Defense Secretary Robert Gates, who himself had served as a CIA director for Bush’s father. He has trod very carefully with the spy agency and has declined to aggressively investigate Bush administration wrongdoing on torture and wiretapping. Obama’s campaign rhetoric about disengaging from Iraq seems a long time ago, and the war in Afghanistan is taking on the hues of permanency.

The old boys’ network is very much in place, and it is hard at work to force Obama’s hand, a la Vietnam. Witness the leaking of Gen. Stanley McChrystal’s supposedly “confidential report” calling for escalation in Afghanistan. The leak was, not surprisingly, to the reliable Bob Woodward. The reporter was himself in Naval Intelligence shortly before he went to work at the Washington Post, where he soon built a career around leaks from the military and spy establishment. The White House was furious at the McChrystal release. But what could it do?

So when Romney and his supporters attack leaks that seem to come from the Obama team—or at least benefit Obama—they should be asked how they feel about people in the military, itself specifically sworn to protect our national security, leaking national security information.

If anyone should be “sharing” information with the public, explicitly or indirectly, it should be an elected president—not military officials trying to undermine him.

5 responses to “Does Obama Leak More Than Others?”