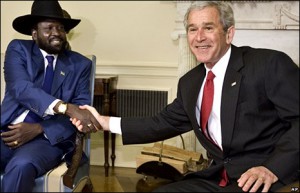 The new leader of the new South Sudan with…guess who?

The New York Times produced a nice article the other day covering Independence Day in the new country of South Sudan. It mentioned all kinds of things, from the dignitaries who attended the ceremony, the history of warring that resulted in two million deaths, the continued threat from multiple insurgencies, the religious differences that divided the South from the North of Sudan (North: Muslim, South: Christian and Animist), the hellish heat dogging the festivities. It even noted that the new president wore his signature black cowboy hat, a gift from George W. Bush, and that someone in the crowd held up a sign reading, “Thank You George Bush.”

You have to wait, kid you not, 24 paragraphs (including after the hat-tip to Bush) to get this gem—which itself was nicely nestled in the midst of other sentences:

And relations with the north are still dicey. Negotiators have yet to agree on a formula to split the revenue from the south’s oilfields, which have kept the economies of both southern and northern Sudan afloat.

The key point is buried, and then buried again, and made to sound obscure. But make no mistake about the significance. Sudan is the third-largest producer of oil in sub-Saharan Africa. Or, should we say was. Because 85 percent of that oil came from the south.

To be fair, the Times reporter was probably expected to focus on the occasion and the festivities. And did not see a way to, like oil in water, migrate the substance to the top. This does, however, point up the limitations of conventional journalism, with its emphasis on what is said, rather than what it all means. It also underlines the need for sites like WhoWhatWhy, that—pardon the expression—drill deeper.

So here’s the rub, for those who may only be paying attention to South Sudan right now, and not sure what exactly it has to do with the United States, or one White House after another: Those “freedom-lovers” in the USA who—starting under Bush—made the South Sudanese cause a priority, also managed, as a side byproduct, to wrest more oil from largely-hostile hands into friendly ones.

Further inquiry: It would be interesting to tote up the places where the US government has agitated for one side, or for freedom, which do not harbor substantial strategic assets.

Now, that would be our kind of journalism.

(For more on Sudan, oil, and the very real prospects of renewed war—explicitly over the oil, see this report from the Inter Press news service.)