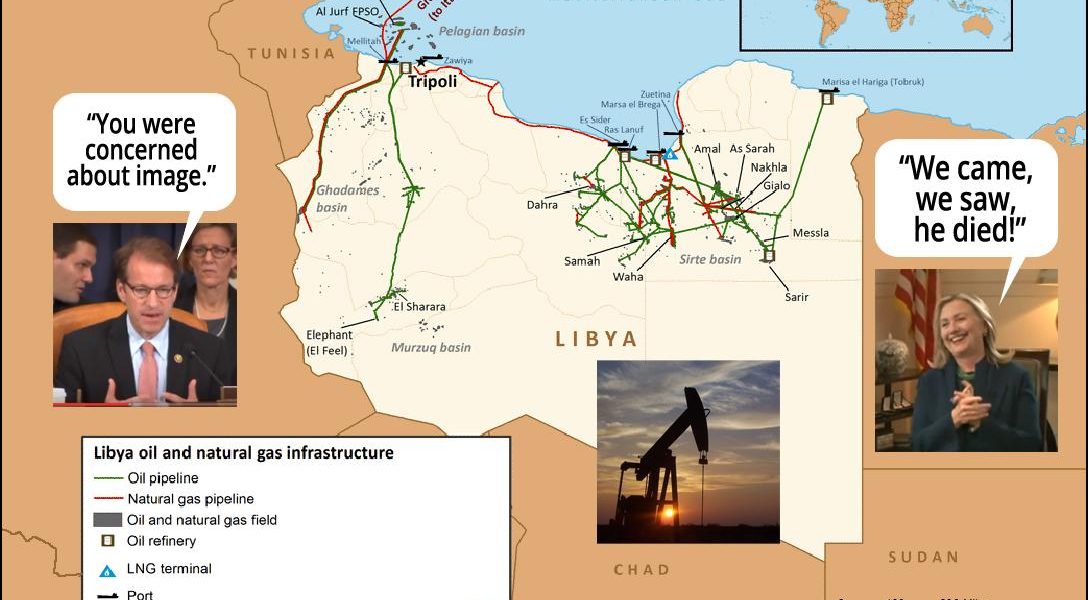 What Both Hillary and the GOP Are Covering Up About Libya

Congressional Republicans were desperate to score political points in the Benghazi saga. So desperate that they finally decided to masquerade as … peaceniks.

During the recent grilling of Hillary Clinton, the Republicans — who have rarely seen a war they didn’t like — actually criticized the former Secretary of State for ignoring the difficulty of successful regime change. (No mention was made of how well George W. Bush’s regime change has gone in Iraq.)

Further, they claimed that she had run roughshod over her own experts, who warned that US involvement in a 2011 air campaign in support of rebels would lead, at best, to new problems, and that they (the Republicans) had anticipated the chaos that marks Libya today.

This new line of attack was simply the latest in a series of attempts to damage her over Benghazi, none of which seem to have eroded confidence among those inclined to give her their vote, or even among those on the fence. It was essentially a hail mary pass, and we will see if the public blames her for the morass that is Libya today — a country where chaos and extremism now reign.

What the GOP Dares Not Ask

But, quick: What was Libya really about? If you don’t know, then you’re no different from most people, including most members of Congress — as evidenced by the debate in 2011, and by the discourse since. Seemingly missed by all: getting rid of Muammar Qaddafi was never really about protecting the lives of Libyans.

No, it was, like everything else in geopolitics — about money. Or, more precisely, the invaluable resources to be had, and about a national leader who would not play ball with those who wanted those resources. Of course, the establishment was not about to level with us, so it lied.

WhoWhatWhy was on the case from the beginning in Libya, pointing out the deceptive propaganda campaign that was unleashed to guarantee that war was inevitable.

The real questions Hillary Clinton ought to be asked — but which the Republicans cannot ask because they are as complicit as anyone — is why she pushed for Qaddafi’s ouster. And why she was apparently so comfortable with misleading the American people about the actions taken in their name.

As the US enters the thick of yet another presidential election, we urge everyone to consider just why it is that the inevitable nominees from both parties can be expected to perpetuate the same historical myths. And why whoever is elected can be counted on to commit troops, dollars and lives to still more such military adventures. Or misadventures.

To learn more, we invite you to read our original reports published when it was all unfolding. They chronicle how US officials disseminated (with media complicity) an unending stream of brazen lies designed to advance a hidden, predetermined agenda.

Here are links to a couple of those past stories (summaries edited for space):

The Libya Secret: How the West Cooked Up “People’s Uprising”

The public was told that the sole purpose of what was to be very limited bombing was to protect rebelling Libyan civilians from massive retaliation by Qaddafi. However, protecting civilians apparently didn’t generate sufficient US public support for intervention, so we started to hear about other purported justifications for going in: Qaddafi was so odious he was encouraging his soldiers to … commit mass rape! And if that wasn’t enough, he was giving them Viagra! Oh, and condoms!

You can’t make this sort of thing up. And yet that’s just what the NATO crew did — made it up.

Libya: Connect the Dots — You Get a Giant Dollar Sign

“Why Libya?” Why were the United States and its allies suddenly so worried about the rights of Libyans under the long-ruling Qaddafi? And why did the West initiate a no-fly zone, commence massive bombing runs, and virtually create, train, supply and fund a rebel army?

For an answer, we need only look to the “usual suspects” — oil companies, financial houses such as Goldman Sachs — all engaged in quintessential corporate intrigue. Just the sort that never seems to come out in … the corporate media.

And here are a few more Libya-related stories from the You-Can’t-Make-This-Up Department:

Burying the Lockerbie Bomber and the Truth

The CIA’s Man in Libya