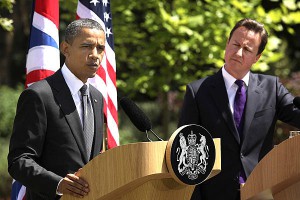 Obama calls for ‘Patience and Persistence’ in Libya

Article Summary: The why of the massive bombing of Libya continues to grow more nonsensical. Congress is baffled into paralysis, and our major media stick to the most honorable interpretation— despite evidence to the contrary.

Are you following the growing madness that is Libya policy?

We’ve been harping on this for some time, so if you’re a regular visitor to our site, you know all about this. If not, get a primer here, here and here. Last week, we reported on the bizarre insistence by the bipartisan duo of Democratic Senator John Kerry and Republican Senator John McCain that the US Congress needs to authorize US military involvement in Libya for up to a year. Their justification: unspecified but urgent “national security” concerns.

This contradicts the original claim that it was humanitarian concerns that motivated the NATO-US involvement—the need to protect Libyan civilians from the forces of Muammar Qaddafi during a supposedly spontaneous uprising. (An uprising which, as we note, was getting a whole lot of help from CIA and the like.)

On to the latest insanity:

Last Friday, the House of Representatives made an unexpected split decision that only underscores the Looney-Tunes nature of the Libyan debacle. The House rejected a resolution that would have officially authorized the involvement of US troops in Libya. But, on the other hand, it also rejected a tough attempt to restrict funding for the same Libyan adventure.

The first bill, let’s call it Legislation A, is the House version of what we previously reported was being pushed by Senators Kerry and McCain, and will be taken up by the Senate this week.

Here are key parts of Legislation A, the full wording of which you can read here:

(a) Authority- The President is authorized to continue the limited use of the United States Armed Forces in Libya, in support of United States national security policy interests, as part of the NATO mission to enforce United Nations Security Council Resolution 1973 (2011) as requested by the Transitional National Council, the Gulf Cooperation Council, and the Arab League.

(b) Expiration of Authority- The authorization for such limited use of United States Armed Forces in Libya expires one year after the date of the enactment of this joint resolution.

So the House did not go along with Kerry/McCain/Obama, and defeated the bill 123-295. (The Senate is taking up its own version this week).

But then the House voted down what we’ll call Legislation B, by 180 to 238. It would have barred funds going to support the bombing and other offensive operations, even though it was vaguely worded in such a way that the military could probably interpret at will—and would have allowed intelligence, reconnaissance, and so on.

None of the funds appropriated or otherwise available to the Department of Defense may be obligated or expended for United States Armed Forces in support of North Atlantic Treaty Organization Operation Unified Protector with respect to Libya, unless otherwise specifically authorized by law.

Bottom line—a majority in the House doesn’t want to authorize continued US operations in Libya, but neither does it want to block it outright. The top Republican in the House, Speaker John Boehner, supported what we’re calling Legislation B, but 89 of his own Republicans voted against it.

What we’re seeing is a chaotic bipartisan free-for-all, with some pro-Obama Democrats going along with whatever he wants to do, and some war-oriented Republicans abandoning partisanship and saying, “why sure, bombs away!”

The two votes highlighted the way that a decade of war has scrambled the politics of foreign policy, and left both parties deeply divided over the Libyan conflict and American warmaking in general.

Contrary to this assertion, the two parties are not just “deeply divided.” They’re terminally confused. In other words, they, like the American people, have absolutely no clear sense of what is at stake, or of why this country is involved in Libya.

Things are so bonkers that the Republicans are now a big factor in the anti-war element, and the New York Times is pro-war. In an editorial, the Times argued for Legislation A, and against Legislation B. About the House, it said

…There are two main proposals — and a clear choice to be made. We fear they are leaning in a wrongheaded and dangerous direction.

About Legislation B, it said

…the damage to this country’s credibility, and its leadership of NATO, would be enormous. Any sign that the United States is bailing out could lead others to follow.

Well, yes, that would be the idea—to encourage an end to the bombing. The Times editorial  continues:

…It is hard to view this bill as anything but a partisan play to embarrass the president.

Or, maybe, its supporters actually think the US has no business bombing the heck out of another country—or intervening for unclear or morally dubious reasons. No consideration of this by The Times:

…The one sure victor would be Libya’s strongman, Col. Muammar el-Qaddafi, who would see it as a sign that NATO’s resolve is faltering and another reason to keep brutalizing his people…We are certain if NATO had not intervened, thousands more Libyans would have been slaughtered.

You could say the same thing about other places, like, say, Syria. Or Sudan. Or….(you pick the place). Yet only Libya is invoked.

What is perhaps most intriguing here is that the Times is still buying the original raison de guerre, that this is a humanitarian mission, while Kerry, McCain and others have long moved on to something else—some unspecified urgent, “national security” interest…

The Washington Post, like The Times, is still selling this hoary myth, as in this article, which characterizes the House vote as having

. . . revealed a Congress that has been fractured by a weary decade of war in Iraq and Afghanistan.

The debate over Libya showed that some Republicans and Democrats were fixated on moral questions–what is the American responsibility to defend democracy? Others were preoccupied with fiscal ones. How should the national debt affect a foreign policy built on the idea of America “bearing any burden” for freedom?

Thus, like the New York Times, it resolutely ignores the clear statement from Kerry and McCain that the Libyan intervention is essential to American “national security” concerns.  At the end of its editorial, The Times does invoke “National Security,” but only in a very narrow and peculiar context:

Thankfully, some Senate Republicans also seem to understand the importance of the United States following through on its national security commitments.

“National security commitments”—represented as being about nothing more than willingness to go along with NATO. No indication of the underlying reasons for what is transparently—but never acknowledged” to be— an invasion to remove a foreign leader.

All to be revealed in future books, no doubt. Years from now.