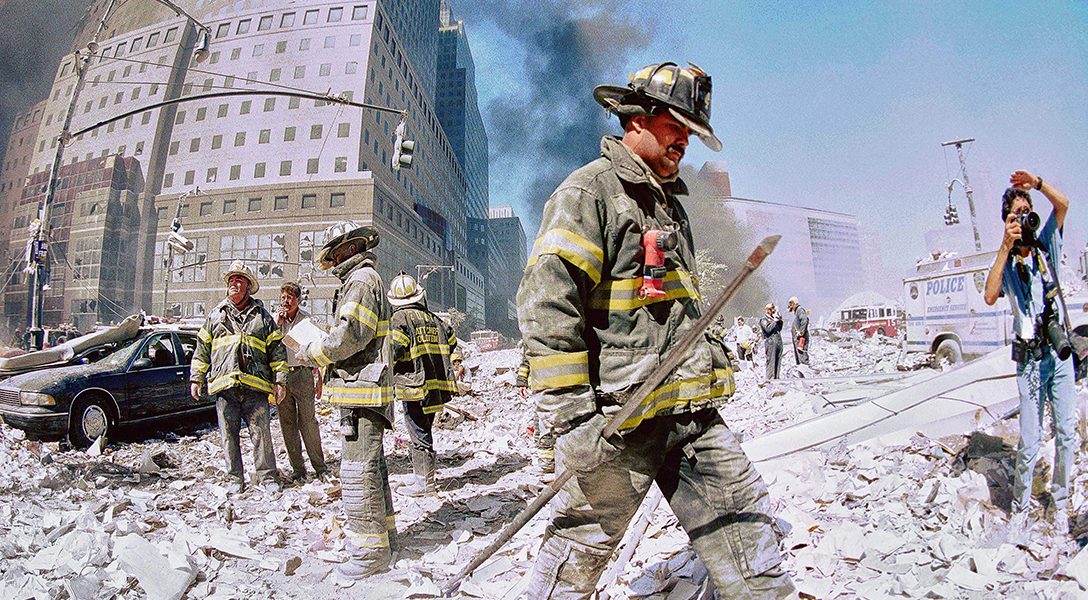 World Trade Center, New York City, about 20 minutes after the second tower fell on September 11, 2001. The second tower was attacked about forty-five minutes after the first. First responders of all types — police, fire dept., and medical personnel — converged on the scene immediately after the first attack, and were then caught in the middle when the second jet crashed into WTC. Photo credit: © Rob Schoenbaum/ZUMAPRESS.com

Another year has passed since 9/11, and it seems as though accountability for those who financed and supported the perpetrators is further from reality than ever.

While yet more evidence has surfaced this year about the people involved in covering up the crime, secrecy reigns supreme in Washington. Yelling “national security” a whole lot, which US intelligence officials and lawmakers tend to do when they don’t want classified information released for public consumption, has a funny way of locking up scandal nice and tight.

Additionally, the major news outlets rarely mention the involvement of high-ranking Saudis in the plot or the cover-up. So the anniversary has become a day of little more than patriotic memorials and sorrow, while deferred justice is left to what remains of the court of public opinion.

But there is precious little progress on that front.

Some lawmakers from both parties recently introduced dual resolutions in the House and Senate demanding the full declassification of US government documents on 9/11. No one expects congressional action anytime soon.

A new book out this summer, The Watchdogs Didn’t Bark: The CIA, NSA, and the Crimes of the War on Terror, crystallizes the “Saudi did it, we let them” narrative in enraging detail. It hasn’t sniffed the top 100 on the Amazon best seller list.

We know that 15 of the 19 hijackers hailed from the Kingdom of Saudi Arabia. We know that, regardless of their motive, some high-ranking members of the Saudi government aided the attackers and their support network just before the attacks. We know that a vast PR campaign has been undertaken by lobbyists and spokesmen for the Saudi royal family to block any litigation against or even inquiry into Saudi nationals for their alleged culpability.

The “known knowns” are vast. However, the effect they have anymore on the social consciousness of average Americans regarding the day that “changed everything?” <crickets>.

If you’re one of the few who were outraged when you first became aware of Saudi culpability in 9/11, you’ve likely stayed true to that response as more evidence has come to light. If you’re among the masses unfazed by such information because it’s all too big, too dangerous, or too inconvenient, no amount of unclassified document releases showing who was responsible will change your view.

After all, the Kingdom produces one-eighth of the world’s sweet crude oil, holds $120 billion in US Treasury debt, maintains extensive business arrangements with US executives, and shares our capitalist disdain of Iran. It also knows where the “bodies are buried” in the region as a direct result of US weaponry, from Syria to Iraq to Yemen. We cannot risk angering the Kingdom. Right?

A conspiracy of some kind was obviously carried to its fruition on 9/11. Evidence strongly suggests that a conspiracy involving at least some parts of the government of the United States was then undertaken to cover it all up. But the 17-year process of going numb to the perpetual obfuscating, obscuring, deflecting, and outlasting of any real, honest, critical analysis of what happened on September 11, 2001, has not been a conspiracy. It’s merely the human condition.

A favorite author once put it best:

“When a flock of birds suddenly changes direction, simultaneously and uniformly, is it a conspiracy? Or is it just an instant recognition by every member of the flock where their collective interests lie?”

We apparently don’t want to acknowledge everybody who was behind 9/11. When the truth is too painful, it’s only human, if hardly admirable, to avert one’s eyes. But it’s also human to open your eyes when the cost of blind ignorance becomes too great.