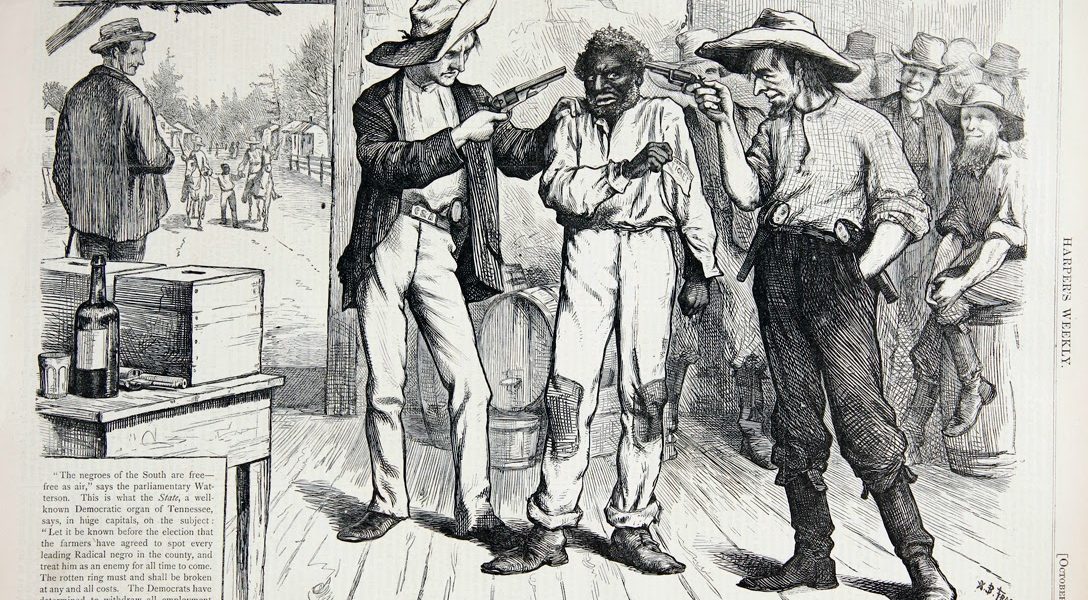 'Of Course He Wants To Vote The Democratic Ticket,' published in Harper's Weekly in October 1876. Photo credit: Frost / Wikimedia

Black History Week: When We Pause to Mourn Centuries of Suffering

February is Black History Month. But it was started, in 1926, as Black History Week, by a remarkable man named Carter G. Woodson, the “father of Black history.”

Woodson chose this week because it encompasses the birthdays of both a white man and a black man: President Abraham Lincoln (February 12) who paved the way for abolishing slavery with his Emancipation Proclamation, and Frederick Douglass (February 14), a great statesman, orator, and abolitionist.

Woodson was born in 1875 to former slaves. He worked in the coal mines of West Virginia before going on to earn a bachelor’s and a master’s degree, and won a scholarship to Harvard University where he obtained a PhD. He became many things: a teacher, a publisher of various journals — he founded The Journal of Negro History — and the author of more than a dozen books. He died April 3, 1950, of a heart attack, just as the civil rights era was beginning.

Woodson wanted to reach both blacks and whites with his writings, and believed disseminating black history would advance race relations.

Below, we present a small collection of stories that show how bad race relations were — and still are. The Day Americans Bombed an American City From the Air

“Black Wall Street” was a prospering African-American neighborhood In Tulsa, OK that went up in flames almost 99 years ago. Incredibly, most Americans have never heard of the shameful events of June 1, 1921, when whites firebombed the neighborhood from the air and an estimated 300 African-Americans were murdered. On a hot day in Harlem, an argument started over a dollar bill. It ended up in a riot costing the lives of six people (five shot by police), 495 injured, over 500 arrested, and an estimated five million dollars ($75 million in 2018 dollars) in damages to property — white-owned property. On August 2, the riot was over thanks to the work of 6,600 city, military, and civil police officers; 8,000 state guardsmen; and 1,500 civilian volunteers. The details over how it started vary, but maybe they don’t matter so much. When you look at the big picture (see further below), you know that almost anything might have ignited that riot. The year is 1974 and the signs hanging from the windows of the south Boston buildings read “N***er Go Home.” In the streets below, crowds of rage-filled white residents scream racist abuse and hurl bricks, as terrified African American pupils cower in their talismanic yellow school buses. It was the beginning of the era of desegregation busing in the US. The shooting of Michael Brown sparked protests and rallies in Ferguson and beyond, including this one hosted by the Montgomery County Civil Rights Coalition in Silver Spring, Maryland. Photo Credits: Steven Melkisethian/Flickr

The Ferguson Report, Part 1: Breathing While Black, and Other Offenses

It has been said that African-Americans are often arrested for “driving while black.” In fact, African-Americans seem to be arrested for walking, talking — or just breathing — while black. Here we present excerpts from The Ferguson Report, an astonishing catalog of grinding daily harassments, humiliations — and worse — by a police department intent on keeping a people “in their place” while earning revenue for the city by writing as many tickets as possible. Magnificent, but shocking, works of art — drawings, lithographs, woodcuts, paintings and stark photographs, many of them rare, depicting in sharp detail, the many manifestations of racism. An unforgettable look at the kind of hatred, atrocities, and soul-searing humiliations that spurred King into action, kindling his dream of a better life for everyone. An Evening in the Old South, a Memoir

I remember my gnarly old uncles sitting around in the parlor smoking and drinking in front of the gun case, dropping ash onto the Persian rug … their red eyes permanently fixed on the distant past. At night, you could see in those eyes the flickering reflection of Richmond burning. And I remember sitting on the back porch … listening to crickets and tree frogs, and tales of ancestors… the country doctor who went for a walk by the ocean and came upon a scene of horror…  Slaves being thrown into the sea and held down … They had smallpox and were no longer of use … But this doctor saved those that he could, made them well … and then put them to work.