Seventy-five years ago in Harlem, an argument started over a dollar bill. It ended up in a riot costing the lives of six people (five shot by police), 495 injured, over 500 arrested, and an estimated five million dollars ($75 million in 2018 dollars) in damages to property — white-owned property. On August 2, the riot was over thanks to the work of 6,600 city, military, and civil police officers; 8,000 state guardsmen; and 1,500 civilian volunteers.

The details over how it started vary, but maybe they don’t matter so much. When you look at the big picture (see further below), you know that almost anything might have ignited that riot.

On the night of August 1, 1943, a black woman named Marjorie Polite got into an argument with a porter in the lobby of a Harlem hotel. She was unhappy with the hotel and wanted a refund for everything, including the dollar tip she had given a porter. The porter claimed he never received that tip. The argument got loud and rookie patrolman James Collins, who heard them quarreling, grabbed the woman, and restrained her for “disorderly conduct.” She cried out to the other guests:

Protect me from this white man!

Private Robert Bandy — a member of the 730th Military Police Battalion in Jersey City — was in the lobby with his mother at the time. According to historian Nat Brandt,

Bandy started to grapple with Collins, to loosen his grip on Polite. His mother joined him. In the scuffle, Bandy grabbed the policeman’s nightstick and struck Collins on the head, knocking him to the ground. Bandy started to bolt, but Collins … pull[ed] his service revolver from its holster and fired at the retreating soldier.

As you might expect, Bandy’s own account of the incident is different. According to historian Dominic J. Capeci,

Bandy contended [sic] that he protested when Collins pushed Miss Polite, and the police officer reacted by throwing his nightstick, which Bandy caught; when the soldier hesitated to return the weapon, Collins shot him.

Bandy, shot in the shoulder, was able to walk to a nearby hospital where he recovered. But someone in the crowd of about 3,000 people gathered at police headquarters said Bandy had been killed. The rumor grew to include the detail that he had died defending his mother. In less than an hour, the first window was broken, and the mayhem began.

But residents of Harlem were already troubled by the closing of one of their favorite nightclubs, the Savoy Ballroom, in April of that year. City and military authorities claimed that armed forces personnel had contracted venereal diseases from the women they met there. But Harlem residents said the real reason was that these white men were not only dancing with the black women — they were also going home with them. Here’s a short video that captures the atmosphere of the time:

The riot led to reforms. Among other things, Mayor Fiorello Laguardia ordered the establishment of the Federal Office of Price Administration in Harlem to investigate complaints of alleged price gouging. Landlords had been violating voluntary price restraints when lease renewals were due. Fiorello put the pressure on city agencies to force landlords to comply with cost controls. And he ordered the re-opening of the Savoy Ballroom. But Jim Crow was never very far away.

The riot inspired this painting by artist William H. Johnson, Moon Over Harlem: 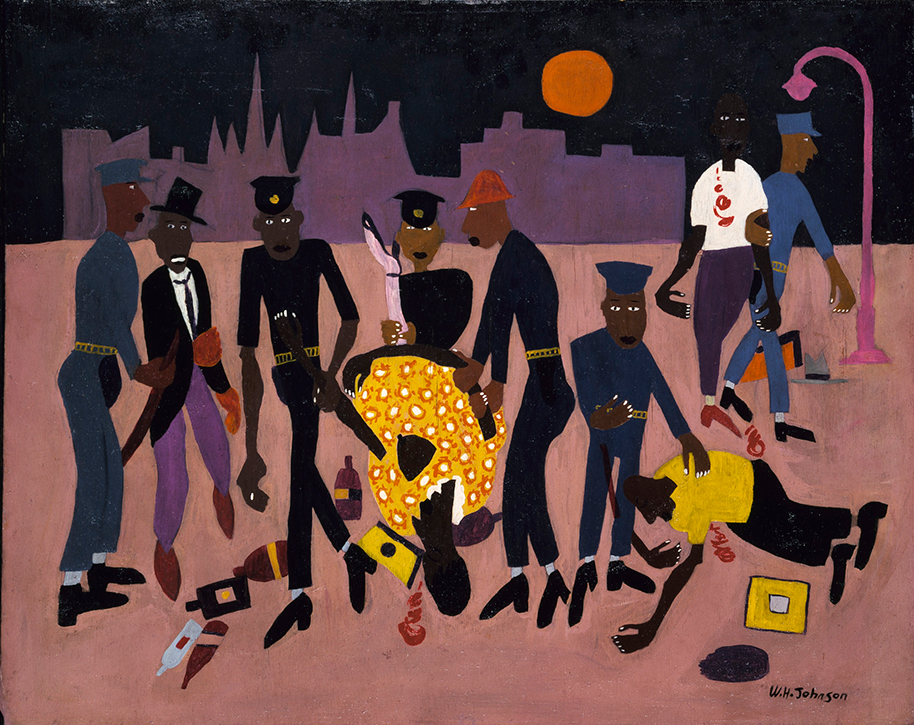 The painting is displayed at the Smithsonian American Art Museum. The label accompanying it notes that “Johnson painted the police as black men, and the ground is strewn with empty liquor bottles, as if the artist wanted to suggest that the people of Harlem were brutalizing themselves through their own behavior.”

Such an outlook is puzzling, but here’s a possible clue: From the time he was 18 years old, Johnson — a black man from South Carolina — spent much of his life among white people in the US and in Europe, and he married a Danish textile artist. Would it be simple-minded to wonder if he had absorbed a white attitude toward blacks, and if he stayed mostly outside the big picture described below?

The riot occurred during the war when things were tough all over for people of all races, but worse for those in black communities. They had been subjected to police brutality, discrimination in jobs and housing, and price gouging by merchants and landlords.

One of the ugliest and saddest aspects of this period concerned black veterans returning from the war. They had hoped that their service would finally earn them some respect. In fact, the opposite was true. White racists feared that, with their newly acquired skills in fighting and government-issued weaponry, blacks who did not “know their place” were less likely to stay in it. In several southern US states, they were murdered on the slightest pretext.

For example, in Arkansas, white military police killed Sgt. Thomas Foster, whom they had arrested for public intoxication. As he lay dazed on the ground and not a danger to anyone, they shot him five times. And the Justice Department refused to prosecute because “there was no prospect of conviction.”

In response, Adam Clayton Powell Jr. — who represented Harlem in the US House of Representatives from 1945 to 1971 — wrote an editorial entitled, “Mr. President, Just What Is It We Are Fighting For?” In it, he wrote “more Negro men have been killed and beaten, so far this year, than in any similar period of this century.” Even after death, black veterans received no respect. The body of one had to be driven 300 miles to another town because, where he had died, there were “no facilities for handling Negro dead.”

Adam Clayton Powell reflected on who Robert Bandy was really fighting with:

When Bandy hit Collins over the head with that club, he was not mad with him only for arresting a colored woman, but he was mad with every White policeman throughout the United States who had constantly beaten, wounded, and often killed colored men and women without provocation.

The riot in Harlem was one of five that year. The others took place in Detroit, MI; Beaumont, TX; Mobile, AL; and Los Angeles, CA.

The black poet Langston Hughes wrote a poem that explains all of these riots — and those yet to come. The words seem chiselled in stone… like an epitaph:

Now your policemen
Let your mobs run free.
I reckon you don’t care
Nothing about me.

You tell me that Hitler
Is a mighty bad man.
I guess he took lessons
from the ku klux klan.

You tell me Mussolini’s
Got an evil heart.
Well, it mus-a been in Beaumont
That he had his start —

Cause everything that Hitler
And Mussolini do,
Negroes get the same
Treatment from you.

You jim crowed me
Before Hitler rose to power —
And you’re STILL jim crowing me
Right now, this very hour.

Yet you say we’re fighting
For democracy.
Then why don’t democracy
Include me?

I ask you this question
Cause I want to know
How long I got to fight
BOTH HITLER — AND JIM CROW?