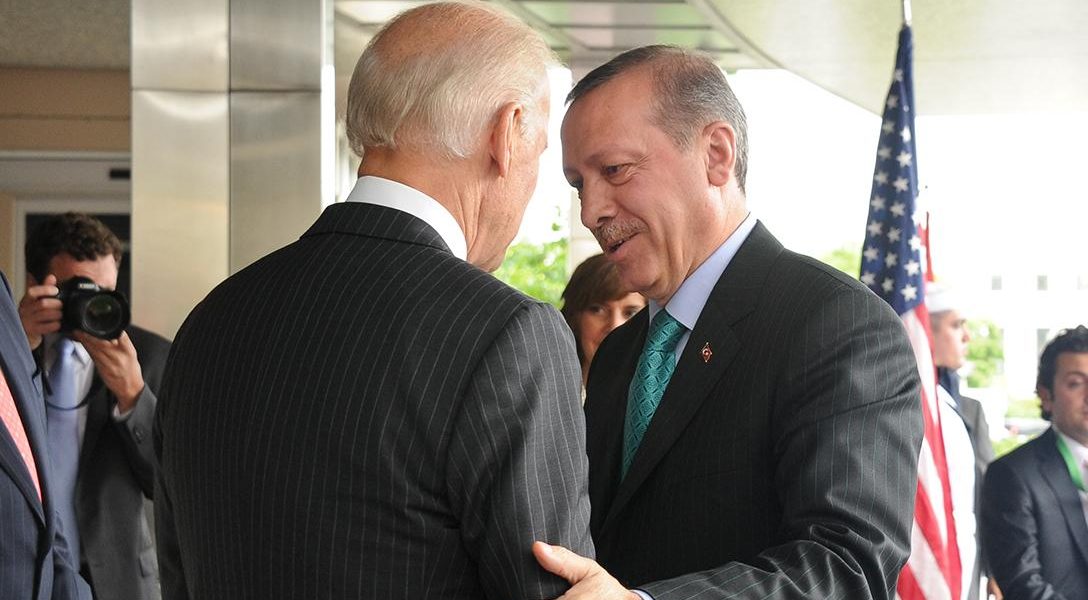 Biden Flies to Turkey to ‘Sweeten the Coffee’

UPDATE: In an important show of unity just hours before Biden touched down in Ankara on Wednesday morning, Turkish-allied Syrian rebels — backed by Turkish special forces and US aircraft — launched an incursion from Turkey against ISIS forces holding the Northern Syrian border town of Jarablus (in top right corner of ISIS territory featured on map below).

Over a month after the July 15 failed coup in Turkey, which many in that country are blaming on the US, Vice President Joe Biden is visiting Ankara to repair the fraying ties with a key NATO ally. His visit comes two weeks after Turkish President Recep Tayyip Erdogan met Russian President Vladimir Putin in Moscow, feeding speculations that Turkey is drifting away from the West.

Biden’s discussions with his hosts in Ankara will likely be dominated by the Syrian conflict, closely linked to the war between Turkey and the Kurds. Also sure to top the agenda: Turkey’s extradition request for the charismatic US-based Muslim cleric Fethullah Gulen, whom Turkish authorities blame for masterminding the failed putsch.

Biden’s visit is the first by a top US politician to the country after the coup attempt. The more than month-long delay has fueled complaints in Turkey of insufficient Western support for its democratically elected government. Turkish officials are clearly hoping the visit will patch things up.

“Our relations with the US are semi-sweet now,” Turkish Prime Minister Binali Yildirim told journalists on Saturday, using the world-famous Turkish coffee, traditionally served during visits, as a metaphor for the relationship between the two countries. “Biden is coming to Turkey to sweeten the coffee.”

Yet there is hardly a shortage of bitterness to sip in a region where Russia is actively seeking to chip away at US influence — in part by courting Turkey — and where Turkey has again recently threatened to flood Europe with refugees.

For Turkey, the issue of Gulen’s extradition — see our coverage of the existential conflict between two rival Muslim movements in the country — is one of trust between allies. For the US, extradition is primarily a matter of proper judicial process. Most analysts are skeptical that Gulen will be extradited any time soon, if ever — especially after reports of severe abuse of alleged coup plotters.

On Tuesday, the US acknowledged having received a formal request for Gulen’s extradition. In recent days, Yildirim reportedly requested that the US temporarily detain Gulen so that something “bad” wouldn’t happen to him, using language that many interpreted as an indirect threat on Gulen’s life.

As for Turkey’s ongoing conflict with the Kurds, that issue arguably ranks higher in Erdogan’s mind than even the ouster of Syria’s President Bashar Assad. Indeed, there have recently been cautious signs of thawing in the relations between the two strongmen over the Kurdish issue, at the same time that both strongmen’s relationships with the Kurds are declining.

The Kurds are widely considered the largest stateless people in the world: approximately 28 million are spread across territories claimed by Turkey, Iraq, Syria and Iran. Kurdish factions are engaged in a radical experiment in democracy in Syria, which they are seeking to replicate in Turkey as well.

Erdogan, who accuses them of separatism and terrorism, has sent his army into Kurdish-majority cities in southern Turkey to quash this attempt; this move briefly empowered the Turkish army in a way that may have contributed to the failed coup. In turn, following the chaotic purges that left the Turkish military weakened over the past month, Kurdish militants in Turkey took the opportunity to launch a series of deadly attacks.

The contrast between Erdogan’s hard line against the Kurds and the US position could not be starker. The Kurds are one of the very few reliable Western allies against ISIS on the ground in Syria. When Syrian airplanes attempted to bomb the Kurdish militia (and their American advisors) in the northern Syrian city of Hassakah last Thursday, the US reportedly went so far as to scramble its own jets to chase them away.

The complex political-military situation in the region is exemplified in another part of northern Syria, next to Turkey’s border. Here, Turkey-backed Syrian rebels are competing with the US-backed Kurds in at attempt  to drive ISIS out of its last corridor to Turkey. This is roughly the same area where Turkey was hoping to create a no-fly zone a few months ago. Turkey, which witnessed a major terror attack that killed over 50 people at a wedding near its border with Syria last week, is at the forefront of the war against ISIS. A key next step in the latter would be to clear the last remaining ISIS presence near the Turkish border — but that would require the Syrian rebels (green on this map), the Kurds (yellow) and Turkey (light gray) to fight ISIS (dark gray) rather than each other.
Photo credit: View interactive map at syria.liveuamap.com

In recent days, Turkish forces have reportedly been shelling both ISIS and Kurdish forces near a key border crossing. At the same time, President Assad’s Syrian army has been fighting all three militant groups nearby, and Russia has been seeking to poach some of the last remaining US-trained rebel groups in the area. Keeping all the different US allies, each with its own priorities, focused on ISIS will be no easy task for Biden.

All this comes on top of other issues heavy on the minds of Biden and his Turkish counterparts, including the refugee crisis, Turkey’s recent coziness with Russia, and Erdogan’s repressive domestic policies.

The last time Biden visited Turkey, in January, he riled his hosts by criticizing the mass arrests of journalists and academics, and by defending US support for Syrian Kurdish forces. Now these problems have only become thornier.

Little wonder, then, that few in Turkey are holding their breath for anything more than a metaphoric sweetened coffee out of Biden’s upcoming visit.

“It is more important for Turkey to see the US’s policy change that will be shaped after Biden’s visit instead of what Biden will say in Ankara,” reads an analysis in the pro-government newspaper Daily Sabah, widely considered an Erdogan mouthpiece.

The English translation may be somewhat shaky, but the implications are clear enough: “The huge crack between Turkey and the US, which is getting deeper and deeper by the day, opens the door for irreversible cooperations between Turkey and Russia and other regional actors.”