Will Anti-Vaxxers Merge With More Violent Groups to Destabilize the US?

Last week we alerted you to an upcoming rally in Washington protesting the mandate requiring vaccinations for participating in activities with the vaccinated, in schools, bars and restaurants, public transit, and so forth.

The Washington Post reported crowds at the rally carrying signs proclaiming “Vaccines are mass kill bio weapons” and “Trump won,” and a bus wrapped in “Arrest or Exile” signs, displaying pictures of Anthony Fauci, Bill Gates, and Jacob Rothschild. The Post explained: “The last [is] an echo of anti-Semitic conspiracy theories involving the Rothschild family.”

Prominent anti-vaxxer Robert F. Kennedy Jr. took it a step further, telling the crowd mandates are more totalitarian than Hitler’s Holocaust: “Even in Hitler Germany [sic], you could cross the Alps into Switzerland. You could hide in an attic, like Anne Frank did.” (Hours later, after a lot of backlash, Kennedy apologized.)

What disturbed us just as much as the deranged rhetoric at the rally was the sinister presence of the Proud Boys. They were there only briefly, but what about the next time? And what if they’re joined by the Oath Keepers and other violent right-wing groups?

What if all these “freedom fighters” were to combine into a flammable mixture of aggressively ignorant and armed crazies, all simmering in a stew of unemployment, inflation, bad weather, and lockdown resentment?

Are we crazy to worry about this? We hope so. Nevertheless, we will be keeping an eye on all of these groups and their acts of rage and rebellion, however small. Because history shows that from such sparks, dangerous conflagrations can grow. 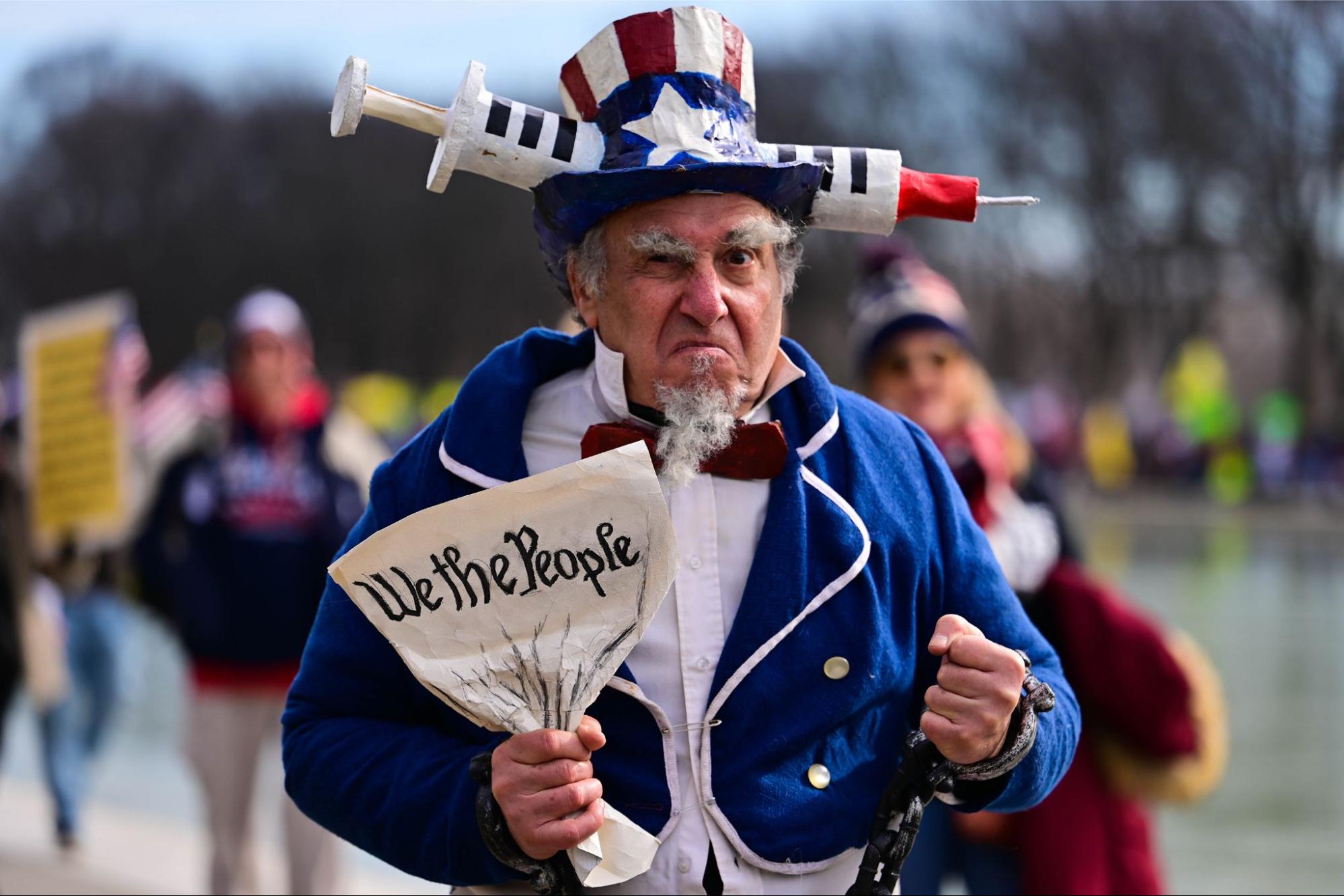 For example, we even found it interesting when a local website in New York City reported that anti-vaxxers created a scene at the American Museum of Natural History, where they sought to enter without wearing masks or providing proof of vaccination. They were arrested when they refused to leave after the museum closed for the day. What was especially troubling was the way the incident was used.

Several anti-vaxxer websites — noting that a mother had brought her young daughter Jayla along — made it seem as if the daughter had been arrested. In fact, that was not true. Here’s an excerpt from that local article:

When her mom was arrested, Jayla was brought to a nearby precinct where, NYPD officials tell us, she was given refreshments.

Several individuals can be heard berating the police in a video of the incident circulating on the web. “You’re traumatizing a little child,” said one man. “This is f*cking disgusting,” said another.

While some headlines indicate that the 9-year-old girl was “arrested,” the person who shared what appears to be the initial video — a Twitter user who goes by Luke2Freedom — quickly clarified himself after posting it. “A small correction on my title phrasing. The child was not arrested. The mother was, and the child was tended to until the mother was released about two hours later.”

This deliberate use of a child as a propaganda ploy — while misrepresenting what actually happened (either deliberately or by mistake) — is alarmingly typical of the anti-vax movement. In this way, it is strikingly similar to the “Stop the Steal” movement, wherein false information generates anger, chaos, crisis — and recruits. (For more on the subject, go here, here, here, here, here, and here.)

The episode described above was not widely reported nor was it, by itself, “big news.” But we wonder about similar acts of rebellious, law-breaking anti-vaxxers that are taking place around the country, and are going under-reported. How big is this problem?

We invite you to share information with us on other such incidents you may observe. And we would be especially interested if members of violent groups were also involved. Please contact us via the site.

Anti-vaxxers make it sound as if requiring people to be vaccinated and masked in the company of others is a huge threat to liberty — and frequently claim that statistics suggest there is no scientific basis for mandates. However, not only is it clear that masks protect others from illness and from serious harm, but vaccination does as well.

While vaccinated people can get COVID-19 and spread it, the difference in outcomes between the vaccinated and unvaccinated is quite significant. Statistics show that the vaccinated are more resistant to catching the virus, and when they get it, their cases are milder and of shorter duration.

More importantly, perhaps, for the mandate debate, those who catch COVID-19, despite being vaccinated, have a considerably shorter period during which they “shed” the disease — that is, in which they are infectious to others — than the unvaccinated.

In addition, when infected, the unvaccinated usually have a higher viral load, which increases the risk they will transmit to others. That alone justifies both masks and requirements for vaccination.

The effort to hype false information on this issue is growing by the day. Virginia Gov. Glenn Youngkin (R) has banned mask mandates in schools, though seven school boards in the state have now sued, asserting that he has no authority to do so. We see others seeking to score political points in this way, throwing kindling on the fire.

There really are no legitimate freedom issues in play; no one has a license to knowingly spread a potentially deadly disease to others. But the growing hue and cry from those who claim such a  “freedom” can only deepen the divisions in this society, ensuring that more people will be permanently damaged or die, and that the overwhelming burdens we face will continue to mount.

Russ Baker is Editor-in-Chief of WhoWhatWhy