Vaccine Skeptics to March on Washington — With a Dangerous & Confusing Message

On January 23, vaccine skeptics and mask resisters, influenced in part by podcaster Joe Rogan, will gather in Washington, DC, not far from where hordes attacked the Capitol a year ago.

The protest comes as a new CDC study finds that vaccines provide significantly more protection from severe, hospitalization-requiring COVID-19 than that provided solely by prior infection, or “natural immunity.” With the tremendous strain on the medical system, disproportionately generated by those opposed to vaccination, the efforts to stoke a movement around “liberty” deserves attention and discussion.

So far, the upcoming rally and march seem to be under the radar of most news organizations and have not been widely reported. This may be due to the difficulty in anticipating whether such events will be successful — and success in such matters is typically measured by the amount of coverage they receive.

The rally itself, ostensibly a push for freedom and liberty, pushes into the background the actual underlying theme promoted by several of its leading figures: doubts about whether vaccines are safe and whether people even need to be vaccinated against COVID-19.

A website for the rally declares, “We will not surrender our freedom out of fear.” It asserts that, based on principles of individual liberty, the government should not in any way mandate restrictions on people based on whether they are vaccinated.

The underlying premise is that, on balance, allowing the government to dictate public health measures necessarily represents a slippery slope to authoritarianism.

The site fails to mention that governments have long established health rules for the common good — and it is entirely possible that those involved are not themselves aware of history in this regard.

Nor is it mentioned that many who oppose vaccination requirements or mask mandates are also supporters of laws preventing abortions; here, they argue that there is a greater good than women’s personal liberties. 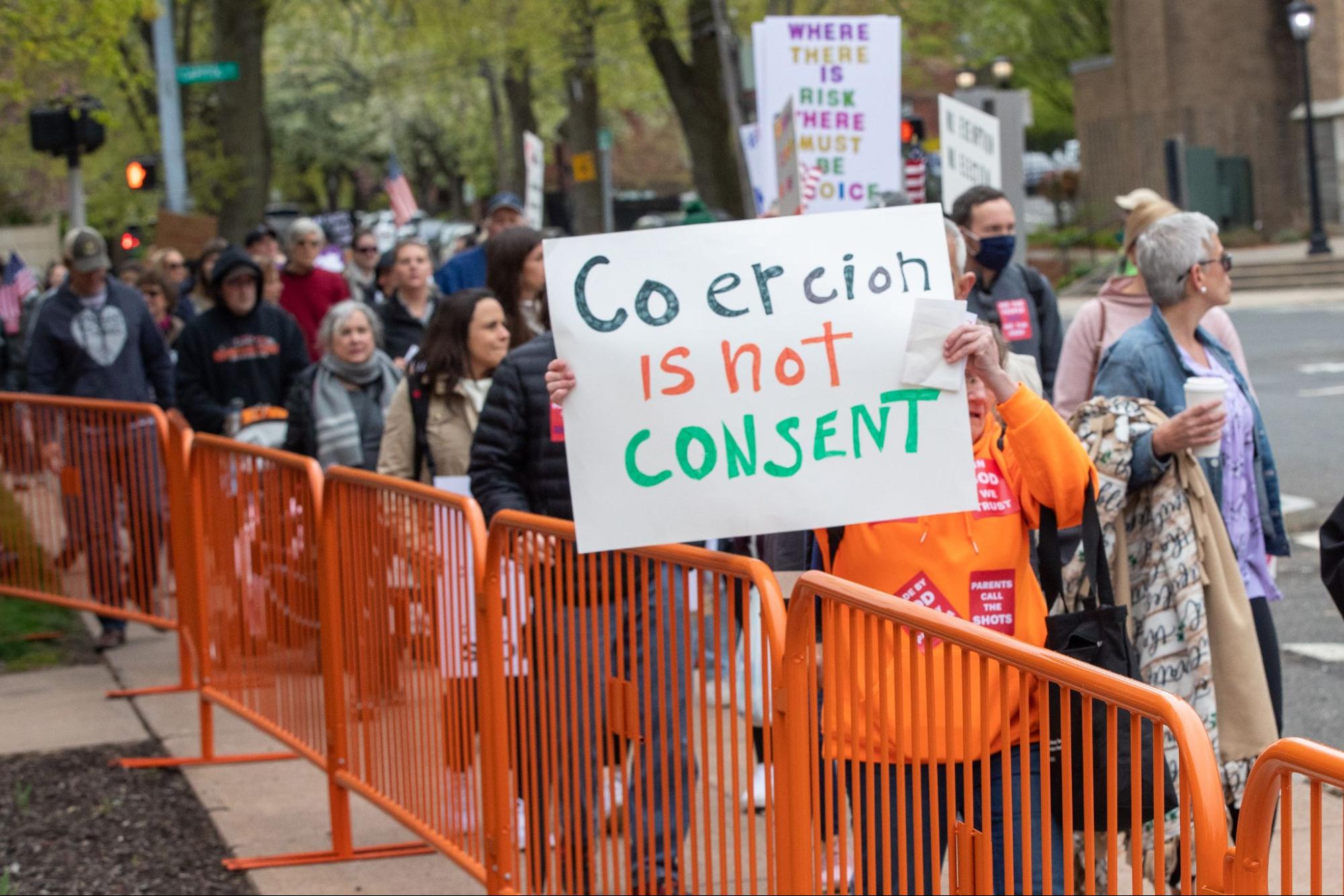 Coming in the midst of a crisis, at a time when Americans are more divided than ever, these attempts to portray public health measures as being about personal choice and individual rights will undoubtedly exacerbate divisions.

It’s uncertain whether Rogan’s reach will translate into a massive happening. If it does, it may add fuel to an already volatile situation, where elements of the American public feel increasingly alienated. Perhaps in anticipation of that risk, the sponsors have emphasized that they do not want trouble, with the slogan “United We Stand. In Peace We March” on their website.

The promotional material takes no stance on vaccines per se beyond asserting that vaccination status should not affect where people go or with whom they interact, such as in workplaces:

But the actual views of key figures regarding vaccines are quite clear. The most famous figure appearing at the event, and announced speaker, is Robert Kennedy Jr., who has made his name over the years largely by claiming that vaccines are inherently harmful. He first came to many people’s attention for his assertions that vaccines cause autism, though that has been disproven repeatedly.

Pivoting away from the “vaccines are dangerous” argument to a vague and unassailable concept like “personal liberty” seems like a smart marketing move, but one that could represent a new flashpoint in America’s war of words.

The rally — whose success is predicated on publicity — received a massive boost when Rogan, probably America’s most popular podcaster, invited each of the doctors associated with the rally onto his show separately to promote the event. While on the podcast, Dr. Peter McCullough made several unsupported claims, saying that the pandemic “was planned” and that if people are vaccinated “hospitals don’t test them for COVID.”

WhoWhatWhy wanted to interview McCullough and others involved, but for a citizens’ movement, the entity behind it is surprisingly nontransparent. The website does not even provide contact information. Nonetheless, WhoWhatWhy was able to track down McCullough, who initially agreed to a later interview. On a subsequent call, McCullough declined to be interviewed, but suggested we call the event’s publicist. He provided the man’s name, but would not give his number, and said, “Look it up.”

The spokesman, who asked not to be identified, said that the event’s sponsors are not anti-vaccine, they are pro-vaccine safety. Nevertheless, he said, 95 percent of the speakers have been vaccinated. But he contended that the government is covering up and denying adverse reactions:

“Big pharma and Fauci would have more credibility if they acknowledged these people,” he said.

However, Fauci actually has acknowledged these reactions, but explains, “The adverse events are unusual and rare, as a matter of fact, and clearly the benefit of protecting yourself from COVID-19 far outweighs any risk of adverse events.”

The issue seems to come down to a belief that the vaccines may be much more risky than we are being told, yet the event organizers actually have no scientific basis for saying that. And it is understandable that, in trying to get a reluctant populace to get vaccination protection, the authorities may downplay rare exceptions — which are normal with almost any medical procedure or treatment — lest people become irrationally fearful of vaccines and put themselves and others at risk.

The spokesperson also expressed the oft-stated concern that because the vaccines did not go through the normal two-year approval process they are inherently risky, though there is no evidence of them being riskier than past vaccines.

He also insisted that he is not anti-vaccine, and noted that he himself recently almost died of COVID-19. As for Robert Kennedy Jr., he said that Kennedy is not actually anti-vaccine, but is “pro-vaccine safety.”

Besides Kennedy and McCullough, another organizer/speaker is Dr. Robert Malone. Malone, who is among the numerous early researchers whose work led to mRNA technology, offers a great deal of credibility in the eyes of vaccine doubters because of his supposed expertise. 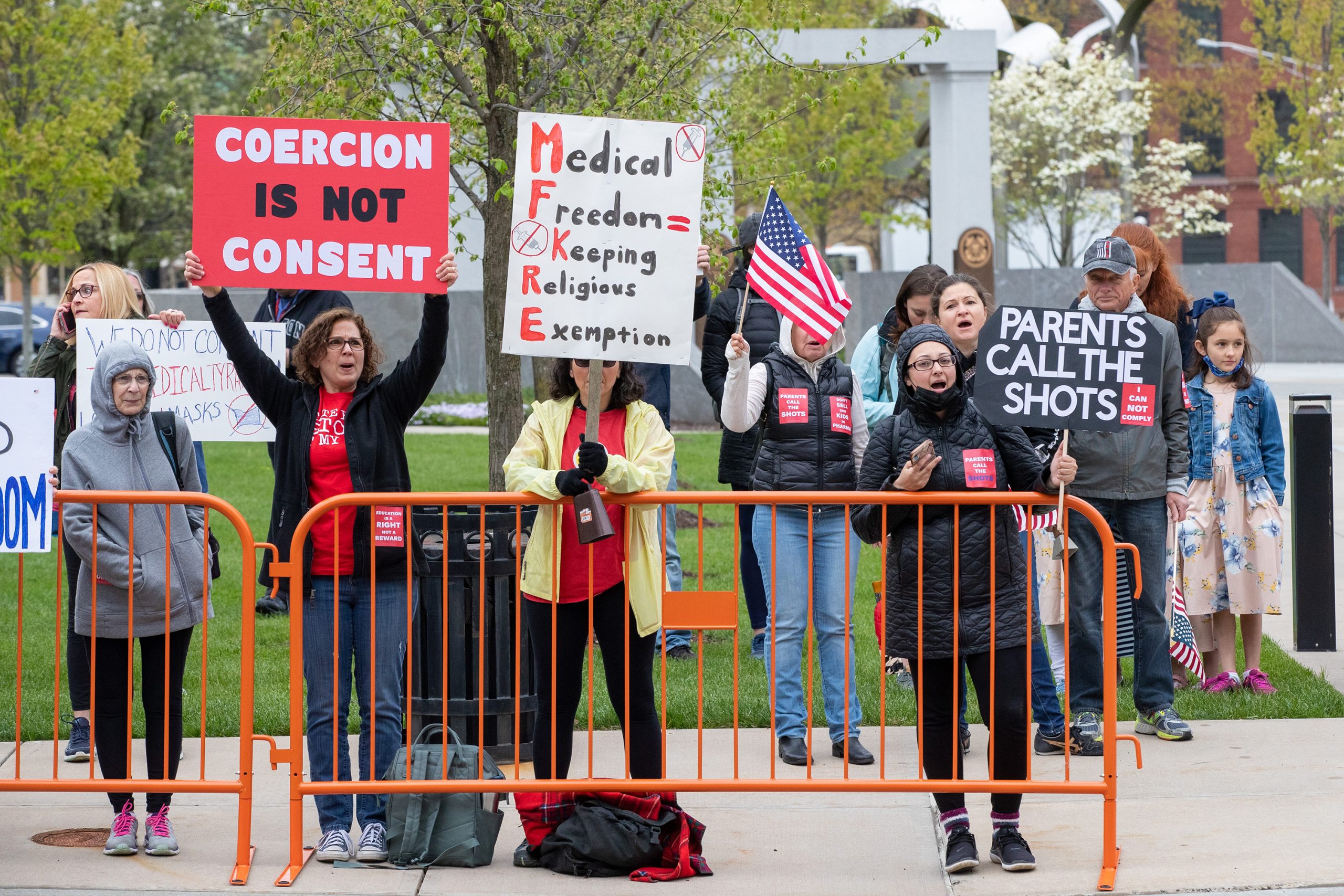 The mere fact that Malone is now famous while other mRNA researchers are little-known highlights the benefit of becoming so publicly converted to a cause.

Yet an Atlantic profile of Malone notes that his primary objections to COVID-19 vaccines relate to his concern over the expedited approval process, and that adverse reactions may be underreported, and an unsatisfying personal experience when he contracted COVID-19 after being vaccinated.

None of that qualifies him to refute the overwhelming evidence that COVID-19 vaccines have been an enormous blessing for the public good — or to suggest the unvaccinated have an inalienable right to mix among the population in workplaces and other public spaces.

“Mandates are not un-American,” said Peter Lurie, executive director and president of the nonprofit Center for Science in the Public Interest.

“To me, what’s American is to care about one’s neighbor and to follow the clear dictates of science to protect yourself and those neighbors. I don’t see this as a meaningful encroachment upon freedom. Indeed, schoolchildren have been vaccinated against all kinds of diseases for decades now with only minor complaint. And the result has been lives saved and morbidity averted. The case for the COVID vaccine is probably even stronger in terms of the likely number of deaths prevented.”

It’s worth remembering that elements of the population have been attacking vaccination and its precursor, inoculation, as far back as the days of George Washington, Cotton Mather, and  Benjamin Franklin.

As for the branded merchandise on the rally website, it includes face masks that say “Defeat the Mandates.” Irony sells.

Asked if the rally organizers also oppose mask mandates, which may involve liberty but presumably involve close to zero health risk in wearing a mask, the spokesperson replied, “Good question. I have no idea.”