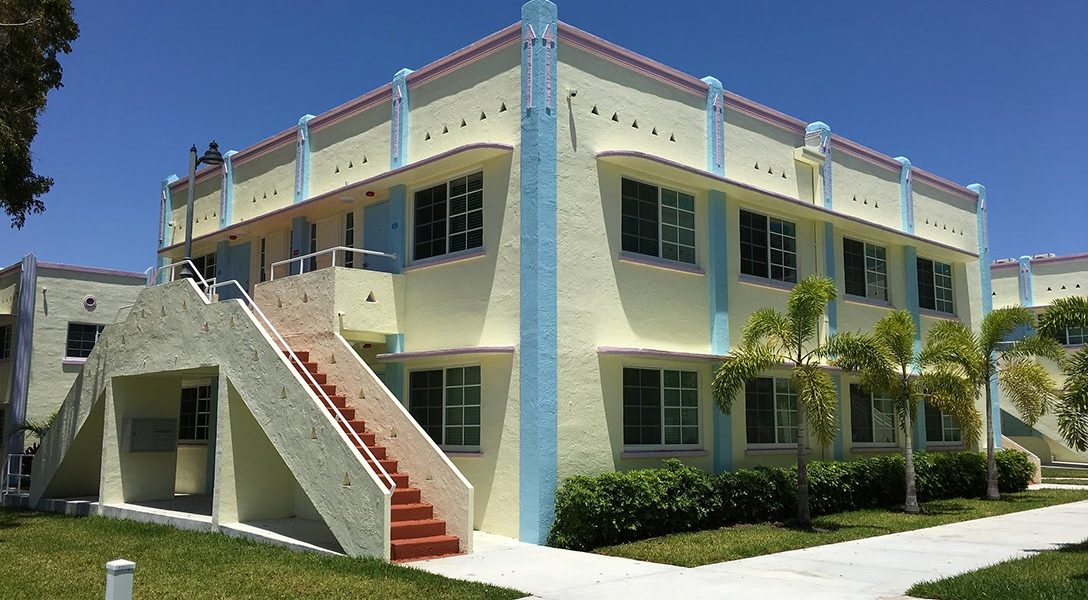 This article is part of a series on economic inequality in the US.

In 2014, Dani Brockington moved to Atlanta for a cushy job as a graphic designer. She rented an apartment in Midtown, the only neighborhood she knew much about. The cost was $1,350, but with her agency job, she could afford it. A year later, she switched rentals to a house in the West End, a historically black neighborhood, for $1,500 a month.

She didn’t realize it at the time, but her new landlord had a habit of switching tenants every couple of years, then upping the rent for a newcomer. By 2017, it was Brockington’s time to go, but she convinced her landlord to give her some time so she could find a new place. Then Hurricane Irma hit.

When a tree fell on Brockington’s home, she was immediately displaced. She lost her graphic design job and was unable to find an affordable alternative, so she made the choice to move back in with her mother in Charlotte, NC.

For Brockington, it was a hurricane; for many others, it’s a far more insidious menace. The coronavirus doesn’t force people out of their homes due to blunt trauma or damage, or with such immediacy. The coronavirus attacks health, but also capital. It can ravage our physical bodies, but also our bank accounts when we lose our jobs, lose our health insurance, or suffer a long-term illness.

After the COVID-19 pandemic began, governments in 42 states and Washington, DC, instituted eviction moratoriums for renters who cannot pay. Already, many of these moratoriums have ended, and residents owe back rent. More are set to expire by the end of July, the same time federal unemployment benefits end. Those who will be affected most are minorities.

One aspect of the structural racism being protested across the country is the disparity in housing opportunities that correlate with race, and vary by community. Black people, Indigenous people, and people of color can often live in poorer communities. Here housing is cheaper but economic opportunities are rarer.

Cities and states have long provided what is sometimes disparagingly called “public housing,” but doing so effectively corrals the poor into racially homogenous communities sealed off from decent economic opportunities and public services — especially health services.

But it may also highlight a potentially effective remedy, something that’s been around for decades but remains largely under the radar of public-policy focus.

According to Sasha Hauswald, director of state and local policy for Grounded Solutions Network, inclusionary zoning is particularly good at “providing middle income or moderate income housing for folks who are still really struggling to afford market rate prices but also don’t qualify for most of the federally subsidized programs.”

In the fall of 2017, in one San Francisco building, 6,580 people applied for a total of 95 affordable units, which met less than 1.5 percent of demand.

In contrast, exclusionary zoning is the practice of effectively screening out low-income residents by, among other things, authorizing development of neighborhoods with minimum lot and house sizes unaffordable by low-income people, or restricting development of more-affordable multi-family housing. Exclusionary zoning was once a vehicle for outright racism, and the Supreme Court ruled it constitutional in 1977.

Today, 900 inclusionary zoning programs are in place across 25 states and Washington, DC, according to Grounded Solutions Network, a national organization focusing on inclusive housing policy. Proponents see it as a way to allow low- or median-income households into areas of higher opportunity, while promoting desegregation.

A couple of years after Dani Brockington was forced out of Atlanta, she stumbled upon an application for an affordable co-living space in that city called The Guild. She hopped on the opportunity. She was accepted and moved back to East Lake, just outside of Atlanta, to co-live with a handful of others in the home of founder Nikishka Iyengar.

Eventually, Iyengar made The Guild official by moving it into a seven-unit complex in Sweet Auburn, a historically African American district of Atlanta. At $1,200 per month, rent includes everything — which means no shocking utility costs from Georgia Power, a company with exclusive rights to power the state. By 2019, Brockington was The Guild’s community manager.

It worked out for Brockington, and The Guild is working to expand to help others find affordable housing in the city, but not everyone in Atlanta — nor the rest of America — has the same story.

Not In My Backyard

There are significant obstacles to inclusionary housing. One is the age-old NIMBY (not in my backyard) objection by people who fear the presence of low-income housing will reduce their own property values. Others object to the public impact of either increased housing density or greater suburban sprawl. As a rule, residential development represents a net cost to local governments. Those factors help explain why, according to the Lincoln Institute of Land Policy, just 11 percent of Americans in 2017 lived in jurisdictions with inclusionary zoning. Where it does exist, though, it produces housing that is significantly more affordable than the market average.

In the Fahrenheit building in the Petworth neighborhood of Washington, DC, rental apartments normally run an average of $2,570 per month. About 9.6 percent of these units are subsidized through inclusionary zoning at an average price of $1,636, according to that same research.

Montgomery County, MD, has been practicing inclusionary zoning in some way since 1974, when the local government required developers to reserve 15 percent of units to sell or rent below market value. Over the course of 35 years, they created more than 13,000 units of affordable housing.

In most regions, though, the numbers are far lower. In the fall of 2017, in one San Francisco building, 6,580 people applied for a total of 95 affordable units, which met less than 1.5 percent of demand.

Atlanta launched an inclusionary zoning project in 2018, primarily along the BeltLine, a multi-mile pedestrian path that circuits the city. The former railway became a multi-use trail around the heart of Atlanta in 2008, and was intended to improve transportation and promote green space and healthy living in the area. It succeeded in that way, but instead of elevating the current residents of the area, the project pushed them out, essentially gentrifying the entire region.

According to a 2019 report by the Federal Reserve Bank of Philadelphia and the University of Chicago, Atlanta has one of the highest rates of gentrification in America. The city is also the nation’s capital for income inequality, according to the Brookings Institution. The BeltLine has exacerbated this by taking over once Black and working class neighborhoods and replacing them with rentals that are above market value. Even the BeltLine’s founder, Ryan Gravel, resigned from the board because he couldn’t reconcile its inequitable tendency. At this time, inclusionary zoning along the BeltLine serves as a bandage fix for the problems a gentrified path introduced.

On either side of the spectrum, localities use inclusionary zoning in tandem with tax programs and Section 8, a federal law that subsidizes private landlords who provide low-income housing.

Hauswald views inclusionary housing as one tool in a multifaceted toolbox.

“It’s not a panacea to the affordable-housing shortage right now,” Hauswald told WhoWhatWhy. However, she adds, it’s particularly good at providing middle- or moderate-income housing for folks who struggle to afford market-rate prices but don’t qualify for most federally subsidized programs. According to a 2016 study by the National Housing Conference, most inclusionary zoning policies serve families at 51 to 80 percent of the area median income (AMI), and only about 2 percent target households below 50 percent.

Developers and economists tend to oppose inclusionary zoning for the simple reason that it reduces returns. Economists are more focused on expanding supply.

“The only way to get more housing affordability for the [highest] number of people is to build more housing,” said Ash Navabi, a senior economist with Toronto Housing Matters, a coalition that advocates increasing the housing stock by revising zoning ordinances that restrict building units with no considerations for economic, preservation, or environmental conditions. Affordable housing can come with incentives for developers to offset those reduced rent returns. Sometimes developers can avoid some height or unit number ordinances by providing a certain percentage of affordable units, which can increase their construction square footage above what the maximum zoning regulations allow. But by not allowing developers to circumvent these restrictions without affordable housing inclusion, many are prohibited from the optimum building potential. Navabi believes that inclusionary zoning limits the volume of new housing and puts upward pressure on prices.

“When you require new housing projects to reserve a set number of units for below-market buyers, then this makes the total number of market-priced housing [units] available go down,” he says. “By reducing that, it actually pushes the market up.”

Inclusionary zoning also serves to counterbalance the racism that has historically accompanied exclusionary zoning. Even after the 1917 US Supreme Court case Buchanan v. Warley, where exclusionary zoning was ruled unconstitutional, minorities were largely barred from mostly white neighborhoods. Buchanan, a white man, was selling a Louisville house to Warley, a Black man. In Louisville, a Black person could not occupy a home in a mostly white neighborhood. Warley did not complete the sale, because 80 percent of the block’s residents were white. Buchanan sued Warley in an attempt to receive his money, but the statute remained. In 1968, the Fair Housing Act prohibited most kinds of overt discrimination, but one thing it didn’t prohibit was discrimination against class.

That’s where the discrimination loophole comes into play. According to The Century Foundation, a progressive policy think tank, 25 percent of impoverished Black Americans reside in high-poverty neighborhoods, as opposed to 7.6 percent of impoverished white Americans. The result is areas of concentrated poverty, a consequence of class-based segregation that disproportionately affects Black people, indigenous people, and other people of color. Exclusionary zoning exacerbates segregation and keeps marginalized communities from areas of high opportunity.

An Innovative Approach to a Social Housing Problem

Navabi calls the coronavirus pandemic a “demand shock,” or “a sudden, unexpected shift for how people choose to view a certain commodity or service.” Though a pandemic reduces demand for new housing by making people less likely to move, travel, and otherwise spend money, Navabi says that it does not change fundamental economics.

However, supporters of inclusionary zoning believe that it can be an effective tool in times of crisis.

The coronavirus pandemic disproportionately affects low-income communities and communities of color. A study by the Centers for Disease Control of 580 patients hospitalized with the virus showed that 33 percent were Black, though Blacks comprised only 18 percent of the studied populations. Some 45 percent of hospitalized patients were white, though whites comprised 59 percent. Isolation from public health services exacerbates inequality.

Because they’re more likely to hold “essential,” low-wage jobs, marginalized communities are also more likely to be laid off as a result of the pandemic, leaving them even more economically vulnerable than before. A national Washington Post–Ipsos poll conducted from April 27 to May 4, 2020, showed that 16 percent of Black people reported being laid off or furloughed since the outbreak began, compared with 11 percent of white people.

“Where you grow up shouldn’t dictate where you end up, but research shows that a neighborhood where a child grows up has a really significant impact on their outcome,” said Hauswald.

Hauswald cautions that inclusionary zoning practices cannot be copied and pasted from one area to another, because demographic and economic conditions are unique to a region.

To the extent that protests now roiling the country are about unequal housing and other economic disparities, Hauswald said, “it’s long-term systemic policy forces that got us here, and that’s what will get us out.”

It wasn’t policy that helped Brockington find a place in Atlanta, but rather community members like The Guild’s founder, Nikishka Iyengar, who work on a micro level to combat gentrification and rising housing costs. Brockington recognizes housing inequality as a structural issue, one that inclusionary zoning may help, but one that ultimately must be addressed at the root.