Unless you live on Billionaire’s Row, you’re probably aware that economic inequality is as salient a topic these days as it’s been in perhaps a century. That should be no surprise. Substitute heavy-industry robber barons with hyper-rich social-media moguls; Gilded Age Newport mansions with $238 million Manhattan condos; and slum-dwelling immigrants with the opiate-addicted Rust Belt underemployed, and it starts to feel a lot like 1890 again.

But if you think something is missing from the national conversation about inequality, you’re not wrong. It tends toward sweeping assertions about what’s “fair” and “decent” in a country as rich as the US. That’s the sort of argument you hear when Bernie Sanders (I-VT) calls for rich people to pay their “fair share” of taxes, or when conservatives accuse liberals of wanting to “punish success.”

The problem with this sort of argument is that it conflates two different things: fairness and equality (or equity, if you prefer). One isn’t necessarily the other, as any poker player can tell you. If an exceptionally skilled player happens to win all the chips, that’s just as fair an outcome as an equal distribution of the chips, so long as everyone plays by the rules. Indeed, an equal distribution of the chips would be unfair if one talented player deserves to win them all. And, as conservatives reasonably argue, the best players won’t come to the table at all if they know their winnings will be confiscated in the cause of greater equity.

Fairness, it turns out, is only one of two relevant questions here, and it’s not particularly helpful when what’s fair to one person can be unjust to another.

Luckily, the other question involves something less subjective: the practical consequences of inequality. It might be fair that one player wins all the chips, but the game can’t continue unless he makes concessions that he might not care to make. Pragmatism might require a bit of redistribution, fair or unfair.

The same holds true for the economy at large: You don’t have to agree on what’s fair to acknowledge that beyond some level, inequality has objectively perverse social consequences. To note another critical distinction, some argue that it’s not inequality per se that’s problematic, but rather simple poverty.

But there is evidence that a high level of inequality impedes economic growth; compromises the most basic tenets of democracy by giving too much power to the wealthy; and produces worse healthcare, educational, and environmental outcomes. What’s more, it seems to exacerbate all of these problems by generating a self-sustaining cycle in which economic inequality begets political inequality that begets economic inequality, ad infinitum. 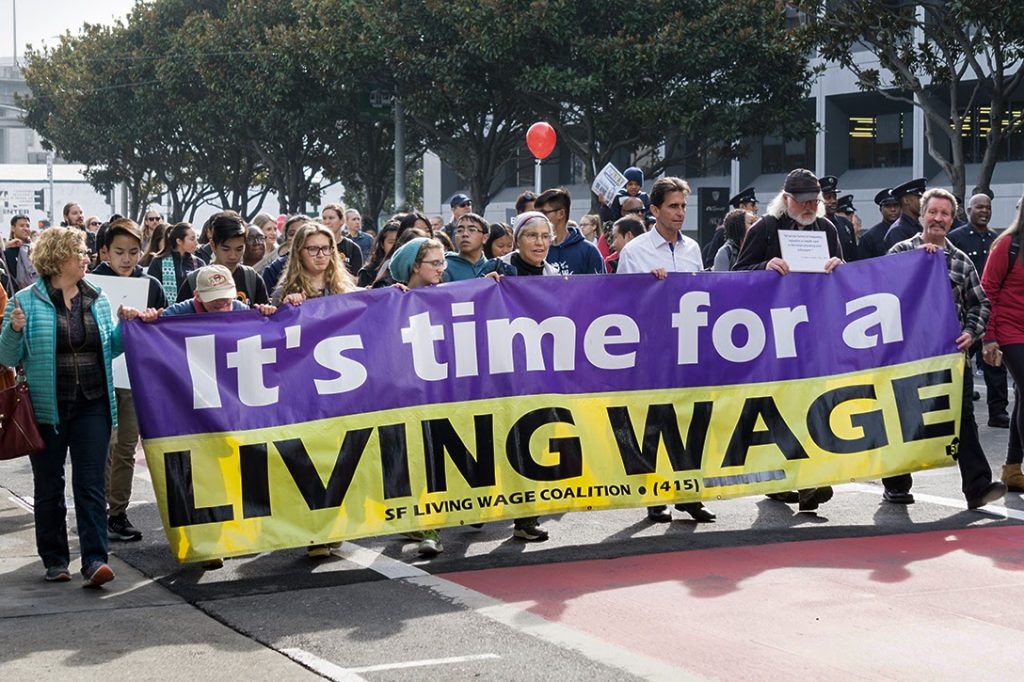 It’s this aspect of inequality — the material effects, as opposed to moral objections — that WhoWhatWhy intends to focus on during the 2020 campaign. Though the two candidates — Sanders and Elizabeth Warren (D-MA) — most vocal about inequality are out of the race, the larger issue of distributive justice is not going away. Grappling with it requires examining the effects of inequality along a number of lines.

That economic and political inequality are ultimately the same thing is not a new idea. The Framers worried about the rise of ossified, European-style caste systems and the politics that sustained them. “We may have democracy, or we may have wealth concentrated in the hands of a few, but we can’t have both,” said the eminent jurist and Supreme Court Justice Louis Brandeis a century ago.

As philosopher and educator John Dewey put it: “Until industrial feudalism is replaced by industrial democracy, politics will be the shadow cast on society by big business.”

In a world governed by the principles of Citizens United — the 2010 Supreme Court ruling that money is a form of protected political speech — wealthy, organized interests are not just bound to win; they’re supposed to win. What does that mean for the principle of “one person, one vote”?

Health correlates strongly with wealth. In 2011–13, thirty-eight percent of people in US households making less than $22,500 a year reported being in poor or fair health, compared with 12 percent in households making more than $47,700. This was true even when both groups were covered by insurance. The richest 1 percent of men lived 15 years longer than the poorest 1 percent. The gap for women was 10 years. Poor adults are more than three times more likely than rich adults to have trouble with the activities of daily living. Their children are more likely to be obese and have elevated blood lead levels than those in richer families. In 2012, the wealthy received 43 percent more doctor visits than the poor.

COVID-19 throws additional light on how economic disparities drive health disparities. In New York City, epicenter of the US pandemic, infection rates as of mid-April correlated strongly with class.

Statistics like these raise a fundamental question in a society where many regard inequality as not just inevitable but even virtuous: Should healthcare be regarded as a public good or a private privilege?

Income and wealth disparities among working people tend to get amplified among retired people, for the simple reason that what you earn during your working years largely determines what you earn when retired. But in a world where not everyone has access to 401(k) or similar plans, and where many who do have access cannot contribute much to them, what happens to people who cannot support themselves adequately in old age? Should government help out in ways that go beyond Social Security and Medicare?

Fifty years ago, C-level executives earned perhaps 30 times what their median employee earned; today it’s maybe 400 times, depending on who’s counting. Apart from whether this is fair, is it productive for the company or for the larger economy?

If we agree that extreme inequality is intolerable, what do we do about it? Responses range from Warren’s wealth tax, to caps on income among executives at publicly listed corporations, to a Universal Basic Income.

We’ve covered inequality as it affects governance and healthcare, and will be writing about its consequences in other areas. In coming weeks you will also hear from guest writers, among them The New School’s Teresa Ghilarducci on inequality in retirement income, and Sam Pizzigati of the Institute for Policy Studies on one way to arrest the growing disparity in management/worker income.

It would be utopian to expect a society of perfectly equal outcomes or even perfectly equal opportunity. In a competitive, capitalist society some level of inequality is inevitable. The question is how much is tolerable, either morally or practically. We hope our series enriches the national conversation about this question.

One response to “The Real Problem With Inequality”