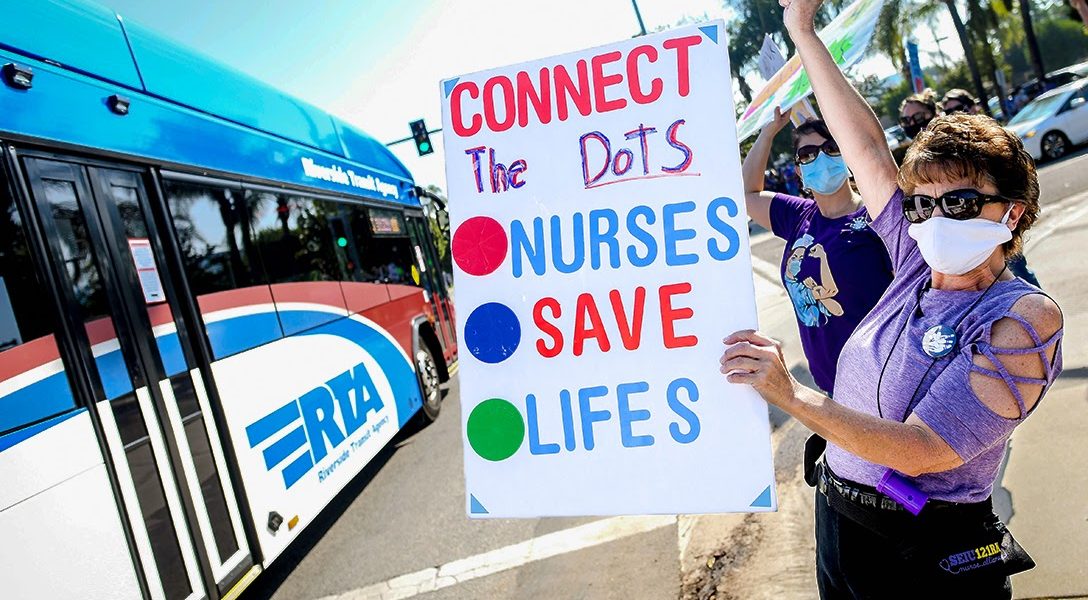 What do all of these negative outcomes have in common? They are all happening at understaffed hospitals whose health professionals, especially nurses, say they are stretched to the breaking point — and that was before COVID-19 arrived.

And many nurses’ unions and associations view minimum, mandatory nurse-to-patient ratios as the only viable solution to the problem of overworked health professionals and underserved patients.

They cite studies over the years showing a direct link between higher nurse-patient ratios — for example, one nurse to three patients — and better health outcomes, including lower death rates, shorter patient stays, lower rates of urinary tract infection and gastrointestinal bleeding, and lower rates of failure to rescue.

Advocates also point to a study showing that every additional patient assigned to a nurse’s caseload reduces by 5 percent a patient’s likelihood of surviving an in-hospital cardiac arrest. Additionally, nurses from units with low staffing and poor organizational climates were “twice as likely as nurses on well-staffed and better organized units to report risk factors for needlestick injuries or near-misses,” according to a 2002 study.

Previous efforts to pass such laws have met with limited success, with California the only state to have enacted a minimum nurse-patient ratio for acute care hospitals. But that could change due to a backlash by rank-and-file nurses and other health professionals against what they see as disregard for their safety by hospitals and other healthcare providers during the pandemic.

“I have been a nurse in the United States since 1984. I have never seen nurses this disaffected from their employers,” Gerard Brogan, director of nursing practice for National Nurses United, told WhoWhatWhy. The union represents more than 150,000 registered nurses in contract negotiations.

One study by National Nurses United estimated that every day in the US “700 people die from preventable errors in their medical treatment or complications from those errors.”

The shortage of basic personal protective equipment (PPE), especially early in the pandemic, along with exposure to infected patients and the lack of coronavirus testing for themselves, have led nurses to direct their anger toward employers. Some nurses had to use garbage bags as a substitute for PPE.

“I am hearing a hue and cry wide across this country now — we are expendable, we are disposable, we are sacrificial lambs to the slaughter,” said Brogan.

In 2004, California became the only state to set mandatory minimum nurse-patient ratios. For most hospital departments, the law requires a minimum ratio of one nurse for every five patients; for intensive care units, the ratio is one to two. Nurses say such laws are an essential step toward establishing a safer workplace and improving healthcare.

The California measure was largely a response to complaints by nurses and other healthcare professionals that medical services were stretched too thin, with patients’ health and nurses’ safety being put at risk. One study by National Nurses United estimated that every day in the US “700 people die from preventable errors in their medical treatment or complications from those errors.”

The California law was met with strong opposition from hospital associations, who criticized it as an inflexible, one-size-fits-all straitjacket. Jan Emerson-Shea, vice president of external affairs for the California Hospital Association, said it was impractical for any hospital to keep its nurse-patient ratio within a strict limit. She cited all the ups and downs of hospital staffing needs, such as a disaster or violent crime causing a sudden inrush of patients, or nurses calling in sick.

“Hospitals are a really dynamic environment. You can’t plan for all these types of things,” said Emerson-Shea.

Detractors say mandatory nurse-patient ratios would saddle hospitals with high labor costs, potentially forcing many to close. They also predicted such measures would cause nursing shortages.

For example, in 2018 Massachusetts voters rejected a nurse-patient ratio ballot initiative. Opponents said there was a shortage of 1,200 nurses statewide to fill current staffing positions, and that requiring more nurses per patient would only make matters worse. Critics also argue that such laws would result in too much micromanaging, tying the hands of nurses and other medical professionals to make their own decisions and judgment calls.

As one example, they said patients could be turned away from emergency rooms if their presence would cause the nurse-patient ratio to drop too low. According to opponents, Massachusetts has already experienced that situation under its law requiring minimum nurse-patient ratios for intensive care units.

Advocates say California’s success with mandatory ratios demonstrates their value. A 2010 study, for example, compared California hospitals to those in Pennsylvania and New Jersey, which did not have ratio laws. It found that if other states had matched California’s required nurse-patient ratios in surgical units, patient deaths would have dropped 13.9 percent in New Jersey and 10.6 percent in Pennsylvania.

“The differences between California and other states are striking. Nurses in California take care of two fewer patients on average than nurses in Pennsylvania and New Jersey in general surgery. These differences lead to the prevention of literally thousands of deaths,” said Linda Aiken, author of the study. (Opponents disagree, citing three other studies that show no difference.) One reason cited for the lower turnover rate was increased workplace safety. A study of occupational injury and illness rates before and after the ratio law took effect found there was a 31.6 percent reduction in occupational illnesses and injuries among RNs working in California hospitals.

Opponents dispute that mandatory ratios improve patient outcomes, and say such laws undercut the “autonomy and flexibility” of nurses and other frontline medical staff to exercise their own professional judgment. They also cite studies and statistics showing ratio laws increase hospital costs — which are passed on to patients and insurance companies. According to the US Bureau of Labor Statistics, the average salary for RNs in California is about $113,000 annually, not including benefits.

Another reason cited by opponents of nurse-patient ratios stems from the law of unintended consequences: To afford more RNs, some California hospitals have reduced the numbers of support staff, creating more work for nurses, not less. And they say requiring mandatory ratios at all times interferes with the ability of nurses to schedule their own meals and breaks, or requires a “floating” nurse from another department to fill in.

Hospital industry representatives want solutions that rely less on government regulations and more on market-friendly approaches. They propose internal committees at each hospital, made up of administrators and nurses who could issue more flexible recommendations for proper staffing levels.

Others are skeptical. “There [are] no teeth in any of these laws. There are no penalties for hospitals if they decide to disregard it,” John Welton, RN, told WhoWhatWhy. Welton is a professor at the University of Colorado’s Department of Nursing and interim chair of the division of health systems, leadership, and informatics.

Hospitals don’t get more revenue for hiring extra nurses, so Welton favors separating nursing expenses from other hospital costs, then billing for the actual hours of nursing care delivered to a patient. In his view, proposed ratio laws also fail to distinguish between different types of hospitals (community hospital vs. university hospitals, for example), or varying levels of nursing required by patients with different illnesses or levels of severity.

“If all you have is a hammer, then everything looks like a nail,” said Welton, in reference to ratio laws as the catch-all solution. He also supports the idea of “magnet hospitals,” with excellent nursing and management practices to alleviate understaffing, and promote healthier work environments.

Critics are skeptical of Welton’s suggestion to bill separately for hourly nursing care. Brogan, the California nursing union rep, notes that there has yet to be a hospital that has adopted this practice.

The Short and Long Term

The COVID-19 pandemic and related surge of new hospital patients have reduced — at least in the short term — the likelihood of more states adopting nurse-patient ratio laws similar to California’s. In fact, Massachusetts recently suspended its ratio law for intensive care units due to the influx of coronavirus patients.

But nobody expects the issue to go away. At least 95,000 healthcare personnel in the US have contracted the coronavirus according to the CDC, and more than 500 have died, leaving nurses and other healthcare professionals feeling more vulnerable than ever. With the perception that healthcare employers don’t have their backs, there has been a noticeable uptick in the number of job actions around the country.

Some nursing unions believe hospitals have misled the public about the impact of mandatory nurse-patient ratios. They note the California law establishes minimum nurse staffing levels for patients and say nothing prevents hospitals from adding more nurses depending upon patient needs. Critics also denounce as a scare tactic arguments by hospital administrators that stricter ratios would prevent assignment of extra nurses to treat sicker patients, or create added expenses that would force hospitals to shut down.

A bruising initiative campaign in Massachusetts did not help relations between the hospital industry and nurses’ organizations. Supporters of a 2018 ballot measure to expand minimum nurse-patient ratios to more hospitals accused opponents of drumming up fear and confusion among voters, who rejected the measure by a margin of more than 2-1.

Nonetheless, Illinois, New York, Michigan, Massachusetts (again) and Pennsylvania are all considering nurse-patient ratio legislation. The growing hostility to management by healthcare employees could result in a half-dozen states adopting mandatory hospital staffing levels in 2021 — regardless of whether the pandemic waxes or wanes.