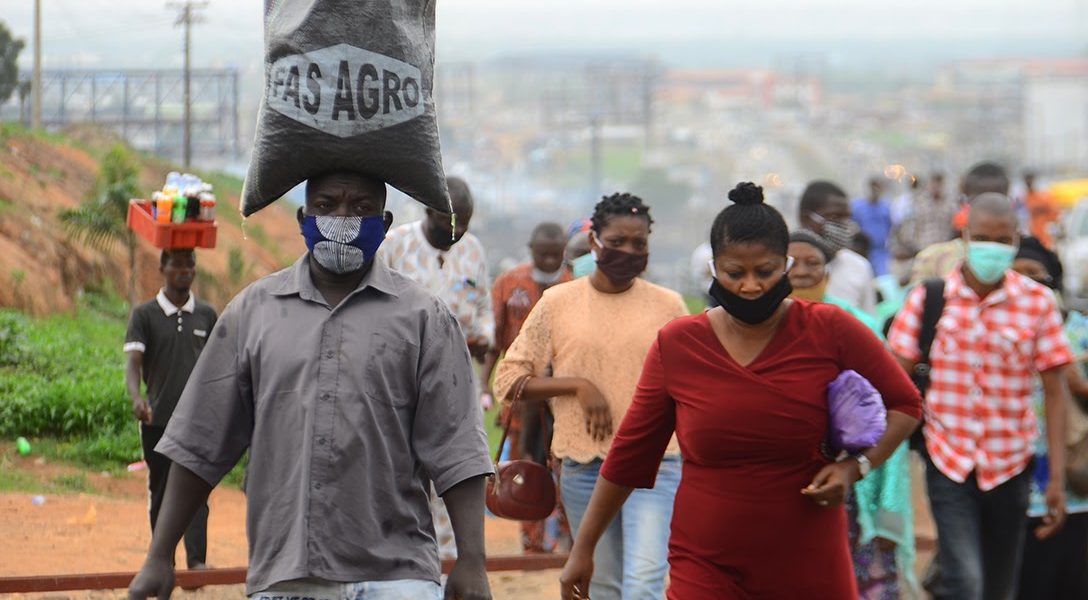 People wear face masks ahead of a police checkpoint in Lagos, Nigeria, in compliance with the state directive to curb the spread of COVID-19. Photo credit: © Olukayode Jaiyeola/NurPhoto via ZUMA Press
Health & Medicine

Nigeria has more people living in “extreme poverty” than any other country; the United States is considered one of the world’s richest nations. Yet, in both countries, the COVID-19 pandemic has revealed the fragility of their social systems.

When WhoWhatWhy put out a call for stories from around the world, a correspondent in Nigeria shared what she has observed since the outbreak began there at the end of February.

I was awakened at 3:18 AM on the 28th of February by a message from the Nigeria Center for Disease Control (NCDC), shared by a colleague via WhatsApp. The first case of COVID-19 was confirmed in Nigeria.

Panicked, I dialed my mother, who had traveled for a funeral to Enugu, our village in southeast Nigeria. I warned her not to shake hands with anyone, and to wash her hands as often as possible.

The price of hand sanitizer immediately increased to levels the poor could not afford. They resorted to using gin.

Nigerians are very social people who love to hang out with friends. My city, Owerri, the capital of Imo State, is also called “Ebe Ngwori” — a place of enjoyment. For these warm people, avoiding physical contact is very foreign.

On Twitter, Nigerians began to call for closing our borders and canceling flights from high-risk countries, especially as our health system is weak — in 2019, Nigeria ranked 96th of 195 nations on the Global Health Security Index, which measures preparedness for an epidemic.

I host several radio talk shows, the most popular of which is Darling Clinic, a health show on Darling FM Owerri. Every day I hear from listeners nationwide.

As the pandemic spread, stories flooded in from around the country.

The price of hand sanitizer immediately increased to levels the poor could not afford. They resorted to using gin. Food prices also rapidly increased as states began to close down markets.

In Lagos, the epicenter of the Nigerian outbreak, the state government moved quickly to close schools and ban public and religious gatherings of more than 50 people. The federal government then announced 14-day lockdowns in three states: Lagos, Abuja, and Ogun. Other states began to take precautionary measures as well.

Schools remain closed. In Lagos and Anambra, the government has started school programs via radio and television for secondary school students only.

From Inconvenience to Emergency

At first, it seemed shocking that the funeral for the mother of a colleague had been postponed indefinitely, and that another colleague had paid for the hall for his wedding and sent invitations, only for it to be canceled. Of course, these personal hardships now seem like minor inconveniences. There are many more dire effects of the pandemic here, not the least of which is hunger.

In normal times, just like in any major city worldwide, beggars confront me on the street and ask for money, but I had not been approached in a while. Now, people who are well-dressed are asking. Recently, a carpenter whose workshop is close to my office called out to me as I was passing by. After exchanging the usual pleasantries, he said, “Na Hunger dey worry me oh” — hunger is my major problem now. I gave him some money to buy something to eat.

Milicent Idikacho, a civil servant at Imo State Ministry of Agriculture, has not yet received her March salary and worries that hunger will begin to hit hard. Currently, she is depending on farming — fortunately, it is farming season now in Nigeria.

“I can’t stay at home,” Idikacho said. “Hunger will kill my children and me.” She shared that her blood pressure is high.

My friend’s neighbor had been drying a melon under the sun. After only 30 minutes outside, the melon was stolen.

Food markets reopened just before Easter, and immediately we were concerned that it would adversely affect the curve we are all struggling to flatten. In the capital city, Abuja, mandates require everyone to wear face masks, particularly when shopping at the markets.

Testing is still extremely scarce. The NCDC ramped up testing in Lagos from 2,000 to 5,000 a week, and in Abuja, from 1,000 to 2,000 a week. But in Imo State, testing is infinitesimal: it has increased from six to 10 tests administered per week. The official number of cases at the end of April (1,095) showed severe under-reporting.

Damaris Osunkwo, Commissioner for Health in Imo State, has yet to respond to my inquiry regarding tracing and prevention plans.

There have been reports of patients escaping before being tested — to avoid being isolated. One patient ran from the hospital as soon as he saw health workers fully kitted as if they were traveling to the moon. He too was never tested.

There are allegations that, at the border of Abia State, police have begun to “collect” small sums of money to let people pass. We have similar reports from Akwa Ibom State.

So far, I have no symptoms, but I am not immune to emotions: powerlessness, frustration, isolation. Like so many, I feel caged.

Last week, someone sent me a message on WhatsApp that I wasn’t engaging enough with fans and friends. I lost it and cried my heart out. Looking back, it was a silly reason to tear up, but I guess it had been building up.

As a talk show host, it’s my job not only to answer questions, but also to give as many people as possible a chance to share, which feels especially important at this time. There are so many stories, so many voices to be heard, and so much pain and despair.