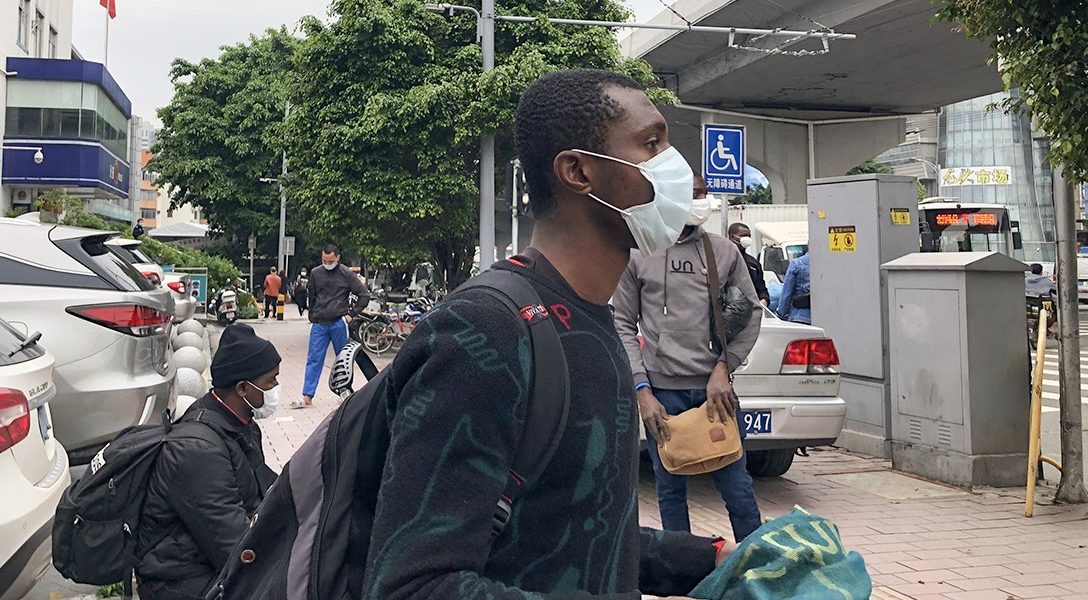 Abara Uduike was enjoying a burger and beer in a restaurant in Guangzhou, China, when a stranger called. The male voice sounded “interrogative,” and demanded that he come home quickly. Despite having no idea who was calling, Uduike rushed back to his apartment.

Ten minutes later, four police officers and three medical workers showed up. The police checked Uduike’s Zimbabwe passport and travel history, and even demanded his phone’s password to access the call history and messages. Then, the medical staff tested Uduike to see if he had contracted COVID-19.

“I don’t know why they had to bring four policemen,” he said. “It feels like I had committed a crime or something.”

During the past three months, many Black Africans like Uduike have complained about racial profiling in Guangzhou, a southern megacity in China. They were subject to random checks from the police, frequent COVID-19 tests, mandatory 14-day quarantines in some cases, and even evictions from apartments or hotels.

Guangzhou is home to the largest African diaspora in Asia. During the financial crisis in Southeast Asia from 1997 to 1999, many African traders doing business in Thailand or Indonesia decided to migrate to Guangzhou, seeking more opportunities or a fresh start.

Roberto Castillo, assistant professor at the Department of Cultural Studies at Lingnan University, Hong Kong, estimates there are 15,000 to 25,000 Africans in Guangzhou. The exact number is unknown because of people who overstayed their visas and are not counted in official lists.

Amid concerns about imported infections and a possible second wave of the pandemic, local authorities started paying more attention to Africans, tracking them down and subjecting them to stringent containment measures.

On April 7, five Nigerians tested positive for the coronavirus in Guangzhou’s Yuexiu District. Four had eaten in a local African restaurant called EmmaFood. Those and other cases sparked fears that Africans were the carriers of the virus. Rumors such as “Black people will create the second wave” or “Guangzhou has sealed off certain regions” spread on social media, even though local authorities said they were false.

As the capital city of a province proud of its manufacturing industry, Guangzhou plays host to large numbers of African traders. In 2017, for example, approximately 320,000 Africans entered or left China through Guangzhou, according to the Xinhua news agency. But the publicity and controversy related to Africans and COVID-19 began changing the attitudes of many shop owners and landlords.

A video showing a notice at a local McDonald’s outlet denying entry to Black people quickly went viral. Widespread criticism prompted the restaurant to close temporarily and apologize. (McDonald’s said the ban on entry for Black people is “not representative of our inclusive values.”)

Again, for those who still doubt that Black people and particularly #AfricansinChina are being targeted we feel it is our duty to share this. A sign at a @McDonalds restaurant seems to make this perfectly clear pic.twitter.com/FaveKrdQHi

CNN also reported that some Africans were evicted from their homes — apparently by private decisions of their landlords, not the government.

While Black Africans have experienced previous racial discrimination in Guangzhou, the pandemic appears to have prompted a new level of xenophobia. Africans say they are more racially targeted than ever before.

Uduike said he was unfairly treated by his gym, which suspended his membership. However, a Canadian friend and workout partner didn’t receive the same treatment. “I was just targeted based on my race,” Uduike said, adding that he doesn’t believe his friend was exempted because he was from Canada, but because he was white.

After the unexpected visit from the “COVID-19 crew,” Uduike contacted his African friends the same day and found all of them had been ordered to self-quarantine within a couple of hours. “We quickly realized that it’s only African people who have been quarantined,” he said. (Uduike is not his real name; to avoid further difficulties with Chinese authorities, he and other Africans interviewed for this story asked not to be identified.)

On April 12, Guangzhou authorities said at a press conference that more than 4,600 people from “high-risk” countries had been screened, received a nucleic acid test for COVID-19, and been incorporated into the virus management system.

During his 14-day quarantine, Uduike was told to activate the alarm on his apartment door, so the security staff would notice if he attempted to leave. He was required to submit his temperature to a nurse every day via WeChat, China’s most widely used social media network. He even had to sign a contract acknowledging that if he broke the quarantine and contracted COVID-19, he would face legal consequences.

Uduike blames the government for restrictions on Africans by private businesses, citing a health alert from the US embassy in Beijing, which warned: “Police ordered bars and restaurants not to serve clients who appear to be of African origin.”

“Even though you were outside, you were not able to go anywhere,” said Uduike.

Gordon Mathews, an anthropologist at the Chinese University of Hong Kong, told WhoWhatWhy the crackdown isn’t just about racism. Because some Africans overstayed their visas, Guangzhou authorities feared they might be untraceable carriers of the virus.

“If you didn’t have records of who they were, then you are going to round up everybody,” said Mathews. “Remember that COVID-19 has caused all kinds of people to panic.”

Another anthropology researcher at the University of Amsterdam, Shanshan Lan, visited Guangzhou to study grassroots interactions between local Chinese and visiting Africans. In a report published in a US academic journal, she wrote that “mutual stereotypes and racialization [existed] on both sides,” partly due to language barriers and cultural misunderstandings. Additionally, she said, Chinese media portrayed visiting Africans sensationally, as a “black threat.”

Many Africans had arrived in China on short-term business visas, planning to buy cheap products and send them back to their home countries for resale. But restrictions on their movements, combined with suspicion from Chinese merchants and manufacturers, made life difficult.

Ekon Selassie, a Nigerian in the fashion business, usually visits Guangzhou to order cheap clothes. This year, he arrived March 8, expecting to stay two weeks. Instead, he was stranded for three months.

While living in a hotel, he was asked to come down to the reception desk for a COVID-19 test. Although the result was negative, police collected his passport without explanation, and it took a week to get it back. Subsequently, hotel staff asked Selassie to check out. He asked why, and the staff told him “no ‘why.’” So he wandered the streets for three hours, inquiring about lodging at more than 20 hotels, but was rejected by all.

“No hotels wanted to accept Black people. If you approach, they would say ‘zoukai’ (go away),” said Selassie. “It feels so bad.”

Finally, he found a hotel that would accept foreigners like him. The next morning, he checked in, but police arrived and told him to self-quarantine. Selassie spent the day with nothing to eat. Finally, his business partner in Guangzhou brought him bread and fruit.

The trader purchased clothes online and had them delivered. But when he hired a truck to carry his merchandise to a pier, the hotel refused to let the vehicle enter its yard. Normally, Selassie would visit the port to ensure his goods were safely packed into a shipping container. But because of the quarantine, he had to tell logistics agents to release the cargo without being able to inspect it.

A few days later, the police came to the hotel, telling Selassie to move again. He protested, and the officers promised he would stay in a “free” quarantine hotel. But the free period lasted only five days and a longer stay would cost $17 per day — well beyond his usual budget.

After hearing complaints of discrimination and mistreatment, African diplomats complained to the Chinese government, condemning the crackdown in Guangzhou as “stigmatization and discrimination.” Back in Nigeria, Femi Gbajabiamila, the leader of the lower house of Parliament, met with China’s ambassador on April 10 to demand an explanation.

Mr Speaker reads the riot act to the Chinese ambassador: We will not tolerate maltreatment of Nigerians in China!!! pic.twitter.com/gblIVVynNz

China already has a high profile in sub-Saharan Africa, with investments and contracts totaling $299 billion from 2005 to 2018, according to the China Investment Global Tracker. Additionally, the country has made $130 billion in direct loans to African nations since 2000. Fears of neocolonial ambitions or “debt trap” diplomacy are often discussed, so the way Africans are treated in China is newsworthy back home.

Diplomatic pressure and news reports helped to ease restrictions for African visitors in Guangzhou. Uduike was allowed to end the quarantine ordered by the “COVID-19 crew” after six days. He emerged from his apartment to find that some Africans were sleeping under a bridge.

He teamed up with volunteers to bring food to the homeless Africans, and pressured Guangzhou’s foreign affairs office to find accommodations for Africans who had been evicted by hotels or landlords.

Uduike, a native of Zimbabwe, has lived in China for eight years. He studied software engineering at Beijing Jiaotong University and launched his career in a start-up tech company in Guangzhou. He said Africans have always been treated differently, even before COVID-19.

“Many landlords would say ‘no’ to Africans,” said Uduike. “These things happen to us every day. It was just [the pandemic] that amplified it and gave it a recognition.” Despite the challenges, he plans to remain in Guangzhou, working as a software engineer, for the foreseeable future.

African nationals aren’t the only group to encounter discrimination. Monique Lin, a Black Canadian teaching English at a university in Guangzhou, said her stay on the campus was like being “in a jail.”

“Whenever I would go to the gates of the school to pick up food or even a package, the guards would not allow me to step out like a foot or two,” she said.

Uduike suggested that Guangzhou should treat Africans and other foreigners as residents and invite them to work as volunteers. “I saw Chinese students volunteering in subway stations to test people’s temperatures,” he said. “I think they should have foreign students joining them as well.” That would show Chinese residents, he said, that Black visitors from Africa and other countries are a resource, not a threat.