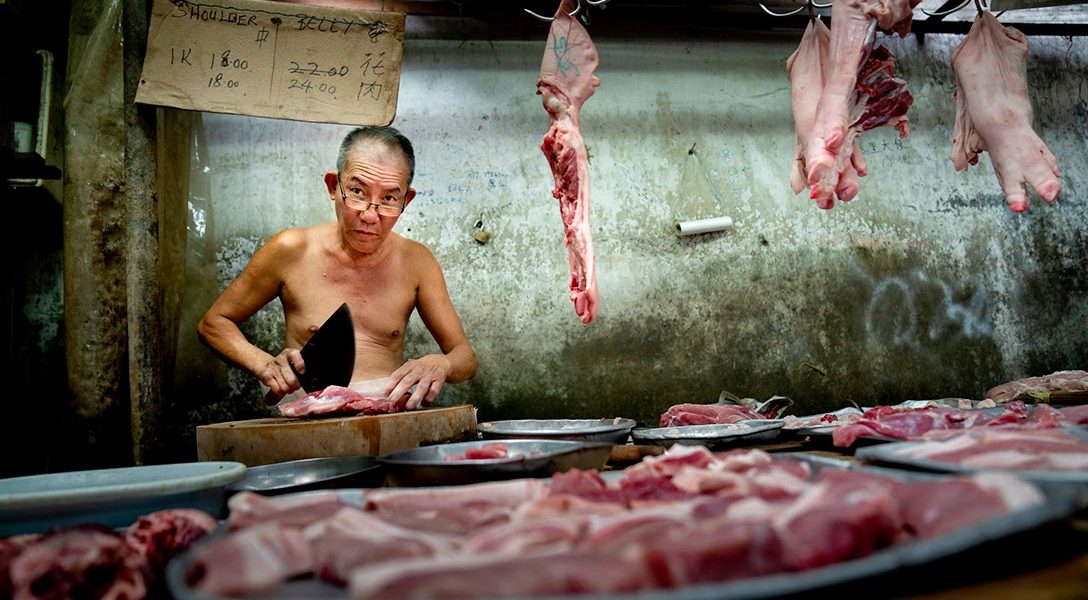 In the age of COVID-19, wet markets in which bushmeat is sold have come under heavy criticism as dangerous places that heighten the probability of zoonotic disease. Photo credit: denise chan / Flickr (CC BY 2.0)
Health & Medicine

The pandemic we face today tells a story about how poverty and inequality can threaten us all.

It is in the less affluent communities that many of the most deadly viruses arise. In such places, people tend to live closer to forests than in the Western world, and they are often poverty-stricken, with little access to schools, hospitals, and jobs, Sarah Paige, senior adviser of the Global Health Security Agenda at CORE Group, explained to WhoWhatWhy.

People are often forced to convert forests into agricultural land for subsistence farming. And they hunt animals, either to provide meat for their own families or to sell at the wet markets in order to make a living.

In the age of COVID-19, wet markets that sell fresh meat, fish, and produce have come under heavy criticism as dangerous places that heighten the probability of zoonotic disease transfer.

These markets are often filled with live and recently slaughtered animals — including wild animals (bushmeat) — and are subject to limited regulation. For years experts have considered them risky. However, because they offer goods at lower prices than other markets, they are crucial for people with little purchasing power.

“Poverty is the driving force in these interactions [between humans and animals],” Eric Lambin, who studies land cover change at Stanford University and at Université Catholique de Louvain in Belgium, told WhoWhatWhy.

Economic development is essential to disrupting the dangerous connection between poverty and zoonotic diseases. Such diseases tend to spread rapidly, infecting the rich and poor alike.

“We live in a world with a very high level of economic inequality. We have enormous prosperity in Europe and North America, and we’ve left the world behind,” said Lambin.

“But it’s coming back to us. Wealth cannot protect us from the pandemic. We can build walls on our borders, but we cannot stop viruses from impacting our economy,” said Lambin.

Tricks of the Virus

Viruses are classic bad guys. They survive only by infecting living things: invading a host organism, using its cells to replicate, and eventually spreading to a new host to repeat this process. This can go on indefinitely as the virus travels quickly from organism to organism, reproducing in new host environments. Most viruses have high mutation rates, making them difficult to nail down.

They infect wild animals, farm animals, pets, and people. Viruses thrive wherever they find a host, spreading through cities and rural areas, wealthy communities and those entrenched in poverty.

Like boogeymen, they’re frighteningly unpredictable. Determining when and where they’ll originate and how their symptoms will manifest is challenging, even for experts.

Although we can’t altogether eliminate the threat they pose, we can take steps toward preventing the spread of zoonotic disease to human populations.

We All Pay the Price

“The ways in which we change landscapes [hold] the potential to increase the likelihood of contact of people and wild reservoirs of infectious diseases,” Laura Bloomfield, a doctoral candidate and medical student at Stanford University, told WhoWhatWhy.

Often this happens when humans encroach on forested areas and develop them for agriculture. When animals lose their territory, they venture outside of its borders, coming into contact with domestic animals and humans. When humans go into the forest in search of resources, again, contact is made. The higher the rate of interspecies contact, the higher the likelihood of zoonotic disease transmission.

“These days we talk about zoonotic diseases as being from animals that infect us. But it is we that go to the habitat of animals. We take their land, hunt them, eat them, and slaughter them,” Colin Chapman, one of the world’s leading authorities in zoonoses research, told WhoWhatWhy.

In order to protect ourselves from future pandemics, society must be more respectful of biodiversity and animals’ natural habitats, experts say.

Chapman, a professor at McGill University, hopes that in light of the current coronavirus pandemic, which has infected over 3 million worldwide, people will be more aware of the fragility and complexity of the environment.

Since the coronavirus appeared on the public’s radar in January, blame has been largely focused on China. However, experts say transmission of zoonotic disease can happen anywhere in the world. For example, AIDS first appeared in Central Africa (caught from primates), MERS originated in the Middle East (caught from camels), and a variety of HantaViruses have appeared in Europe, Asia, and the Americas (caught from rodents).

“Coronavirus could have started anywhere,” said Chapman. “This time it was China, but it didn’t have to be. This is a big picture story.”

Sarah Paige offers this perspective of the big picture: “We have the tools and we have great people around the globe who know what to do and how to be ready for a pandemic,” said Paige.

“This [coronavirus] is a wakeup call to us to pay attention to them. This is so out of control because governments didn’t pay attention to what their public health officials were saying in time. We have learned a really hard lesson.

“Global health problems can feel so absent and far away,” said Paige. “But this pandemic shows how connected we are globally and that we should care about people on the other side of the globe.”