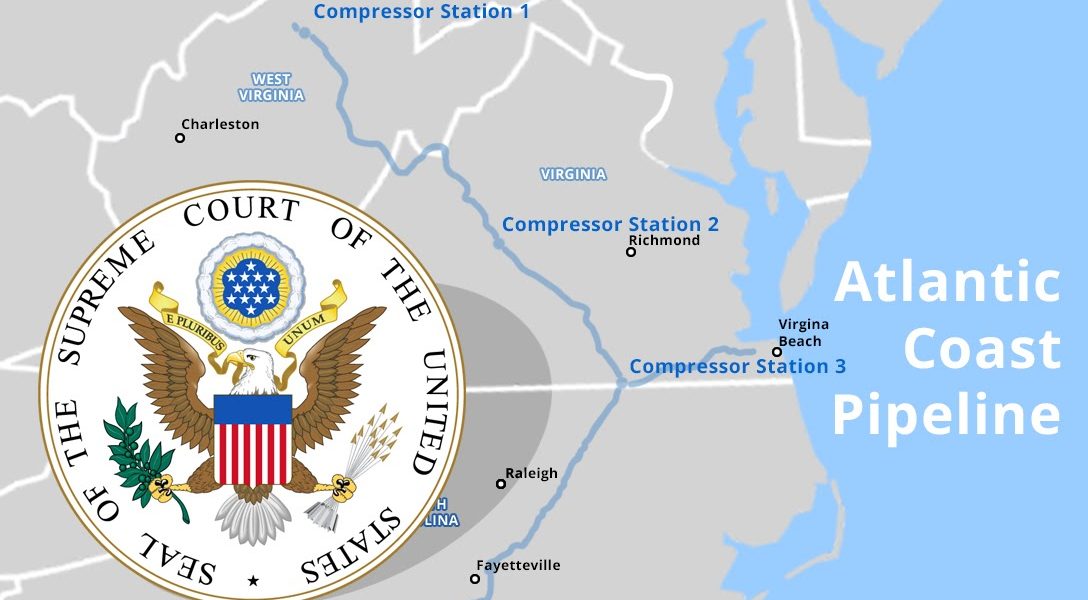 If the legal battle over a controversial pipeline project in the mid-Atlantic were a boxing match, the referee might have stopped it a long time ago. That’s because every round so far has been won by environmental advocates who are opposed to the construction of the Atlantic Coast Pipeline (ACP), and concerned about the impact of a laying pipeline in an environmentally sensitive, steep-forested terrain that includes the iconic Appalachian Trail.

Now, however, the corporate heavyweights on the other side of this fight are hoping for a last-minute reprieve to be delivered by the Supreme Court. And their chances of winning this round seem good.

Until now, the courts have routinely sided with the environmental advocates.

“Every time our clients and partners stood up for their communities, and for the public places they love, and for the rule of law, these permits were tossed out again and again,” said attorney D.J. Gerken of the Southern Environmental Law Center (SELC) in a press conference outside the Supreme Court.

He is right. In its nearly six-year battle against the ACP, the SELC could rely on the United States Court of Appeals for the Fourth Circuit in Richmond to rule in its favor

This week the Supreme Court weighed in, hearing oral arguments in an appeal of a Fourth Circuit decision that made it impossible for the project to lay pipeline under the Appalachian Trail. In December, 2018, the lower court ruled that the US Forest Service lacked the authority to grant the ACP a permit to cross the Appalachian Trail on federal land.

The Supreme Court accepted the appeal, which was joined by the Trump Administration. If their questions are any indication, the justices on the high court were leaning toward ruling in favor of the pipeline.

Hear it for yourself from SELC Program Director D.J. Gerken. pic.twitter.com/4979QBBrYe

The arguments focused on which federal law applies in this situation, and whether any construction on federal land that is part of the National Park System can move forward without the express approval of Congress.

The energy companies contended that the pipeline could not move forward if they lost the appeal: “The whole enterprise is done. We’re done. They have to start over.”

The justices probed the jurisdiction the US Parks Service and the US Forest Service have over the Appalachian Trail, and how that jurisdiction applies not only to the trail itself, but the area 600 feet below the trail, where the pipeline will be laid.

Paul Clement, arguing for the companies, predicted that blocking the pipeline from being laid on federal park lands could have far-reaching consequences for other regions that include land designated as national parks.

Anthony Yang, arguing for the solicitor general, also pushed that theory. Accepting the authority of the National Parks Service over the Appalachian Trail’s federal lands would “dramatically change the trail system by transferring vast amounts of land into the National Park Service,” he contended.

Yang claimed that the [Tennessee Valley Authority’s] two hydroelectric dams would be under the park service’s jurisdiction. He also warned that its authority would extend to “more than a dozen towns, including Hanover, New Hampshire and Dartmouth College,” as well as to “numerous bridges over rivers, including the bridge over the Hudson near West Point, over 600 roads, a hundred interstates and other highways.”

That alarmed Chief Justice John Roberts, who asked environmental lawyer Michael Kellogg whether acknowledging the power of the park service to control how park land is used erects an “impermeable barrier” blocking the transport of oil from more western parts of the country to more eastern regions “where there’s more of a need for them.”

Gerken said that no matter what the Supreme Court decides, the ACP would not be a done deal. “The question before the justices today is narrow but the problems facing the pipeline are very broad,” he said.

“The Supreme Court was considering only one of eight permits … either revoked by the federal courts or withdrawn by federal agencies in response to challenges by community groups,” he added.

Indeed, just last month, SELC racked up another victory in the Fourth Circuit. In a unanimous verdict, three judges threw out a state permit for the ACP to build a huge compressor station in Buckingham County, VA, in Union Hill, a settlement of former slaves that remains predominantly African American. The court found that state regulators failed to consider the “disproportionate impact” on African American residents from a decline in air quality caused by the mammoth compressor.

“Environmental justice is not merely a box to be checked, and the Board’s failure to consider the disproportionate impact on those closest to the Compressor Station resulted in a flawed analysis,” the court ruled.