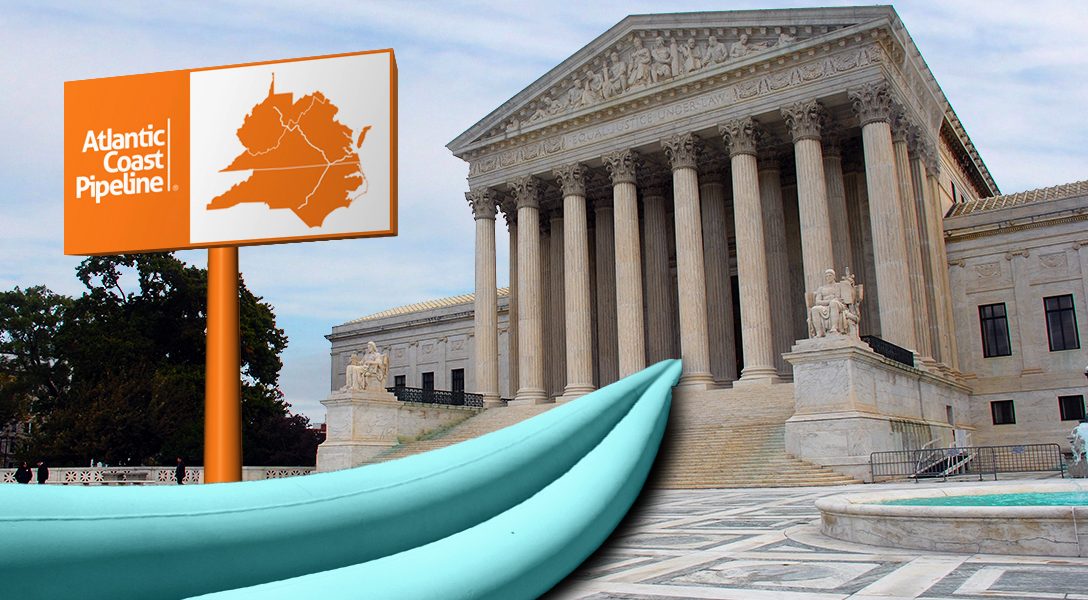 It seems like a David vs. Goliath battle. Since 2014, a coalition of environmental, civil rights, and community groups, along with some local businesses, has fought in court to block a massive $8 billion pipeline.

The anti-pipeline coalition, which is represented by an environmental law firm, is up against a politically connected corporation with 7.5 million customers in 18 states, 21,000 employees, and 2018 earnings of $2.4 billion.

The project, a joint venture led by Dominion Energy, and including Duke Energy, Piedmont Natural Gas, and Southern Company Gas, will eliminate more than 6,800 acres of forest — an area the size of eight Central Parks. It will dispatch an army of nearly 10,000 construction workers, trucks, and earthmoving equipment into the Appalachian hills and the Blue Ridge Mountains. It will be built near ski and fishing resorts and a large yoga ashram.

The pipeline, while not much in the national spotlight, will not only affect people living near its route; it has implications for millions of ratepayers in both Virginia and North Carolina. It also raises concerns about a major utility’s investment in fossil fuels, at a time when carbon emissions are jeopardizing the way humans live in the future.

And until last month, David was winning. The Southern Environmental Law Center (SELC) had successfully argued several cases in federal district court against the ACP. Last December, decisions by the US Court of Appeals for the Fourth Circuit brought pipeline construction to a standstill.

But on October 4, the US Supreme Court agreed to hear Dominion’s appeal of a December 13 Fourth Circuit decision. Briefs are due before the end of the year, and arguments likely will be heard in February or March. The court will issue its ruling by next June.

The Supreme Court’s decision was a bit surprising, since the Dominion case did not involve either a constitutional question or a split in circuit court decisions. Of the 10,000 petitions the highest court receives each year, only 75–85 cases are heard.

Dominion’s suit, however, did have the support of the Trump administration — the US Forest Service also petitioned the court to hear the case; and it will be argued by the US Solicitor General. Sixteen state attorneys general, all Republicans, also supported Dominion’s appeal, although only West Virginia’s attorney general is in a state actually touched by the pipeline.

Speaking to financial analysts, Dominion CEO Thomas Farrell predicted a Supreme Court victory in 2020 and that the pipeline would be up and running by 2022. “We are confident in our legal position and believe the Fourth Circuit’s ruling will be overturned,” Farrell said.

Gregory Buppert, SELC senior attorney, told WhoWhatWhy that he does not believe the high court’s decision to take the case was politically motivated.

But Dominion’s clout has been felt in other ways, he added. “Dominion has used politics and influence to put pressure on federal agencies. … Corners were cut under pressure from Dominion,” Buppert charged.

Dominion did not respond to two requests for comment on this story.

While the pipeline will go through three states, Virginia is where major court battles have been fought. The pipeline’s route across Virginia would traverse two national forests and the Appalachian National Scenic Trail. Its massive compressor station would be located in a historic town whose residents are the descendants of former slaves

The Fourth Circuit has thrown out Dominion’s federal permits, chastising federal agencies for not doing a good enough job evaluating the impacts of the pipeline on endangered species or the region’s scenic vistas, streams and rivers, and national forests.

But will a Supreme Court victory change things?

Buppert said that high court has not been asked to review the entire Fourth Circuit decision — just the portion that ruled the US Forest Service does not have the authority to grant Dominion the right to build its pipeline across the Appalachian Trail “at its preferred crossing point,” on federal lands.

But the Fourth Circuit decision also required the Forest Service to ask Dominion for alternative off-forest routes, Buppert said. And the three-judge panel also faulted the federal agency for failing to “adequately evaluate the landslide risks, erosions, and degradation of water quality related to the project.”

In addition, the pipeline continues to lack seven crucial permits, Buppert said. “All these missing permits have been litigated,” he said. “They’ve either been thrown out by a federal court, or, in some cases, withdrawn by the agencies themselves.”

If Dominion’s appeal is successful, Buppert assumes that the corporation will try to get federal agencies to reissue permits, but SELC won’t stop fighting: “Given its track record of pressuring agencies to cut corners, we’ll be looking at these permits very carefully when they’re re-issued.”

Meanwhile, litigation continues. SELC recently argued another case before the Fourth Circuit, this one opposing the compressor station in rural Buckingham County, challenging the ACP’s air pollution permit from Virginia’s Department of Environmental Quality (DEQ). The compressor will push up to 1.5 billion cubic feet of natural gas per day through the pipeline. Compressors emit toxic chemicals and are noisy, although Dominion has promised its state-of-the-art technology will minimize both.

But Dominion has more than courts and federal permits to grapple with. Projected costs for the ACP have skyrocketed. Originally slated to cost $5 billion, Dominion now estimates that the price tag may reach $7.8 billion.

According to rates set by the Federal Energy Regulatory Commission (FERC), not only can Dominion ultimately pass on the pipeline costs to its ratepayers, those rates can also include a return on investment to Dominion’s shareholders of up to 15 percent. “That’s a part of the story that the public really hasn’t clued into,” Buppert said.

In his testimony before Virginia’s State Corporation Commission (SCC), Gregory Landers, an energy expert commissioned by several environmental groups, used Dominion’s own data to predict that the net cost of the pipeline to ratepayers over 20 years could go as high as $3.5 billion.

In Virginia, with 2.5 million ratepayers, a rate increase must be approved by the SCC.

Dominion has argued that the pipeline is necessary to meet a growing demand for electricity, vital to economic development, and to ensure that the US does not have to rely on foreign sources of energy.

But late last year, in an unprecedented move, the SCC rejected Dominion’s estimates of what it will have to spend to meet future demands for energy. Even after approving the utility’s revised estimates, the SCC remarked that the corporation “may significantly understate the costs facing Dominion’s customers.”

Even Consumers Union has weighed in. The nonprofit commissioned its own study of Virginia’s energy needs, concluding that Dominion’s strategy of taking on new expensive projects to expand its energy supply was not necessary, and faulting the corporation for not doing enough to conserve energy.

“Rather than spending billions of dollars in new infrastructure projects — costs that would be passed on to Virginia customers — Dominion could meet most of its future energy needs through smart energy efficiency projects,” said Shannon Baker-Branstetter, senior policy counsel for the nonprofit consumer group.

Buppert agrees. “In VA and NC, our states are moving away from fossil fuels towards renewable energy.” ACP is a “backwards-looking … multi-billion dollar investment in a fossil-fuel infrastructure that will be in the ground for decades.”

Despite the studies to the contrary, Dominion might still have the most powerful weapon — its longtime political clout. Over the years, Dominion has given generously to both Democratic and Republican lawmakers in Virginia, and to federal candidates and elected officials.

Since 1990, Dominion Energy (formerly known as Dominion Resources) and its affiliated companies and executives have given $11.2 million to Democratic and Republican candidates in the US House of Representatives and the US Senate, and to House and Senate party committees, according to federal election data compiled by the Center for Responsive Politics.

CEO Farrell has certainly felt confident about the pipeline’s future. “We expect ACP to contribute to operating earnings in 2019, 2020, and for decades to come,” he told financial analysts in March 2019.

While the final chapter on the ACP is yet to be written, the project has had one consequence: It has energized average citizens, said Lewis Freeman, executive director of the Allegheny–Blue Ridge Alliance, a coalition of 51 community and environmental groups.

Freeman got involved in 2014, a few months before Democratic Virginia Governor Terry McAuliffe stood next to Dominion’s Farrell to announce the massive project. Freeman continues to be worried about the real-world implications of the project for him and his neighbors, and for the public in general.

In Bath County, he said, “the pipeline would go through the middle of an existing, iconic resort … that attracts people from all over the world — Fort Lewis Lodge.” It would have to shut down during construction, with its long term future in question, he said. Another major resort — Wintergreen in Nelson County — would also be affected.

Pipeline construction will require ACP engineers to shear the tops off some mountain ridges. When Freeman asked an engineer what they would do with all that rock and soil, the engineer responded that the materials would be “‘carefully set aside’ and then ‘put back the way it was.’ Well, you don’t have to be an engineer to blink at that,” Freeman said. “Are they gonna put it back with Gorilla glue?”

Freeman and other opponents fear that this type of construction through environmentally sensitive regions will dump much more dirt and rock into the streams and rivers that ultimately feed into the Potomac and James rivers, degrading water quality throughout the state.

The Supreme Court’s decision to hear Dominion’s appeal was a “disappointment,” Freeman said. But he doesn’t view it as a “setback … we will have our day in court.”

“Notwithstanding the length of time this battle has gone, I marvel at the people and organizations that have, from the early stages, opposed this project,” Freeman said. “Most of our members are community groups, citizens groups, many of which were formed as a result of the pipeline proposal.”

These “involved activists had never been involved in a fight like this before,” Freeman added. “So when Dominion talks about the ‘wild-eye environmentalists,’ they’re mischaracterizing who their opposition is. They’re everyday people who just think this is a lousy project in the wrong place.”