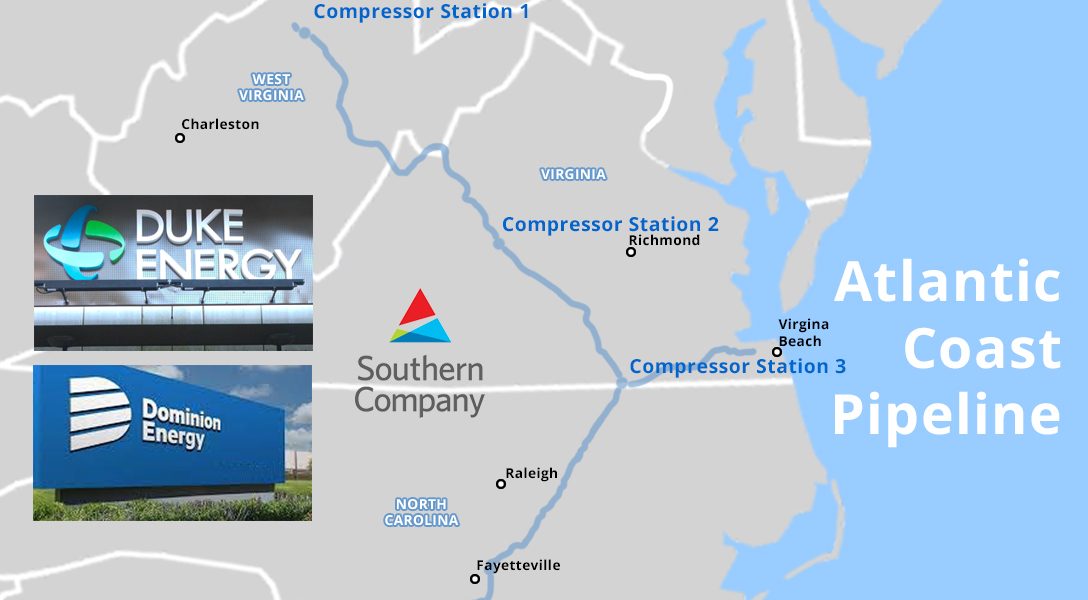 The tide may be turning for the massive Atlantic Coast Pipeline (ACP). Out of the glare of the mainstream media spotlight, environmental groups and residents living in the rural areas of Virginia, West Virginia, and North Carolina that the 604-mile $7 billion project will touch have been protesting its construction for years — warning of its potential damage to forests, streams, and environmentally sensitive mountain slopes.

Over the past year, the courts have been listening. Last week, the US District Court in Richmond, VA, handed the protesters their biggest victory yet. The court decision has so dramatic an impact on Dominion Energy’s future plans that the energy giant is reportedly asking Congress to include a rider in a must-pass spending bill to override the judge’s ruling.

On December 13, a three-judge panel invalidated a permit from the US Forest Service that gave Dominion and its partners the OK to build its pipeline in the George Washington and Monongahela National Forests, and to cross the iconic Appalachian National Scenic Trail.

Related: Will Activists Be Able to Stop the Atlantic Coast Pipeline?

Judge Stephanie Thacker wrote the decision, which stated that the Forest Service did not have the authority to give Dominion permission to cross the Appalachian Trail and violated federal laws in permitting pipeline construction in sections of the national forests.

The decision criticized the agency for initially raising concerns about the threats a pipeline could pose, including landslides and pollution of groundwater, and then backing away from its warnings “suddenly and mysteriously” to meet the company’s timelines.

Citing Doctor Seuss in the decision, Thacker wrote: “We trust the United States Forest Service to ‘speak for the trees, for the trees have no tongues.’”

The Southern Environmental Law Center, which successfully argued the case, insists that neither the Forest Service nor the National Parks Service has the authority to give this permission.

“No federal agency has authority to allow Dominion to cross the Appalachian Trail on federal lands,” Greg Buppert, senior attorney at the law center, told the Richmond Times Dispatch.

The stunning and dramatic decision makes a controversial state vote this morning almost anticlimactic. Members of the Virginia Air Pollution Control Board will be asked to approve a permit to build a massive compressor station in the Union Hill neighborhood of rural Buckingham County, an area settled by freed black slaves beginning before the end of the Civil War. Residents and environmental groups have strongly opposed the huge compressor station, which will push up to 1.5 billion cubic feet of natural gas per day through the pipeline, raising concerns about noise, dust, and possible health impacts from the enormous industrial operation.

The pending board decision drew even more attention after Gov. Ralph Northam (D) replaced two members of the seven-member board who had raised concerns about the approval, just a few weeks before the vote. Northam’s move was roundly criticized by environmental groups.

“We look forward to seeing what happens Wednesday,” Lee Francis, deputy director of the Virginia League of Conservation Voters (LCV), told WhoWhatWhy. But even if the board votes to approve, it won’t matter much, he added.

“At the end of the day, as it stands, Dominion can’t build a pipeline that connects to that compressor station because the courts have thrown out their permits.”

Related: Dominion Energy Pulls Out All Stops for Pipeline Win

According to Dominion, the ACP “is a critical infrastructure project that will strengthen the economic vitality, environmental health and energy security of the Mid-Atlantic region.”

But the pipeline also will eliminate thousands of acres of forests. It will dispatch an army of nearly 10,000 construction workers, trucks, and earthmoving machines into the Appalachian hills and the Blue Ridge Mountains. The project also will require the construction of three large compressor stations along the route.

Recent decisions by the courts and state regulators have heartened pipeline opponents, but a lot of wild cards remain in play.

Dominion may appeal the Fourth Circuit’s most recent decision, either to the full US Fourth Circuit Court of Appeals, or to the Supreme Court.

As it works the courts, however, the energy giant may also be working the halls of Congress. Dominion spokesman Aaron Ruby reportedly affirmed the corporation’s intention to ask Congress to include a provision in an omnibus spending bill that would specifically allow the pipeline to cross the Appalachian Trail. (Dominion has not replied to WhoWhatWhy’s requests for confirmation.)

“I think right now Dominion is in crisis mode, trying to get a ride [on the omnibus spending bill] to get the act from Congress that they need to cross the Appalachian Trail,” Francis said.

“It’s also telling that every time the project has gone to court, they’ve lost,” he added.

In May, the Fourth Circuit ruled that federal regulators failed to adequately protect endangered species on the pipeline route. Dominion is appealing the court’s decision to halt some pipeline work and is attempting to narrow the area covered by the court’s stay.

In yet another decision, the Fourth Circuit challenged the failure of the Army Corps of Engineers to require a site-by-site analysis of the environmental impact of pipeline work on numerous waterways in its 604-mile path.

“So at the moment, work on both the Atlantic Coast and the Mountain Valley pipelines is halted for stream crossings,” Doug Wellman, vice president of the Friends of Nelson County, told WhoWhatWhy.

Virginia state regulators also have been challenging the pipeline project.

On December 7, Virginia’s State Corporation Commission rejected Dominion’s integrated resource plan, which projected energy needs in the state over the next 15 years. The Commission found that Dominion had overestimated the state’s future energy demand.

The unusual rebuff of the energy giant may affect the ACP, since the utility has argued that, because of the region’s growing needs, the pipeline is vital.

Today, December 19, the Virginia Air Pollution Control Board will decide whether to approve Dominion’s request to build a massive compressor station in the Union Hill neighborhood of rural Buckingham County.

When Northam replaced two members on the Board last month, state officials insisted that the move was routine — their terms had expired several months before. However, the members who were asked to leave — Samuel Bleicher and Rebecca Rubin — had raised questions and concerns about the compressor.

After a public outcry over the board reshuffle, Northam said that the two new members of the board will not vote Wednesday, leaving only four members to decide the fate of the compressor. (One member had recused himself.)

“It looks like the governor put his thumb on the scale, intervened in the process [which is] not supposed to be subject to governmental intrusions,” Wellman charged. “When you take two people that were raising questions about the appropriateness of this compressor station and its location and all of a sudden pluck them off the board after they’ve gone through an extensive process of reading, and being briefed, and listening to comments from the public, … this just seems egregious.”

Northam has long benefited from the political support of both Dominion and the Virginia LCV. According to the Virginia Public Access Project, Dominion’s contributions to Northam over his career were about $200,000, while the LCV has funneled nearly 15 times that amount, close to $2.9 million, into his campaign coffers.

“We think he made a mistake,” the LCV’s Francis said. But Francis blamed Northam’s errors on the governor’s over-reliance on regulatory staff who lack the resources they need. He praised the governor for recently plumping up the Department of Environmental Quality’s budget by $2.5 million.

He pointed out that the controversy may also help move the fight against the pipeline to a larger public stage. “I think politically it’s growing as an issue, it’s an issue that is resonating more with the public outside of the folks along the route,” Francis said.

“Other folks in different parts of the state are looking at it as a ‘Can we trust the Governor’ type of issue. That’s the bigger picture. I think that’s something the administration felt in the wake of what happened with the Air Board. In a lot of ways, the optics are changing, and they’re changing really quickly.”