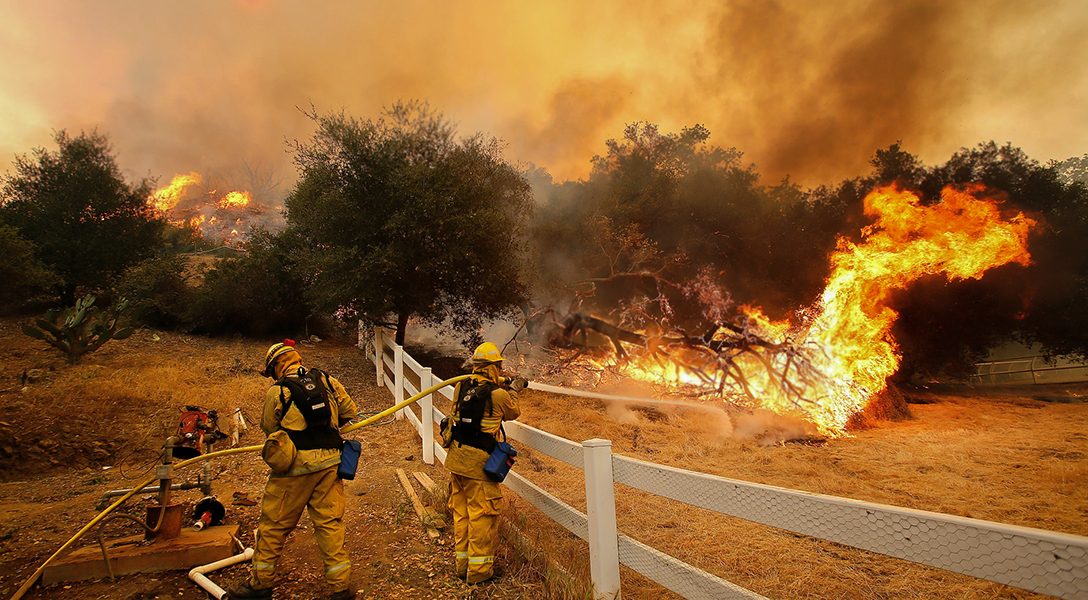 In 2018, a team of private firefighters very publicly saved the home of celebrity millionaires Kim Kardashian and Kanye West in Hidden Hills, CA.

This year, as private firefighters once again protect the property of the wealthy, tens of thousands of rural California homeowners have been left with insurance cancellations and rate increases, forcing them into less comprehensive insurance programs, such as California’s FAIR plan, according to Reuters. This has sparked a debate over the advantages of wealth in a time of extreme weather, and raised questions about what the future of emergency protection will look like.

For decades, wildfire wasn’t on the radar of insurance companies. But now, after years of unprecedented fires, they’re getting pummeled with losses and are scrambling to reduce them, explained Pat Derland, a 30-year wildland firefighting veteran and director of Stone Creek Fire LLC.

That’s where offering fire protection services comes in. Providing fire protection allows insurance companies to avoid losses by proactively protecting the homes they insure, rather than rebuilding them from the ground up, explained Zac Taylor, who studies the intersection of  climate change and insurance at the University of Leeds in England.

Some insurance companies have been more ambitious with this than others. “The folks that have really invested in saving their clients’ homes during wildfires are high-net-worth companies,” said Derland.

In 2005, insurance company American International Group (AIG) led the way. AIG offers wildfire prevention and protection with its own team of full-time and credentialed wildland firefighters. The service is available at no extra cost to their Private Client Group, an arm of the insurance company for high-net-worth individuals described as “comprehensive insurance solutions for successful individuals & families,” in a statement on its website.

Although the insurance companies respond to active fires in real time, the crux of the services offered is preventative. Measures include moving brush, cutting down trees close to homes, providing fire gel, and replacing vents. “This is not glamorous firefighting,” said Derland.

A firefighter surveys the remains of his family’s home after the Santa Rosa wildfire in 2017. Photo credit: Staff Sgt. Daniel Phelps / travis.af.mil (CC0) /

It was about time for insurance companies to get involved, he added. “As wildfires start to reach communities, everyone needs to work together.”

The United States Forest Service (USFS) is responsible for a plethora of tasks, firefighting being just one of them. However, over the past few years, fire has consumed a majority of the forest services budget. USFS projects that by 2021, 67 percent of its budget will go to fire management.

According to Derland, private insurance fire brigades are filling in the gaps by providing extra protection to those who pay for it.

“It’s not discrimination, it’s economics. I know one example, with one company, one individual was paying over one million dollars a year to provide protections. Not everyone can afford to send their kid to private school. Not all of us can afford a Range Rover … Some people have a ton of money and can afford insurance companies that will better protect their homes,” said Derland, declining to reveal the details of the example he spoke of.

As climate change worsens, privatized firefighting will become ever more important. Companies like AIG have a proactive approach — looking at problems before a fire occurs.

“They are on the ground, making a difference. There aren’t enough companies like that by any means,” he said.

Taylor tells a different story. “The wealthiest in society are pulling up the proverbial gate over the moat. They are increasingly removed from the rest of us, politically, physically, and in indifference to the vulnerability of other people. Private insurance is a growing market to protect those who have and move beyond those who have not.”

Since the 1980s there has been a retreat of the state, brought on by a strong anti-tax movement. Ideological pressures and privatization have eroded the capacity of the state to provide a comprehensive infrastructure to citizens, explained Taylor. “Infrastructure and public services are like a tightly woven tapestry holding us together. The tapestry is coming undone.”

“Unequal access of services is already here,” he continued. “We are losing the ability to democratically make sure that management of risk is a reliable, equitable, and accountable public service.”

“In America, we believe that wealthy people have the right to pay more to protect their interests and give themselves greater opportunities. It exists in our healthcare system, it exists in our education system, it’s a central organizing system of life in the United States,” said Taylor. “We can already see a future where climate change exacerbates that.”

No matter how you feel about the existence of private firefighters that protect the rich, they are an early symptom of the convergence of climate change and inequality — two of the greatest man-made disasters of all time.

They may be the first, but they won’t be the last.