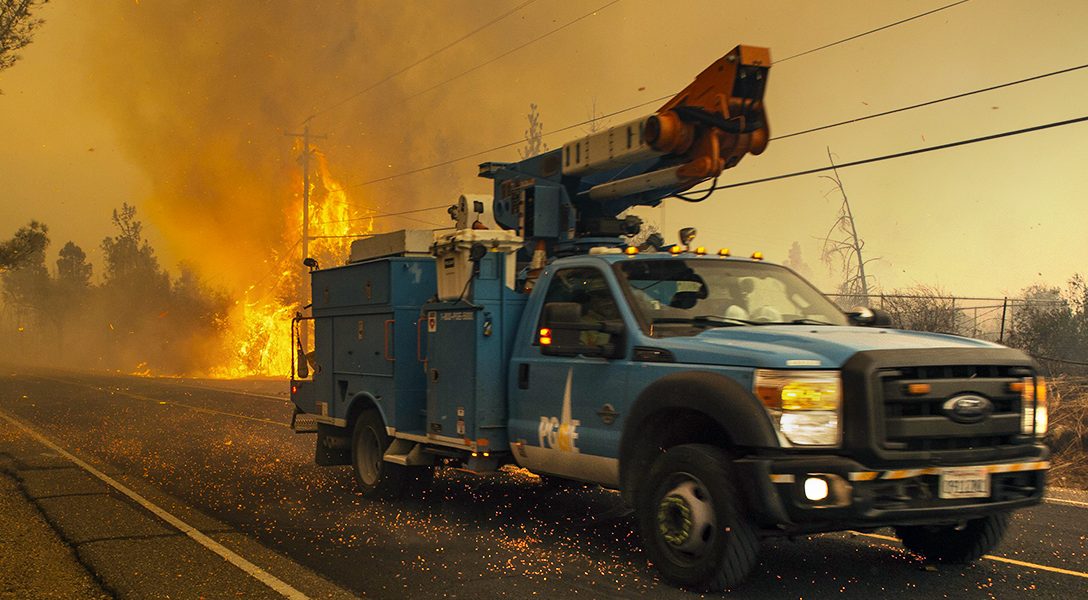 A PG&E truck makes its way past a hot spot during the Camp Fire in Paradise, California, on Thursday, November 8, 2018. Photo credit: © Hector Amezcua/Sacramento Bee via ZUMA Wire
Business Technology

Shoddy maintenance and flawed record keeping by PG&E Corporation (and its subsidiary Pacific Gas & Electric Company) — along with faulty oversight by state regulators — have been implicated in deadly blazes like the Camp Fire, which killed at least 86 people and destroyed the town of Paradise in November 2018.

If approved by the court, the PG&E bankruptcy would be the largest utility bankruptcy in US history and the sixth-largest corporate bankruptcy ever. The company has assured its customers that victims’ claims would receive adequate attention and compensation. But critics are crying foul, saying this is just a tactic to evade responsibility for its negligence.

PG&E justified bankruptcy as a necessary step to keep the company solvent in the face of wildfire liability. The costs of those liabilities may top $30 billion. Not only did the company claim that bankruptcy proceedings would not interfere with basic service and inconvenience customers, it insisted the action was a necessary step to fairly settling the wildfire claims.

Grassroots activists could not agree less.

One larger question raised by the proceedings: Is PG&E a unique case in the wake of a one-off catastrophe or a harbinger of things to come for other utilities throughout the country in an era of ever-more-frequent natural disasters?

At immediate issue is whether the bankruptcy is a financial necessity or a maneuver by the company to shortchange fire victims, pass costs on to consumers, and manipulate the state legislature into passing more laws shielding them from liability.

A spokesperson for the company stated that Chapter 11 would provide an orderly and efficient way of resolving wildfire liabilities. The process will allow PG&E to fully consider these claims and, if PG&E is found to be responsible for them, the process will ensure claimants will receive full compensation in a fair manner, a PG&E spokesperson said.

Consumer advocates assert that PG&E is using the bankruptcy process to get ratepayers on the hook for the company’s liabilities — and shareholders off the hook. They note that, in 2017, the California legislature passed a bill that allows PG&E and other utilities to raise rates to pay for some of their wildfire liabilities.

“It [bankruptcy] provides more safety for shareholders and creditors than it does for customers. Customers and fire victims are the low priority in a bankruptcy proceeding. In fact, they have no voice at all,” Mindy Spatt, communications chief at The Utility Reform Network, told WhoWhatWhy.

Bankruptcy skeptics have been bolstered by a recent report by BlueMountain Capital Management, a hedge fund with investments in PG&E. The report concluded that the company was solvent and bankruptcy proceedings were unnecessary.

The Utility Reform Network (TURN) is a consumer advocacy group headquartered in San Francisco. It was originally founded on the premise that the interests of California consumers were underrepresented before the California Public Utilities Commission. TURN recently demanded that PG&E customers should have formal bankruptcy court status. In a letter to bankruptcy trustees, the group stated that “typical bankruptcy proceedings only have creditors as key parties who are deciding how to pay themselves off.”

“It’s critical to have ratepayer representation in PG&E’s bankruptcy … Fire victims and ratepayers must have their interests protected, because the court might not,” stated TURN spokespersons.

The bad blood between PG&E and grassroots consumer groups did not happen overnight. It has been coming to a boil for decades.

Even before the recent deadly wildfires, PG&E’s commitment to safety had been questioned. In 2010 a gas explosion killed eight and destroyed a San Bruno neighborhood. Federal investigators concluded the San Bruno disaster was caused by a deadly combination of PG&E’s flawed record keeping, shoddy maintenance, and state regulators’ lazy supervision of the utility. State fire investigators have determined that PG&E’s equipment was the cause of 17 destructive fires in 2017.

PG&E has disclosed it suffered equipment failures near the starting point of the Butte County blaze in 2018, which killed at least 86 people and destroyed the town of Paradise. That blaze became known as the Camp Fire and is rated to be the most deadly, catastrophic wildfire in California history.

“PG&E is unique. Has any other utility been implicated in as many deaths as PG&E?” Spatt asked.

And, the friction between grassroots organizations and PG&E includes more than the issue of wildfire liabilities. The 2019 bankruptcy has not been the first for the utility. In 2001, PG&E filed for bankruptcy in response to the wild price swings caused by energy deregulation.

Activists still remember that the costs for the 2001 bankruptcy and the price hikes caused by deregulation were ultimately borne by California ratepayers. Many observers feel that the settlement in the first bankruptcy and the subsequent hike in energy prices was a decisive factor in the successful recall of the governor at the time, Democrat Gray Davis.

“If there is another bailout or bankruptcy that lands too hard on the ratepayers’ backs, then this governor is going to have as long a political life as Gray Davis,” Court warned.

And there are other ghosts from past political battles that have come back to haunt PG&E.

In 1993, Erin Brockovich, a legal clerk and environmental activist with little in the way of a formal education, was the driving force behind a lawsuit that accused PG&E of contaminating the drinking water of Hinkley, California, with hexavalent chromium. The case was eventually settled out of court, in 1996, for $333 million.

In January, 2019, Brockovich held a press conference in front of the state capitol in Sacramento, calling for more state oversight to hold the utility company accountable.

“We should all be beyond frustrated. Every one of us should be good and mad. And it is time for the state to get to work. They need to show us their true leadership in holding this company accountable and making these communities whole again,” Brockovich said.

And not all the momentum for holding PG&E accountable is coming from outside activists.

In December of 2018, the California Public Utilities Commission (CPUC) ordered an investigation into the organizational culture and governance of PG&E. In a public statement, commissioners listed the following changes to the firm’s corporate structure that were being considered:

In February of this year, PG&E did announce it will be replacing half of its board of directors. In that announcement, the company stated that new directors with strong safety backgrounds were being considered. In addition, the company canceled $130 million worth of employee bonuses, presumably because of the recent bankruptcy and pending wildfire liability costs.

Both of the actions by the PUC and PG&E have been met with scorn from some in the public interest community.

It’s a “head fake,” Court asserted. The CPUC was “simply doing this to pretend like it is considering this.” He contended the CPUC is in bed with PG&E, pointing out that the CPUC approved $6 billion in bailout bonds for PG&E.

As for PG&E’s replacing half of its board of directors, Court compared it to rearranging the deck chairs on the Titanic, a public relations move. But one of the more far-reaching of the CPUC’s reorganization proposals may have more support.

Is the Thirteenth Time the Charm?

In each instance, PG&E heavily outspent power supporters and defeated the initiatives. But with the company’s recent bankruptcy declaration, there are signs that San Francisco officials are taking another look at a public buyout of PG&E. Mayor London Breed has asked the San Francisco Public Utilities Commission (SFPUC) to analyze the impact of PG&E’s insolvency. “The analysis should evaluate all options including the possibility of acquiring and building electrical infrastructure assets,” the mayor said in a letter to SFPUC General Manager Harlan Kelly.

Other public officials were open to the idea. Democratic State Senator Scott Wiener (San Francisco) said the utility’s bankruptcy provides an opportunity to explore the creation of an independent electric utility.

“There is already a plan in existence for a public takeover of transmission assets. That might be a good place to start,” Spatt said.

A Unique Company, or Canary in Coal Mine?

Some have speculated that PG&E’s difficulties with wildfire liabilities are directly linked to global warming and that the company is a canary in the coal mine for other utilities.

From June to August, 2018, California saw above-average temperatures and below-average precipitation. Parts of California experienced record-low rainfall and near-drought-like conditions through October and November. This, in combination with PG&E’s inadequate tree clearing program, should be a cause for concern for other utilities.

An attorney for the IBEW, a union that has a collective bargaining agreement with PG&E, stated that the period between 2011 and 2014 was the driest in California history since record keeping began.

He quoted a regional forester for the US Forest Service as saying that the number of dead and dying trees has increased, bringing bigger wildfire risks for communities and firefighters. Some local California activists dispute this view of the problem.

“First of all, we are not aware that global warming can cause fires,” Spratt contended. “What we think causes fires was PG&E’s negligence. Calfire investigations found that in 11 of 16 recent wildfires … it was PG&E’s negligence that caused the fires … Global warming or other climate factors may have had to do with how they fires spread so quickly. But they did not cause them,” Spatt said.